It now appears even more likely that the Portland Bureau of Transportation will develop a new neighborhood greenway route on NE 7th between I-84 and the Woodlawn neighborhood. 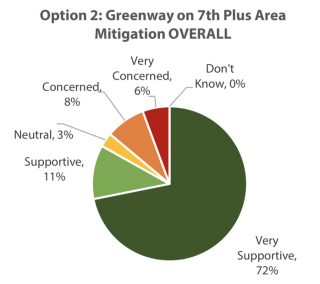 As we reported at the end of February, PBOT launched the public process phase of the project with an open house. Now they’ve released a report based on the feedback from that event and an online survey for the project.

The big question with this project is whether to create a cycling priority street on NE 9th or 7th. From a planning and cycling perspective, 7th is considered the better choice because it’s flatter, more direct, and it connects to the existing network. However, 7th also has a higher volume of drivers than 9th and there are fears among some that if people are prevented from using it in their cars, they’ll drive on adjacent neighborhood streets.

Perhaps fearful of yet another controversy surrounding diversion and cut-through traffic, PBOT is being extremely transparent with this project. They’ve published an 11-page Summary Report and a 35-page appendix with every one of the 300 or so pieces of public feedback they’ve received thus far.

The vast majority of participants were very supportive of building the Neighborhood Greenway on NE 7th with additional monitoring and mitigation of traffic in the area. Supporters for the NE 7th alignment mentioned that it’s a direct connection to Lloyd District, the planned Sullivans Crossing I-84 pedestrian bridge, and other destinations, and addresses traffic issues on NE 7th, i.e. reduces cut-through traffic and speeding drivers.

PBOT heard some support for making the greenway on 9th, but it was “mixed.” Because 9th is so much more quiet and has lower traffic volume, there’s a chance we could end up with something similar to the N Williams Avenue/N Rodney situation. On that project, many people preferred Rodney because it’s quieter and feels safer. In the end, PBOT ended up making Williams the main bikeway route and adding greenway elements to Rodney (like sharrows, fewer stop signs, speed bumps, and diverters).

PBOT says they still haven’t selected a project alignment. “The project team will continue to develop and share design options,” stated project manager Nick Falbo in a recent statement. “The team will bring these more detailed design options to the community for additional discussion and considerations.”

Check the Lloyd to Woodlawn Neighborhood Greenway project page for more details and to stay updated.

Perhaps the reason that PBOT are being so transparent has to do with lessons learned from the N Williams project that also disrupted a neighborhood that is historically underserved due to racism.

It may be that it has been “historically underserved due to racism….” but that neighborhood is gone and in it’s place now are million dollar homes filled with white people.

it is my understanding that the proper term for those living in gentrified homes is “wypipo”.

“The big question with this project is whether to create a cycling priority street on NE 9th or 7th.”

Actually, that question was never asked. In classic PBOT fashion, the fix was in with the formation of the questions. “Option 1: NE 9th and NE 7th OVERALL” & “Option 2: Greenway on 7th Plus Area Mitigation OVERALL”

Option 1 was a mixture of work on 7th and 9th. Option 2 was limited to work on 7th. The very basic question of “whether to create a cycling priority street on NE 9th or 7th” was never actually asked.

Agreed. I take this as overwhelming support despite a confusing question format that made it appear like you could choose traffic calming measures on both streets as an option.

I totally agree with this, which is why I supported both options. They both had a lot of positives. I believe, generally, that bike routes should be focused on these main, local access streets rather than side streets. For instance, NE Knott would make a much better bikeway than NE Tillamook. NE 21st would make a much better North/South route compared to the current jigsaw. I likewise have a preference for NE 7th over NE 9th, but I do appreciate that PBOT is looking at this more holistically than simply picking one street over the other. Of course, I’ll reserve judgment until we see the final project, but I’ve been impressed with the options and the process thus far.

My own two cents. I think it’s time PBOT just bit the bullet to do something right, not just for people biking, but walking, and those that also live on 7th. It’s a major cut thru street for those wanting to avoid I-5/MLK. No one is really going to go out of their way to drive further east, just to cut back west. You have major streets like Interstate to the west and 15th to the east. If they just do it and deal with the crying later, it’ll be good for everyone. I’m tired of great projects on paper but when said project hits the actual pavement, it’s not even close to what it should be.

Completely agree. For me this is a test case as to whether PBOT might be turning a corner. If they go with 9th as the primary route — the politically safe, Zero Vision, autocentric option — I’ll suspect that the status quo of backsliding and stagnation is likely to continue.

Agreed. I’ve been riding 7th on my commute home for the past week or so just to try it out, and it’s not a fun ride north of Broadway (when it drops from bike lane to sharrows.) It took me a day or two to realize it, but when you lose the bike lane, you need to aggressively “take the lane.” If you stay to the right, drivers don’t always realize that the bike lane is gone and it gets a little too close for comfort.

On a related note, I think there should be true diverters on Williams as well. It’s like 100 yards from I-5 (interstate, limited to automobile traffic) and another 100 yards from MLK (a stroad which has it’s own problems, but for now it clearly prioritizes automobile traffic.) Williams/Vancouver would be better served by prioritizing pedestrian traffic as that stretch now houses apartments, shops and restaurants. Nobody is really served with the current setup.

So how can the bike community further push PBOT to choose 7th?

What’s the best email address for PBOT? I was looking at their website and couldn’t find an email for the director.