First of all: next year there will be 1,000 eggs for the egg hunt at the end!

Despite cold temperatures and a bit of drizzle the forecast didn’t anticipate, 150 humans and 4 small dogs came out for the Kidical Mass Easter Ride! Many folks arrived early to Overlook Park and did a terrific job staying warm and motivated while waiting for the crowd to gather. Riding laps around the playground kept several kids warm, while twisting pipe cleaners into bunny ears for bike helmets did the trick for others.

Our ride was 3.2 miles and not a loop (here’s a map of the route on Ride with GPS) so even more kudos to the little pedalers and passengers who ended up doubling the mileage to get back to the start. Kidical Mass rides are often loops to make for easier navigation to and from, and for families who need to drive to the event. 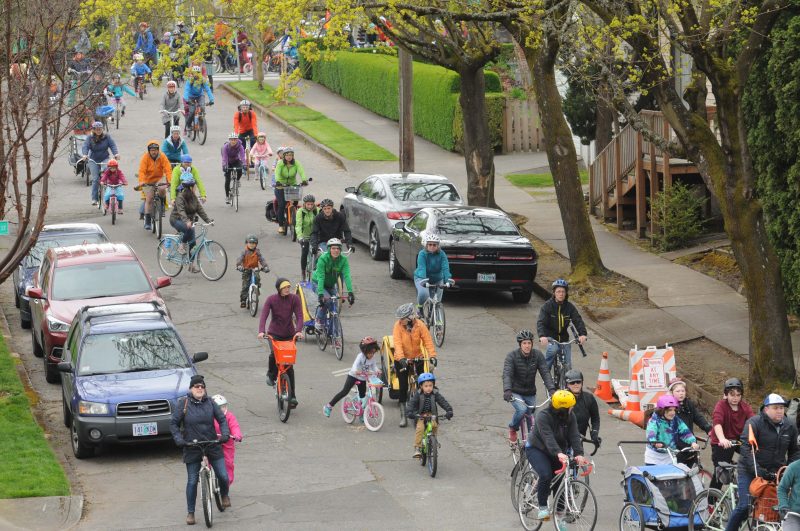 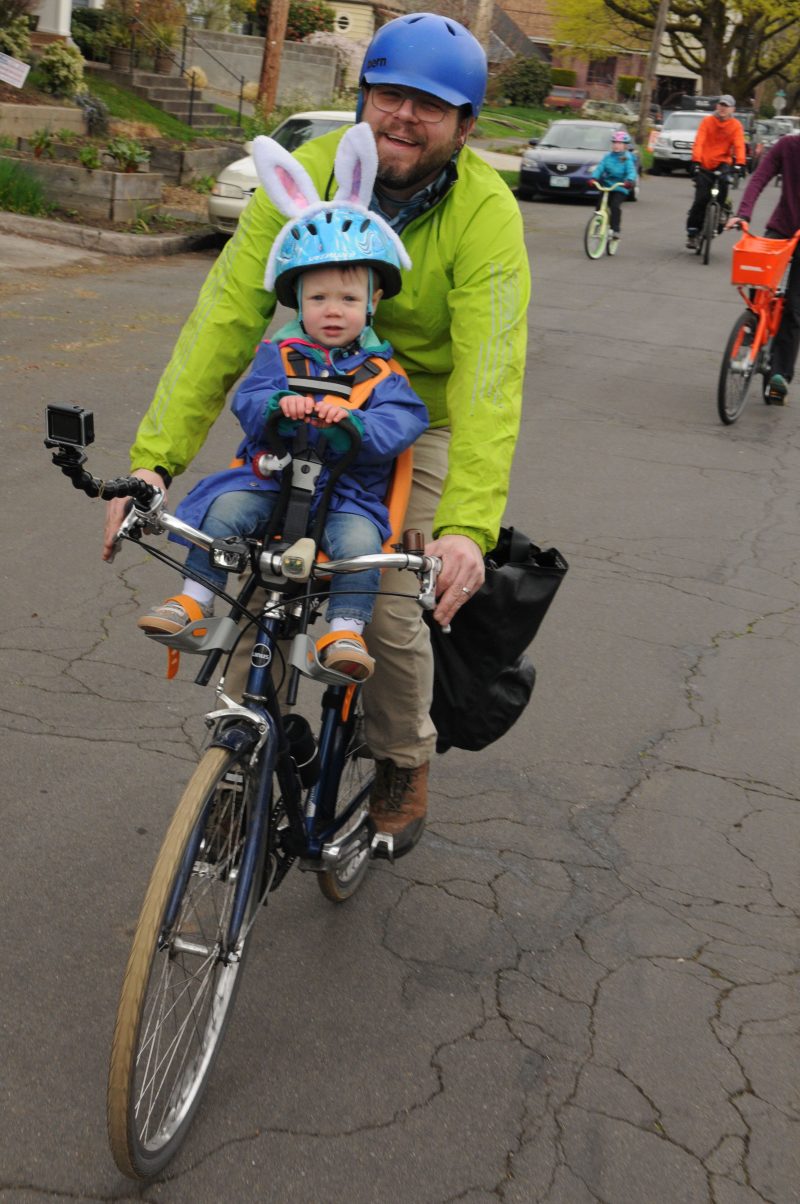 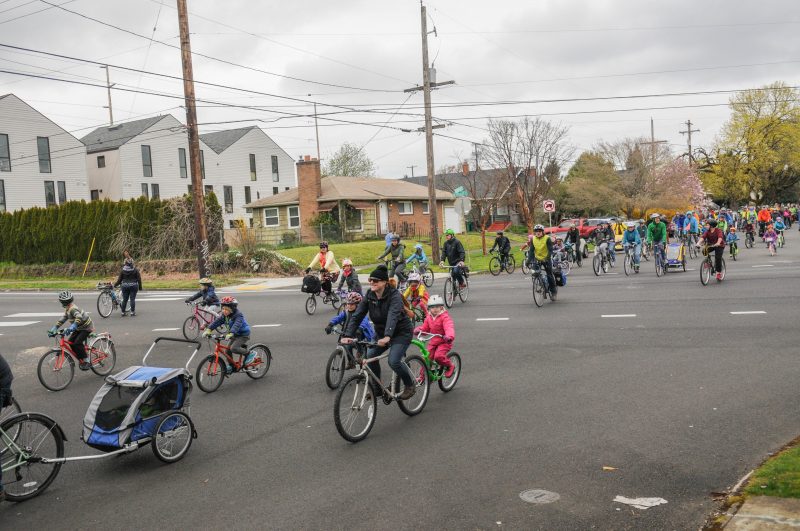 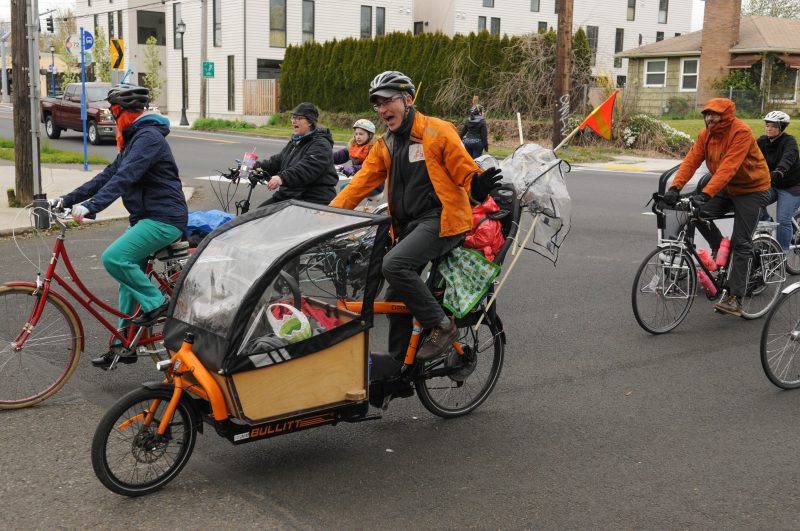 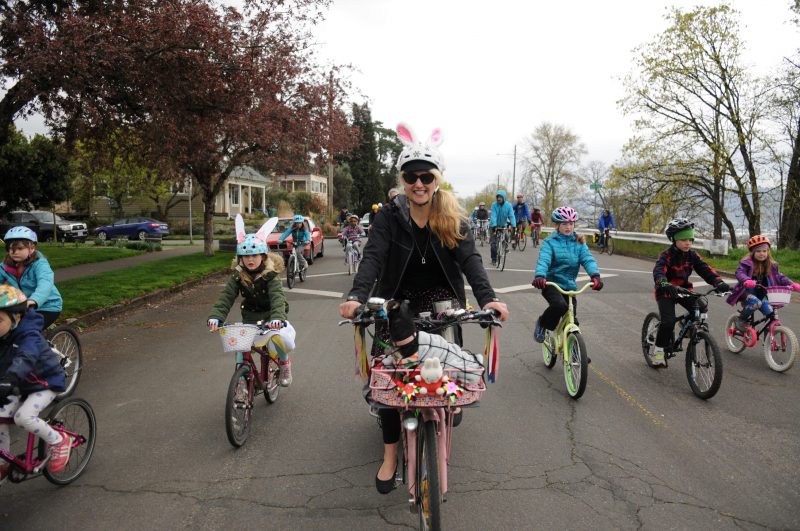 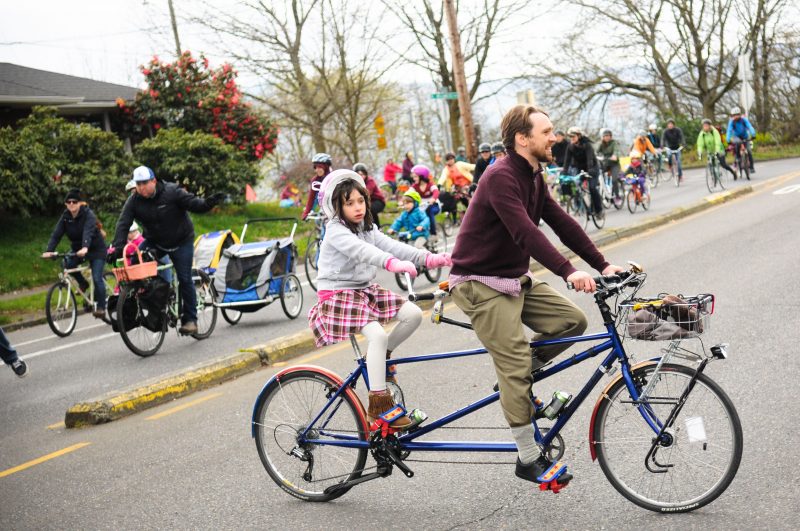 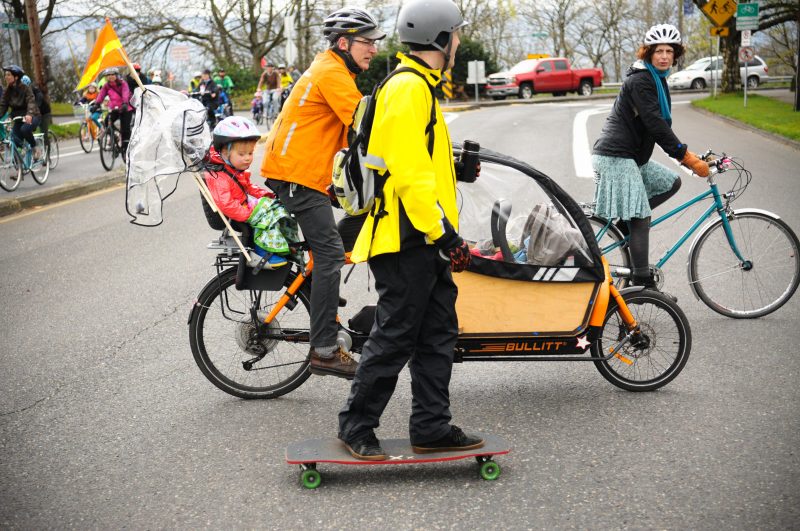 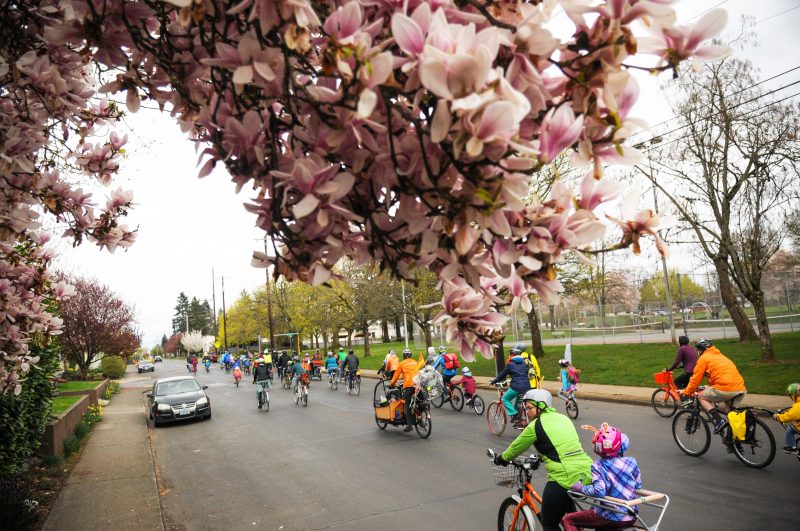 The route was exciting right from the beginning with a crossing over MAX rails to leave the park…and then back over the rails to head west. We crossed through many big intersections and I want to give a special shout out to Kelley Goodwin from Community Cycling Center and Armando Luna, bike volunteer extraordinaire, for helping with traffic control. It’s wonderful to utilize the “safety in numbers” aspect of a big bike parade like this to use big streets and cross even busier streets — and having volunteers “cork” intersections so we can stay in a group and cross through them quickly all in one shot makes for a much more pleasant experience…not to mention easier and quicker for the cross traffic we’re smiling and waving at on our way by.

The spiral ramps on either side of the bridge over North Going Street were slow going as expected, and it was fun to see quite a few kids careen down the downhill spiral after having been stuck walking up the uphill one. This made for a few interactions with the side wall of the ramp, but everyone seemed fine and will hopefully think about using brakes next time! 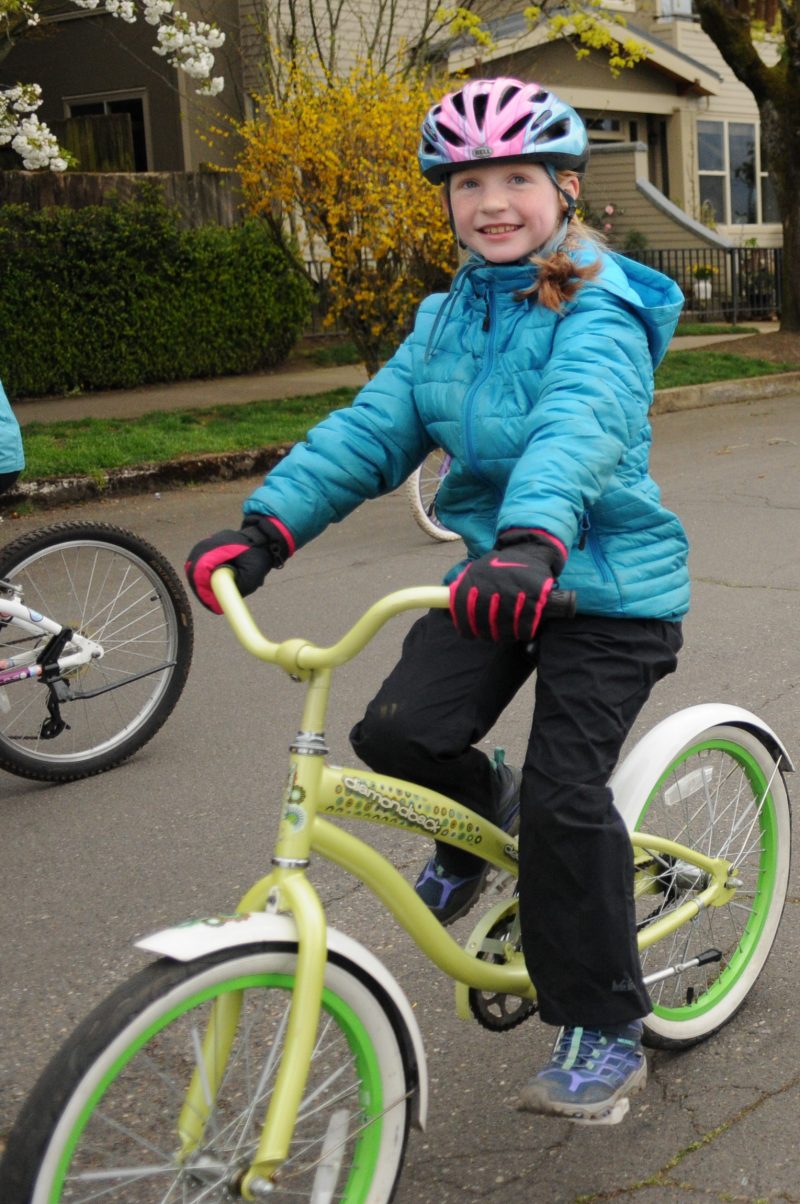 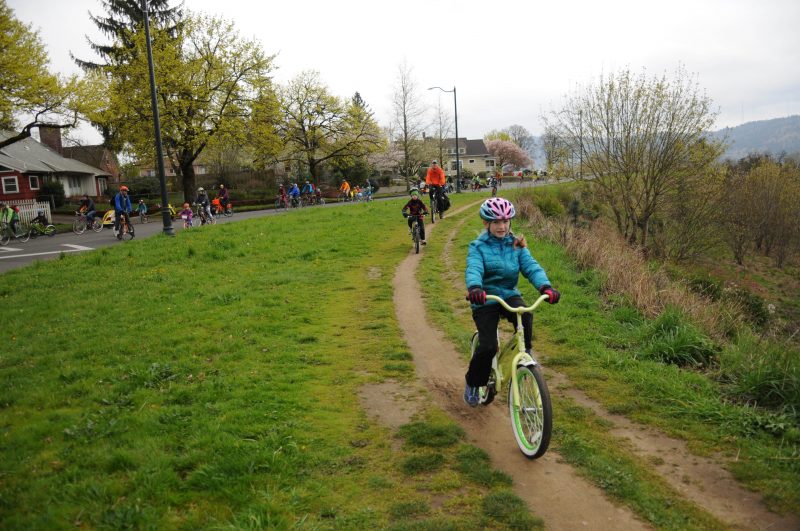 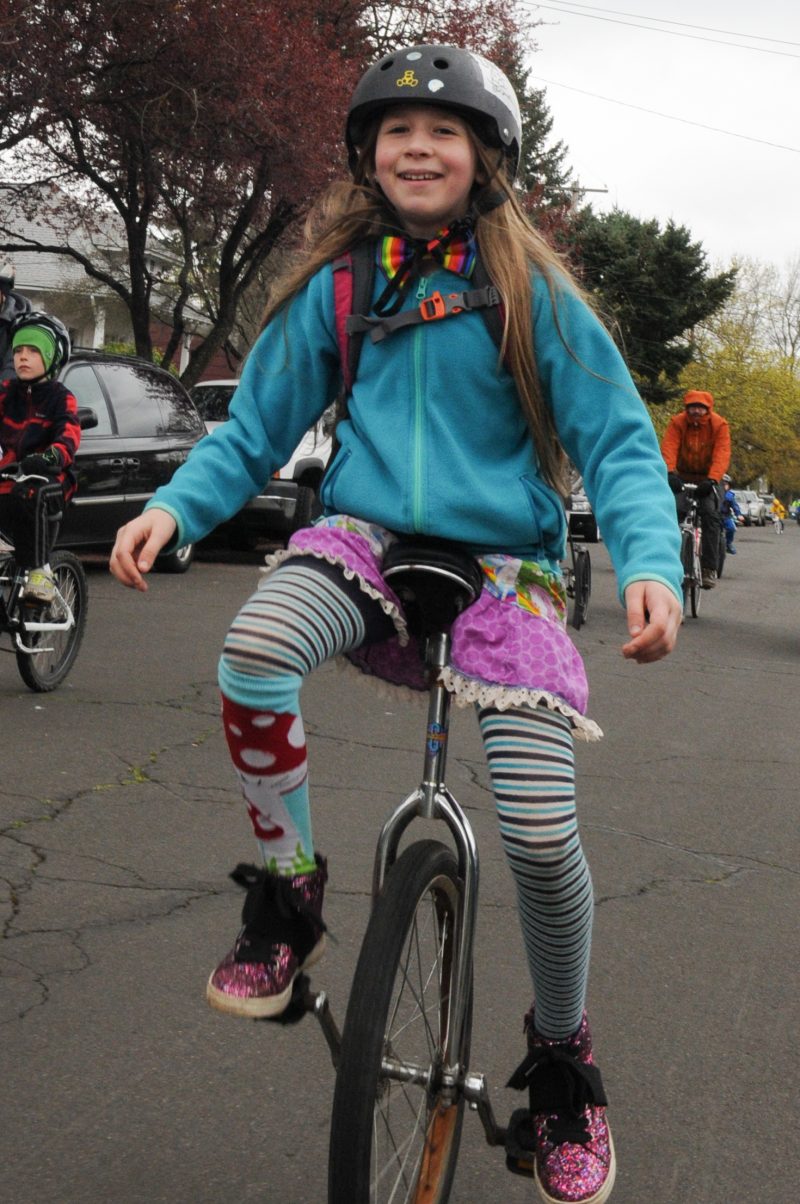 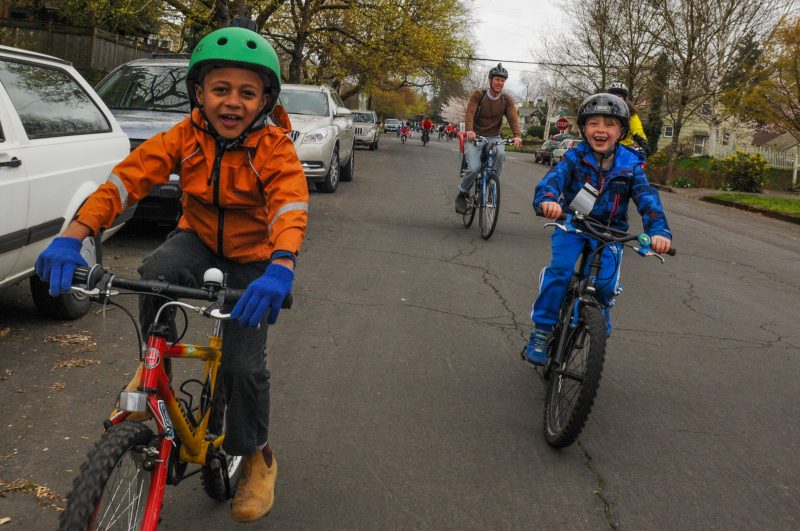 Winding around the Dog Bowl on North Willamette Boulevard is the part of the ride I find the most scenic, and even with today’s grey skies it was breathtaking. And we only take the quiet part of Willamette (south of Rosa Parks) where there are sharrows so we can take the lane and enjoy the view with few (or today, none) cars to worry about. I do hope we made enough space for the few oncoming bike riders we saw because it’s hard not to take up the entire road when it’s so free of other traffic. North of Rosa Parks the street gets busier and bikes have a bike lane so it’s a much different experience.

With a smaller group I would have cut through the park at the end, but it was terrific to ride all the way past Arbor Lodge Park and hear the shouts of recognition from the kids as they saw Harper’s Playground. And when we rounded the corner to the car-free block of North Delaware Avenue on the east side of the park the kids all saw the sprawl of Easter eggs and the the cheering started. 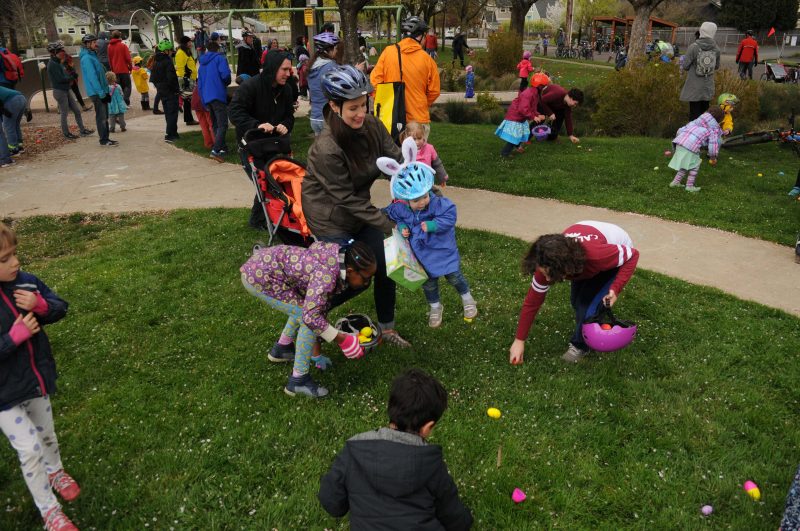 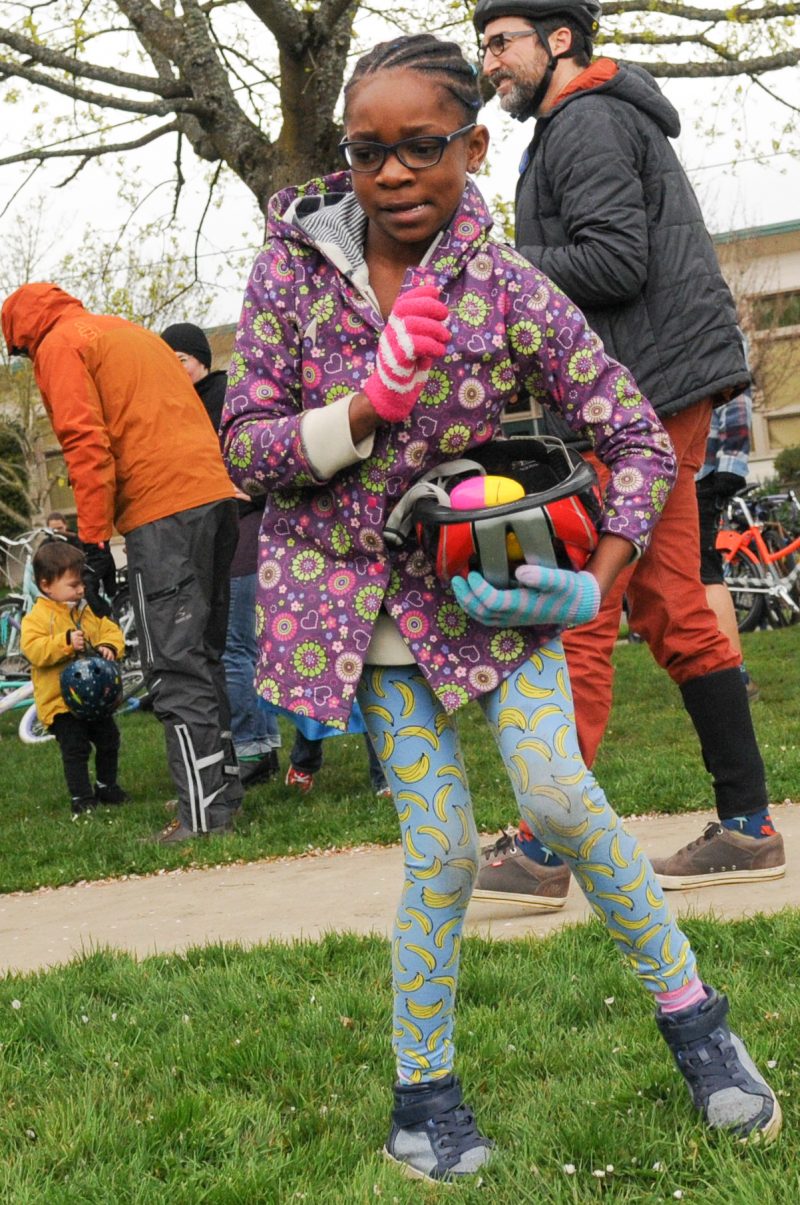 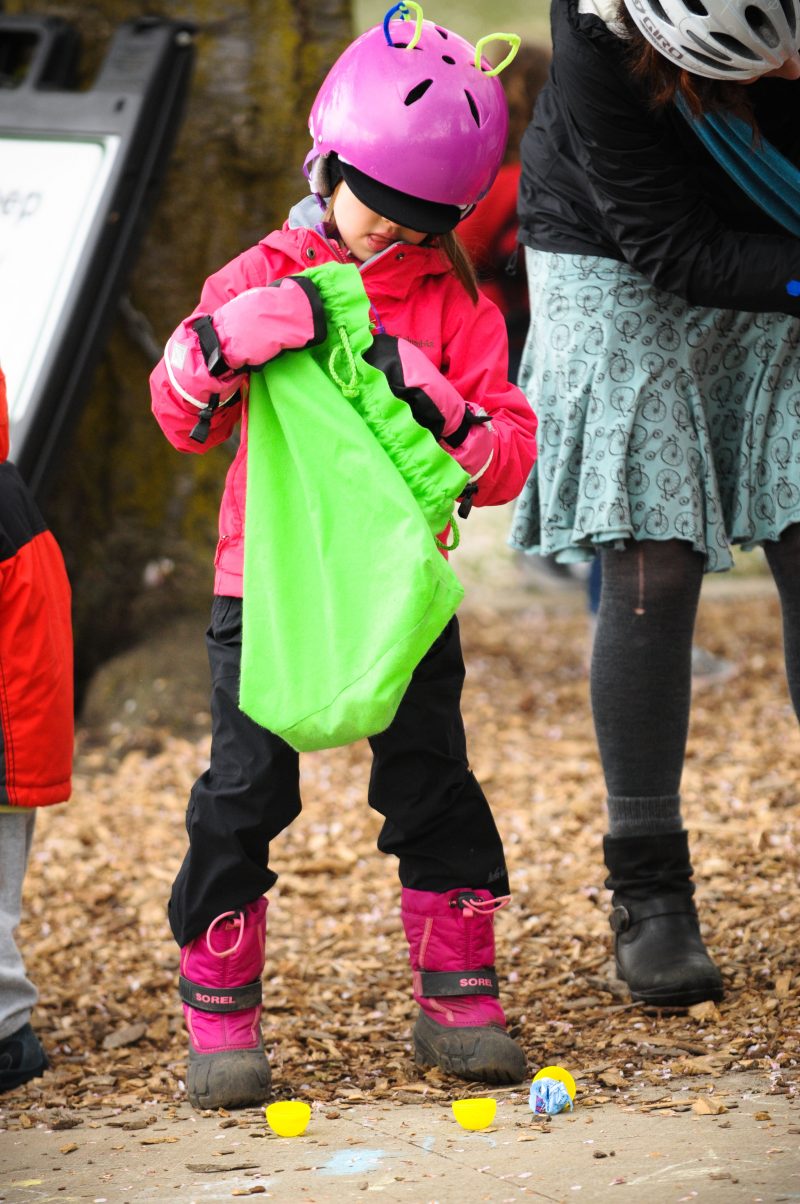 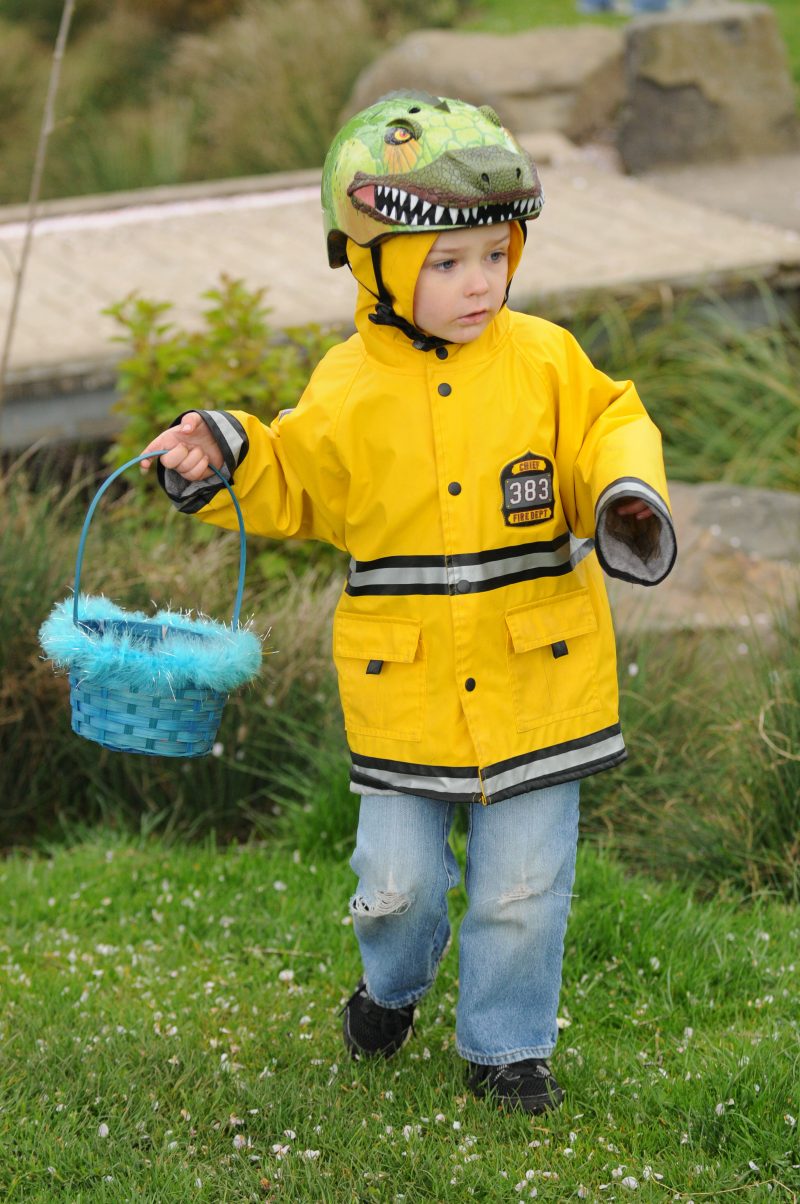 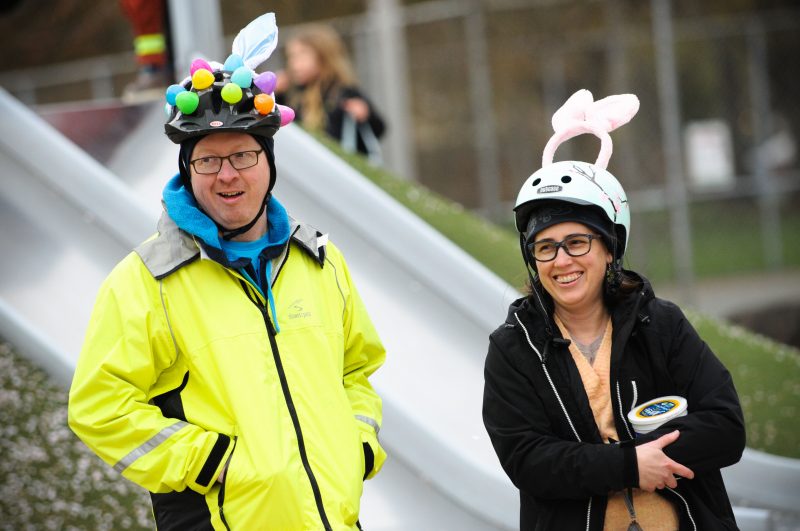 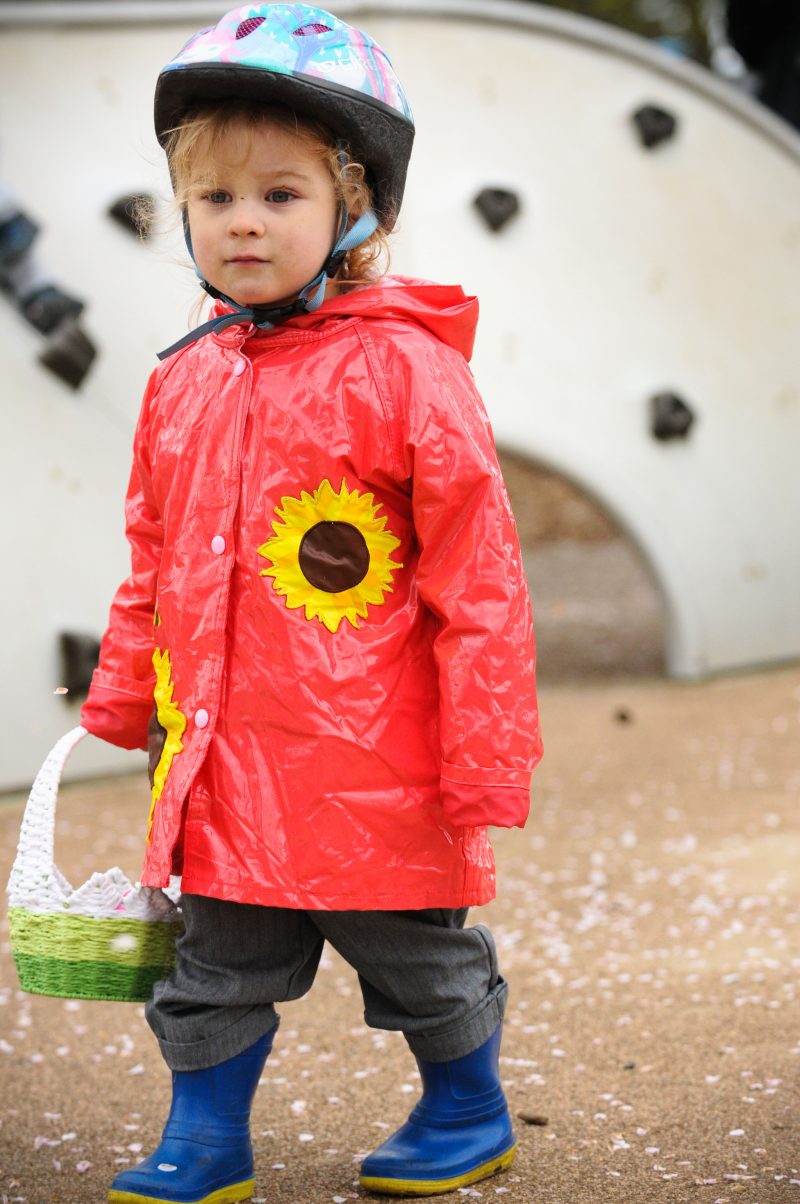 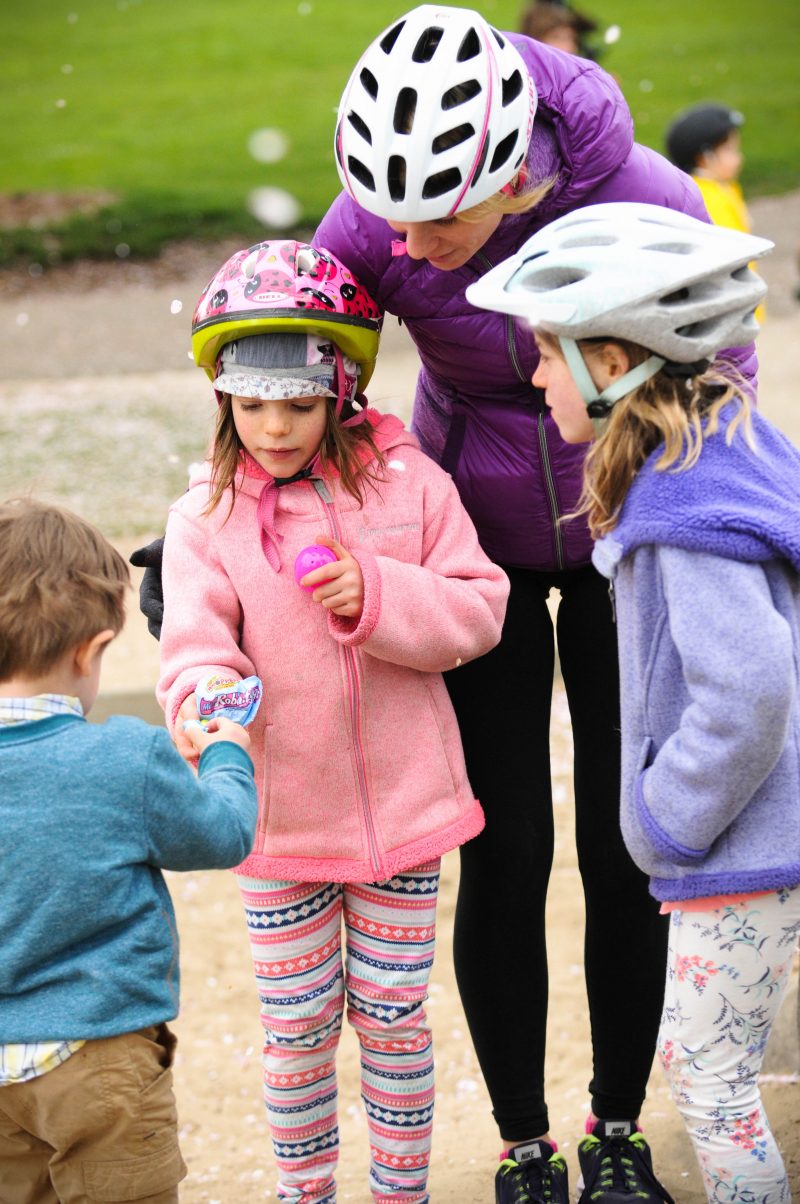 Huge thanks to Sara Davidson, Director of Kidical Mass PDX, for orchestrating the entire event including playing Easter Bunny and stuffing and hiding all the eggs. I had a blast leading the ride and can’t wait to ride again.

Well, that certainly had enough mass of kids to earn the moniker. Great photos of what looked like a grand outing.

Yay, I love that you got such a great turnout!

I love these photos!