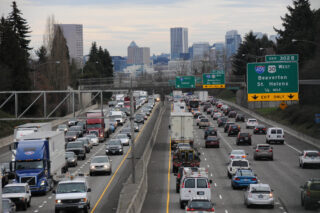 Freeway space is both a finite resource and one that comes with many negative externalities. It should cost much more to use.
(Photo: J. Maus/BikePortland)

For most other services, when demand soars, the price increases. But not with our freeways. Is it time for us to pay more for using our limited road resources?

The Oregon Department of Transportation has started a process that will help them decide if, when, where and how to implement congestion pricing — which they refer to as value pricing.

ODOT is acting on a directive from House Bill 2017 that passed the Oregon Legislature last year. It directs the Oregon Transportation Commission (OTC, the governor-appointed body that controls ODOT pursestrings) to seek approval from the Federal Highway Administration by December 2018 to implement pricing on I-5 and I-205. The bill specifically called out the sections of both freeways in the Portland metro region.

At this stage in the process, ODOT is conducting a “feasibility analysis” to determine the best location(s) to implement pricing and what the impact of doing so would be. Late last month they held three open houses around the region and since January 23rd they’ve had an online open house where anyone can learn more about the issue and share their experiences and feedback. That online open house is only open until this Monday, February 5th. If you haven’t checked it out yet, please try and make some time before it’s too late. 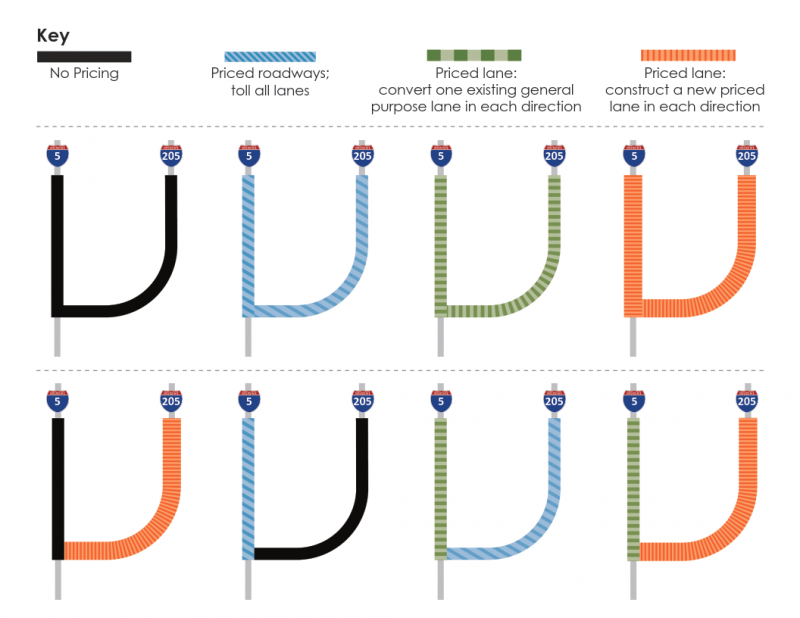 The online open house gives you the opportunity to share your experiences of how congestion has (or hasn’t) impacted you. You’ll also learn about the different methods of pricing under consideration and some of the criteria they’re using to assess the viability of different options.

One option currently under consideration is to use revenue raised through congestion pricing to finance “bottleneck relief projects.” Yes, you read that right, we would use pricing to help pay for more freeway lanes. That seems strange to us given the golden rule of induced demand and the high cost of building and maintaining freeways.

ODOT will share input gleaned from this online open house in their presentation to the OTC. The value pricing project team will also present this feedback at the Value Pricing Policy Advisory Committee meeting on February 28th.

This is neat. Instead of reducing how much they drive and helping to mitigate congestion for free, people can just click on a map and complain. And then they can complain about the cost of the new roads they want!

On the other hand you can also complain about the sorry state of bike lanes on ODOT controlled roads. It was cathartic after some of the more recent rides on their illustrious pavement.

Is there a way to find out which roads are ODOT-controlled?

Hi Dan… This GIS map has all the roads in Oregon and you can turn on a layer that will show you which agency has jurisdiction over which roads. http://gis.odot.state.or.us/transgis/

Good lord. The survey is SO terrible.

It’s entire underlying assumption is that driving will continue the way it does now. It just has no consideration for how to build a community that isn’t overwhelmed by cars. It is the epitome of an ODOT perspective. Really disappointing.

The survey was pretty terrible with the built-in assumptions.

This was still a good reminder to provide feedback. I let them know that I support them charging money for both highways and plowing that money into improving other modes of travel so people don’t feel forced into the car or truck. Build out the transit and bicycle infrastructure and you won’t need as much for the cars and trucks (inhabited by a single person).

This is one of those “be careful what you wish for” situations.

If congestion pricing is implemented, expect filtering as a side effect. Just as many people drive extra to save a few cents per gallon on gas, they’ll also try to dodge tolls, even those that make sense.

It’s unrealistic to imagine that interstate drivers represent a meaningful number of potential cyclists. Practically by definition, they travel further than most people and would have to deal with riding conditions that most people here would consider unacceptable or unridable outright.

I guess they can float their car over the river on some sort of raft?

If the idea is that there will be less driving just by tolling a few bridges, people are kidding themselves. They are also kidding themselves if they think a plan with zero motorist support has any chance of getting through. Anything of substance is going to need to make at least some sense to a lot of people.

BTW, y’all shouldn’t be cheering anything that slows traffic on the interstates as that builds incentives to take other streets.

Pricing schmricing. There will be no new lanes. Every dollar will be sucked up repairing and maintaining what’s already there. As Trump said, it’s up to state and local governments to pay for infrastructure. This translates into no new infrastructure.

Funny reading comments from people who want a fast commute at rush hour from Wilsonville to Vancouver, or Banks to NE Portland. Seriously. May as well start sinking money into teleportation.

[*I went to the Vancouver open house, the first hour was filled with I-5 MV commuters (Oregonians and Vancouverites) who DO NOT want to pay any fee for using I-5 even if its for improvements (capacity or congestion reduction). The last hour was more balanced – from what I was told by on-site planning staff.]

I’m having flashbacks to the uproar over a diverter at 50th and Lincoln… can’t image how much worse the feedback will be from drivers on this one.

Ask users for feedback => no progress. No one will want to pay to use what they’ve been using for ‘free’ up until now.

Here’s my idea. Let’s close all but a handful of the off-ramps within city limits. Leave open (for examples) I-5 at Jantzen Beach, I-5 at Macadam/Corbett and I-5 at Capital Highway/Barbur Blvd.

Feel free to leave the on-ramps as is, if you’d like. Perhaps add signage to the effect: “Abandon Hope All Ye Who Enter In.”

I long have puzzled what a modern version of Dante’s Inferno would be like.

One might enter on a great multi-lane freeway. Lanes gradually vanish. Partway along the head of OdoT (stand-in for Pope Boniface VIII) would appear. Then one lane DOWN. Finally, gigantic potholes and icy narrow ROWs…

Are we there yet?

I like some of the off-ramp comments above; could someone explain why tolling off-ramps would be a bad idea? What would happen if we tolled all off-ramps between exits 306 and 299? People passing through from Vancouver to Tualatin or beyond—those who are using the freeway for its “intended” purpose, could continue to do so without paying for the congestion caused by those who could use alternative routes or modes.

Of course, with any pricing scheme, what is going to happen if people actually do attempt to switch to, say, transit—and it isn’t available? Is there a plan to add buses or MAX runs from Delta Park to downtown?

El Biciclero
What would happen if we tolled all off-ramps between exits 306 and 299?

Southbound, people would exit at Marine Drive in droves and divert through the neighborhoods. That would be bad: more frantic people rushing through residential areas. Enough folks already do this on their way to Hillsboro, to make traffic in St. Johns miserable during the rush hours. I imagine it would be much worse if there were a financial incentive to exit before the tolls kick in. Frankly, the only way I think congestion pricing will work without such side effects is if it encourages people in personal vehicles to not cross the I-5 and I-205 bridges at the Columbia River.

Unfortunately, much of the dynamic goes back to housing. Comparable properties to those in Portland cost 25% (or so) less in Vancouver, but the greater number of jobs are in Portland. A similar dynamic has people commuting from East Portland to the west side for work.

OK, but what would happen if there were a sizable park-‘n’-ride at Delta Park/PIR (combined, of course, with more frequent and better bus/MAX service)? What would those who currently divert toward Hillsboro at Marine Drive do if the route from 5 to 26 was cost-free and suddenly less full (because those who were using the freeway to hop into Portland all exited at Delta Park to get on an express bus)?

Car pooling/van pooling seems the way to go. Every Portland employer should have some kind of service connecting employees to car pooling groups. Incentivize!

Vote Up0Vote Down
« Jobs of the Week: Velotech, Metropolis Cycle Repair, Ride with GPS
Comment of the Week: How to fix east Portland’s scary streets »