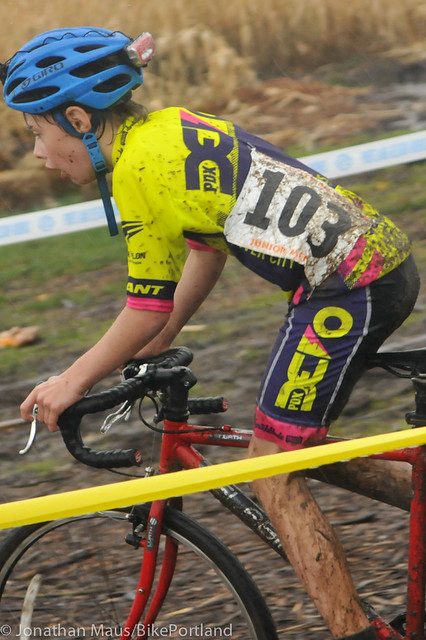 Here on BikePortland we often talk about removing barriers to bicycling. When it comes to racing, the barrier is often a finanical one as equipment costs and race entry fees can quickly make the sport inaccessible too all but the most well-heeled.

That’s why we were happy to see that the Portland Trophy Cup, a five race series that starts tonight at Portland International Raceway (just north of the Kenton neighborhood), is letting everyone 18 years and under race for free. For everyone else each race entry costs $18 a week. That might not seem like a big deal, but for some young racers it might be the difference between staying at home or showing up.


Trophy Cup organizer Clint Culpepper tells us it’s all about trying to get more juniors to the races. “We really haven’t had great junior turnout at the Trophy Cup races in the past,” he said. “I would chalk most of this up to demographics. We attract mostly folks that live in north and northeast Portland and while I think we’ll see a big bump here in the next few years, many junior racers are coming from the westside.” Portland’s other weekday cyclocross race series, Blind Date at the Dairy, which kicks off Wednesday, has had a solid junior turnout.

The free racing was made possible by Portland-based Inhabit Real Estate. The company’s owner Eric Hagstette is a racer himself and said he’s always looking for ways to support meaningful things in the community. “I’m psyched to sponsor the juniors,” he shared with us via email last week. “It is a prerequisite of mine that my sponsorship dollars go toward a meaningful purpose and not just for company exposure. I couldn’t think of a better way to help out.”

Culpepper says while some juniors are supported by parents, many rely on teams to subsidize the cost of race entry. With bikes and accessories that can easily add up to a few thousand dollars, Culpepper’s longer-term vision is to create an afterschool program for young people similar to the Community Cycling Center’s summer bike camps. “Instead of exploring the city by bike and learning about maintenance,” Culpepper explains, “we would focus on getting kids bikes and getting them to the races.”

Actually, we need more sports opportunities of many varieties for our youth. We can pay now to make them available, or pay later when our formerly young citizens are suffering from the maladies of old age at ever-younger ages. We’re already seeing what we used to call adult onset diabetes (type II) going through the roof for people in their teens and twenties, a stroke spike among people in their forties and early fifties and clogged arteries all around.

Brian
Reply to  one

one
Reply to  Brian

So Brian, if I lug my 3 year old out to PIR, there is a race for them? Where do you see that?
Hazel, you say that they have to be 9?
I still see nothing on the website.

Brian
Reply to  one

Juniors are defined by OBRA as: “Junior = Rider between the age of 9 and 18 on December 31st of the current year.”
These two series do not offer anything below the Junior class (not enough time, I assume); however, the Cross Crusade series has the following: “Kids up to age 9* are welcome to come try out cyclocross on a kid-friendly, closed course.” More info at: http://www.crosscrusade.com/kids-cross/

And also, the GPCM series has a kiddie cross section that your three year old would rock! Basically, kiddie cross, 0-8 year olds is always free and normally we have to pay for juniors, 9-18. PDX Trophy Cup and their sponsors have been generous enough to make all the racers under 18 free! So. Awesome!

Hazel
Reply to  one