This is the first attempt at new thing I’ll be doing on Fridays: A look back into the BikePortland archives to see where we’ve been and how we have — or haven’t — changed.

It’s no coincidence that this also happens to be the 12th birthday of BikePortland. On this date in 2005 I bought the domain name, plugged in a free WordPress theme, and never looked back.

Actually, I have looked back. A few times. Luckily I never gave in to the temptation to give up. It hasn’t been easy surviving this long. But I’m very glad to still be here. I love this job more than ever and I’m committed to making this thing a true success once and for all (I’ll save what I mean by “true success” for another day). I think being around so long (relatively-speaking, for a blogger) gives me a greater appreciation for the value of longevity both to me personally and to the community-at-large. There’s a history of this place and its relationship to cycling that lives inside my head and on these pages. I hold a lot of different threads and I relish every opportunity to weave them together and try to expand the scope of understanding and provide historical context for our current decisions.

Which brings me to the “Flashback Friday” idea.

With 21,700 Front Page stories published so far, the BikePortland archives are like a real-time account of biking in this city since April 2005 (which is when I started doing the “Bike Fun” blog on OregonLive.com and before I transferred all those posts to BikePortland.org). It’s probably safe to say that I care about these archives more than anyone else on earth. They’re full of past friends and acquaintances, heartache and hope, fun and frustration.

So let’s dive into this first edition. What were we talking about in July 2007?


Portland used to have a swagger about its biking future

“Some of the things that we want to do will come right up against policies that will – in one way or another – tell us we can’t do it.”
— Roger Geller, PBOT Bike Coordinator on July 5th, 2007

We had a PBOT commissioner named Sam Adams who wasn’t shy about making bikes a priority (Adams would go on to become Mayor, only to leave town after one term following a scandal that knee-capped his tenure). On July 5th 2007 we covered a roundtable hosted by Congressman Earl Blumenauer where Adams was bullish on Portland’s biking future.

PBOT was working on an update to the bike master plan and Adams talked a big game.

“I think that you’re going to see an adoption of our version of world-best practices,” he said. “Everything from separated bicycle paths to much more aggressive bicycle boulevards.” Adams said the bike plan update would give him and other local leaders, “an effective mandate” to increase bike infrastructure funding. “In 2-3 years,” he said confidently, “we are going to be doing things no one imagined we could do.”

But someone else in that room put a bit of a damper on that optimism. It was PBOT Bike Coordinator Roger Geller (who still holds the position today). He too talked about following the example of the Dutch and said Adams’ focus on biking meant PBOT could adopt a “no more crumbs approach.” But ever the realist, Geller warned, “There are federal standards barriers, regional funding barriers, and local barriers in terms of our policies. Some of the things that we want to do will come right up against policies that will – in one way or another – tell us we can’t do it.”

One thing we didn’t do 10 years ago and are still struggling to do today is make 82nd Avenue safe for humans. We highlighted Commissioner Adams’ efforts to make it better but offered this massive understatement: “The bad news is they have a large task ahead of them.”

Speaking of large tasks for us to tackle. One July 10th 2007 I reported that bike theft in Portland was on the rise and that it showed no signs of going away any time soon. Unfortunately that turned out to be true. Interestingly, 10 years later the Portland Police Bureau is just now starting to use the RFID technology we mentioned back then in their latest efforts to catch thieves. 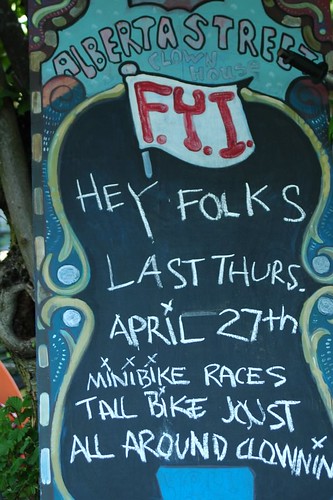 And guess what riders voted as the best bikeways in Portland 10 years ago? The couplet of North Vancouver and Williams avenues. That was based on a survey taken by Geller at a bike master plan update steering committee meeting.

While we worked on a new bike plan (it was eventually adopted in February 2009), we were still neophytes when it came to open streets events and bike share.

When I started to share news that PBOT was considering an open streets event for Portland, I shared comments and encouragement from a former parks commissioner of Bogota Colombia, the city that started the “ciclovia” movement and ultimately inspired us to launch Sunday Parkways one year later in June 2008.

And 10 years ago this week bike share was just a glint in Portland’s eye. Another bold bike idea from Commissioner Adams’ office. In a post titled, PDOT, Paris, and the potential for bike-sharing in Portland I was a bit skeptical in response to one of Adams’ policy staffers. My concern? “Would easy access to a bike,” I wrote, “make up for the fact that many Portlanders simply don’t feel safe on our downtown bike lanes and other routes?”

The final item in this week’s Flashback takes us to the Alberta neighborhood. It was before Last Thursday went carfree and it was the last time the colorful merrymakers that lived at the infamous Alberta Clown House would work their magic on appreciative crowds. And in case you’re wondering, Dingo the Clown is still going strong. He’s got a clowning partner named Olive and they’re a hot item at parties and events throughout the city.

I hope you enjoyed this trip down memory lane. Hopefully they broaden your perspective on issues and storylines we still follow today. Stay tuned for next week when I’ll share more nuggets from the past (and I promise the post will be shorter).

And thanks for reading — for all these years.

“And good luck getting the city, and Tri Met, and the Alberta business assoc. to agree on terms for a street closure. Especially once a month. Too many bull headed people means it will never happen.”
-Nostradabby

I still count getting Alberta carfree as one of the coolest bits of activism I’ve ever been involved with.

Remember… “Alberta has outgrown the sidewalk!”

rachel b
Reply to  Buzz

Buzz
Reply to  rachel b

Clown house may have been transitional Portland, but not new Portland.

rachel b
Reply to  Buzz

Re: the lint–I do! 😉 But who’s bragging? I’m sure your lint is JUST FANTASTIC.

Clown House did not die, it just moved to 1600 Pennsylvania Avenue

And has become a horror clown.

In 2-3 years,” he said confidently, “we are going to be doing things no one imagined we could do.”

He wasn’t wrong. Since then, we’ve slashed the budget for active transportation, delayed pretty much every major cycling/safety project, and slowed to a snails pace when it comes to getting diversion on greenways. I bet no one no one imagined we’d backslide on our bike-friendliness.

Maybe when every 1A school in Portland has heat and lead free pipes, we can work on your specific personal ideas for cycling infrastructure. Until that golden dawn arrives, I’ll keep riding my friggin bike past the burnt out RV on my street. New Portland.

you funny.
I don’t see why we couldn’t have both – and in six months time!

We just need to stop studying highway bridge boondoggles ($200M for CRC-that-never-happened; $8M for Salem’s version (3rd Bridge) that won’t be built either. Never mind the hundreds of millions in cost overruns on ODOT’s highway straightening projects). And the military and subsidies to the healthcare industry. See I just knocked loose a couple billion we (could have) left over to fix the pipes and put in world class non-car infrastructure. Wasn’t even hard. 😉

Yep. Portland could even slash the “public safety” funding (i.e. police) to pay for things that actually improve safety — like bike infrastructure, clean water, and homeless shelters. But that would require that PPB give up their toys.

Oh, you mean like an extra $2million the PPB wanted to spend on live ammunition for target practice?
http://koin.com/2017/07/14/ppb-wants-to-re-allocate-budget-cash-for-more-ammo/

Cops should be required to buy and reload their own ammo. Might even cut down on cop caused murders.

Right. Well Big Knobbies kind of has that covered here in the comments, eh?

When did you arrive in Portland Adam?

“It’s probably safe to say that I care about these archives more than anyone else on earth.”

I’m sure you’re right, Jonathan, but I’m right behind you.
I think this is a great idea. Always good to take time to reflect, take stock.

Thanks for all the time and effort you put in to informing, urging, and inspiring the bicycling population of Portland.

I’d be a supporter and give you money if I could figure out the web interface for the “become a supporter” option.

Talk to me ted. How can I help make that easier?

In so many ways, our city… our county… indeed, the world, is worse now.
What I wouldn’t give to go back and change its course. 🙁

“the world is worse now”

Yeah, kids today. I think people have been saying this for about 3,000 years. Problem is, only the older generation knows how much better it was back in the day. The new folks only know how it is now, and they don’t think it’s all that bad, what with smart phones and social media and instant everything—what’s not to love? I think as more and more people migrate to made-up (drama-based) and virtual worlds, the real world will continue to suffer and degrade.

rachel b
Reply to  El Biciclero

Steve Cutts captures the joy of smartphones! And the Modern Day!

LOL and what generation created this world?

My dad liked to frequently proclaim how much better life was (for him) in the 1950s.

In a few years I will be complaining about kids on my lawn and how I long for my golden years of cardigan sweaters and tight-rolling my jeans.

Great article! I moved to Portland in August, 2013 and that was another transitional period as well.

It’s great to reflect. 10 years go, there was so much optimism in Portland being a trendsetter in cycling infrastructure.

Fast forward 10 years and I predict in 5 years Portland will be gridlocked 24/7 on the freeways and surface streets. City officials and ODOT know this and won’t make any real improvements to cycling infrastructure.

Sounds like we should all be investing in Trials Bikes and training so we can ride over the tops of the gridlocked cars like Danny MacAskill. Luckily cars are not dangerous if they are not moving.

Thanks Jonathan…for the blast to the PDX bike past…a wistful tear fell in my cup of coffee thinking back about the Clown House and their bike street parades during Pedal Palooza/ Art Walks…the last year of the Clown House can be seen on Google Streetview (using the Wayback feature to 2007). http://www.portlandmercury.com/news/so-long-clowns/Content?oid=359552

PS. the Clown House address was ~ 2421 NE Alberta, Portland OR…amazingly it has not been bulldozed yet …

Based on the current rate of “progress” we will achieve PBOT’s new (40%-lower) bicycle mode share goal by 2080!