Penalosa is now the executive director of Walk and Bike For Life, an Ontario, Canada-based non-profit that promotes walking and biking as recreational activities and transportation options.

He sent me an email with thoughts about a ciclovia in Portland: 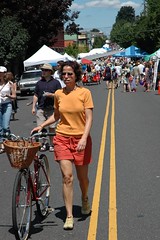 “I’m excited about the news that Portland is contemplating doing a ciclovia, even if initially it is for one day; if it is successful (and I am sure it will be) then it can be done all year round. Although (Portland) has a long way to go when compared to Copenhagen or Amsterdam, nevertheless it is a best practice to use as example to show many North American cities what can be done if there is the will and community engagement…

Many North American cities are contemplating the idea and Portland’s example would be most helpful.”

Penalosa says that any city has the basic ingredients for a ciclovia program:

“I find that the ciclovia is a program that can be done successfully anywhere, in a city of 7m like Bogota or a town of 50,000, in Latin America, North America, Europe, Asia… it does not require capital investments as the infrastructure is there, the roads. It does need operational budget and political will (guts!).”

He says community interaction is one of the main benefits of ciclovias: 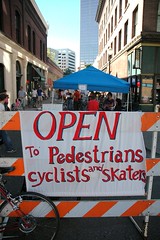 “It (the ciclovia) is the best that Colombia has to offer: young and old, rich and poor, men and women, novice and experts, tall and short, all! Most people bike, but others run, walk, skate, do aerobics… and in the end, it is about enjoying the presence of each other. Humans enjoy been with other humans, which is why we go to concerts when the sound would be better on an iPod, or we go into restaurants if there are others inside.”

Penalosa also stressed that ciclovias are a highly cost-effective way to provide recreation to large numbers of people:

“The other day I was riding with the Mayor (of Guadalajara, Mexico during their ciclovia event), and I asked him if he could even imagine how many soccer fields or gymnasiums or other sport facilities he would need to build and maintain to provide recreation to 145,000 residents every week, people of both genders, all ages, abilities and backgrounds (social, economic, ethnic, etc). Even if you have only 5,000 participants as in El Paso, you could not provide free recreation to so many.”

I hope someday soon Portland is known for being a leader in the American ciclovia movement. As Penalosa mentions, it will take political and administrative moxie, but since when has anything great ever come easy?

I would like PDOT to consider the ciclovia street to be one with numerous retail businesses on it, to show the positive economic impact of having less cars. I know that this would be politically difficult,especially concerning parking, but if Berkeley, CA and other towns can regularly close streets and make gobs of money and successfully deal with parking issues, then many of the naysayers will be stumped to find another argument against increased bike/ped access overall.

having witnessed ciclovia first-hand in bogota, i am excited to imagine a mini-version existing here in portland. it was great to see the mixture of different people out enjoying bike rides.

You\’ll get to see some amazing Ciclovia footage on StreetFilms in a few months. Mid-Sept we will be travelling there and it looks good that Gil Penalosa will be joining us.

I am so excited to bring video back to the U.S.!

I live in Guadalajara, Mexico and the city adopted Bogata\’s ciclovia idea a couple years ago (called Via Recreactiva here) and now every Saturday about 10,000 residents ride, skate, run and walk down over 21 km of non-car roads. One newspaper even started loaning bicycles for free (the bikes have an advertisement for the paper on them). The neighboring city of Zapopan recently added a few kilometers and both cities sponsor health and wellness events along the closed down roads. This is an idea that Portland should adopt!

Well the Burnside bridge will (sometime) be closed to traffic. That would be a perfect time for car-free Burnside.

Imagine all the people
Using roads in peace, you hoo
You may say I\’m a dreamer…..

I’m a cycling activist in Bogotá, Colombia, and have a bike rental and tour company here Bogota Bike Tours. Unfortunately, recent mayors have not backed the Ciclovia, and parts of it have been chipped away or even lopped off. Now, we are fighting plans to close its Seventh Ave. corridor for the construction of an express bus line. We support the bus line, but want the Ciclovia to continue, as well.