Man remains hospitalized after collision at Cully and Killingsworth 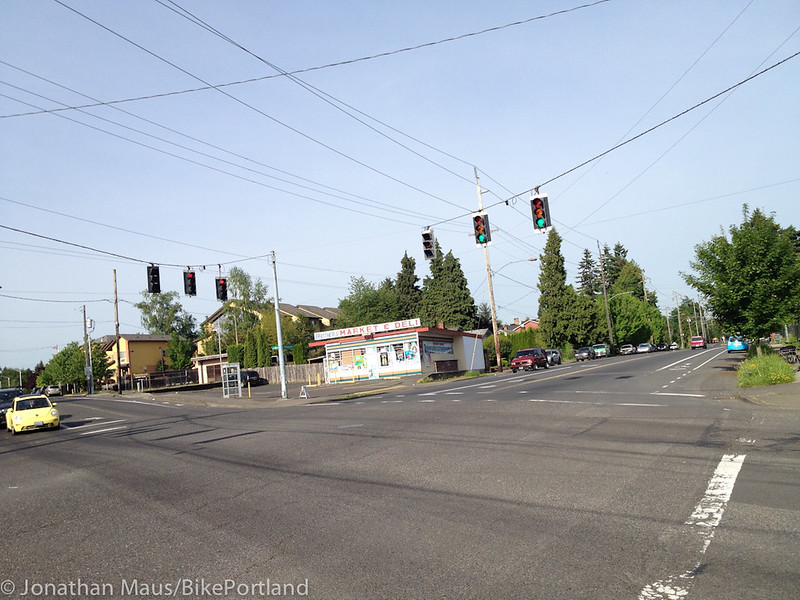 
This collision is just the latest in a spate of traffic crashes in the past week — including five fatalities.

Canche-Mukel was biking northbound on Northeast Cully Boulevard and was in the intersection of Killingsworth (map) when he and 34-year-old Ramon Benton collided. Benton was driving a 2004 Honda Accord eastbound on Killingsworth prior to the collision. Police say Benton stayed at the scene and, “did not display any signs of impairment or distracted driving.”

Information released by the Portland Police Bureau (PPB) so far does not say who had the right-of-way or whether or not Benton was traveling over the 35 mph speed limit.

As per usual in these situations, no citations have been issued because the crash is still under investigation. Once the Mutlnomah County District Attorney’s office has reviewed the case, the PPB will re-examine the circumstances before handing out any citations.

This intersection is no stranger to collisions. Three years ago Ryan Egge died from injuries he sustained after being struck by an auto user while crossing here. 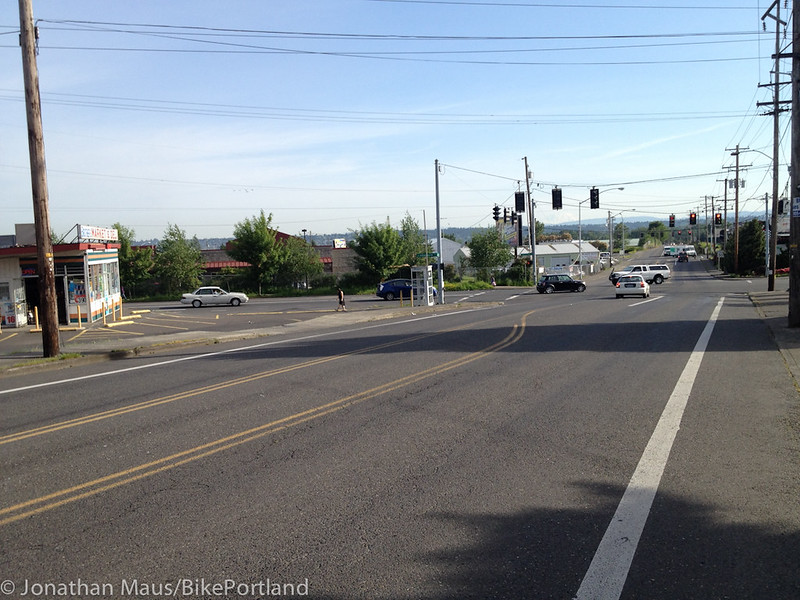 The view northbound on Cully just before Killingsworth.

The Portland Bureau of Transportation says this section of Killingsworth is part of its High Crash Network. Speed limits on both streets are 35 mph and the cross-section is multi-lane and relatively wide. By 2018 PBOT plans to build more sidewalks and add buffered bike lanes on Killingsworth east of the Cully intersection.

According to PBOT’s Vision Zero Crash Map, four motor vehicle users were seriously injured at this intersection between 2005 and 2014 (in addition to the Egge fatality).

This latest collision is just the latest in a spate of traffic crashes in the past week — including five fatalities. Here’s a rundown of PPB headlines between June 27th and July 4th:

Portland has made a valiant Vision Zero effort. But it’s clear not enough is being done. It will take a much more aggressive mix of policies, programs, and projects if we ever hope to get there.

“Portland has made a valiant Vision Zero effort.”

Zero Vision has proven to be nothing more than window dressing. A task force, a logo, and annual reports.

Hi Paul… I didn’t post about it yet but City Council just passed a budget with over $1.4 million specifically set aside for Vision Zero. That’s not a ton of money; but it’s significant. PBOT has done a lot of work on Vision Zero… groundwork that’s essential before money starts flowing. Check the BP archives for how much they’ve done on the VZ effort.

That $1.4 million will be well-spent on graphic design and consultants.

I hear you Todd (and others).

Don’t get me wrong. We clearly need PBOT to do more — much more — to move the needle on street safety. But to mock their efforts and say they’ve done nothing and/or aren’t taking VZ seriously isn’t accurate IMO. And remember, PBOT takes orders from City Council and City Council takes orders from lobbyists, advocates, and Portland voters.

When PBOT stops removing bicycle lanes in construction zones without appropriate signage for projects branded as Vision Zero I’ll start believing they might be serious. Until then I could use some paint on Beaverton-Hillsdale Hwy between SW 21st Ave and 25th Ave.

The crews doing the work are very different than the leaders of the department and while one group is talking a good game, the actions are what we see and have an impact on our lives.

The new 102nd configuration doesn’t really exude VZ. They just put down paint and no separation at all. And now those lanes are full of broken glass.

Jonathan, I recognize that this is a step in the right direction (whether that amount constitutes “valiant” is another matter), but while my comment was short and pithy there are a couple things I’m specifically thinking about the city’s effort that make it fall well short — laughably so — of that descriptor.

The first, and lesser of the two, is that the assertion was that the city has made (past tense) such an effort; any budget just passed doesn’t get to count towards that. I’m not convinced the city’s effort to date is so significant, as the largest actual system changes are those that follow a death (e.g., the revamp of Powell & SE 26th after Alistair, or the Hawthorne turn lane after Fallon). I see nice words, but I also see “Be Seen, Be Safe.” While there has certainly been work done it’s hard to see it as “valiant” when it caves to auto throughput more often than not until there’s blood on the pavement.

More importantly though, Vision Zero can’t be a separate effort within the department. It has to be part of literally every project team, every priority meeting, and every decision, or it’s not really aiming for zero. As long as it has a separate budget it’s still the outside effort. This is not how Vision Zero works.

I’d agree with “the city’s Vision Zero effort is growing” if you want a positive spin, but the impact to date has not moved the needle much. Hence this story you were kind enough to write on the topic of a number tragically greater than zero.

We can fix this statement. “Portland has made a valiant effort marketing Vision Zero and including this initiative in many of its projects, press releases, and e-mail signatures.”

That Biden quote doesn’t even fully encapsulate this because a lot of what PBOT is doing now under the banner of Vision Zero was happening anyway. Paving projects can be cited for their safety benefits by moving lanes (paint) around, curb cuts improving accessibility work within the framework by making it safer to get into and out of the roadway.

It’s tragic that we treat serious injuries and deaths inflicted by motor vehicle usage in a completely different, practically unavoidable, manner than those that happen by any other means.

“It will take a much more aggressive mix of policies, programs, and projects if we ever hope to get there.”

Yep. Let’s hope we have friends in the right places, and they’re working on this full steam, and most of all that they communicate to us and the world about their progress and can confirm that the city is living up to the priority it assigned this goal.

“It will take a much more aggressive mix of policies, programs, and projects if we ever hope to get there.”

Yep.
And let’s hope we have friends in the right places, and they’re working on this full steam, and most of all that they communicate to us and the world about their progress and can confirm that the city is living up to the priority it assigned this goal.

Not every intersection in Portland has enough room for a Dutch-style protected intersection, but that one does.

That intersection is pretty fast when it is East/West.

Anecdotally, I feel the light sensors at this intersection make the sequences too short so some people blast there there to make the green light, squeak through that yellow, or skirt the red.

Infrastructure is only one tool to fix a problem intersection while other tools not only lack the financial backing they will lack the support of those in the area.

I speak about this intersection because I ride and drive through it quite regularly and have witness questionable driving behavior AND questionable pedestrian behavior.

I don’t know all the facts about this story. I can’t assume anything about either party being at fault. But I can say that this intersection has some subconscious design faults that lead to dark patterns of behavior that lead to tragedies of this sort.

All I can do with this comment is give riders the heads up to ride defensively in this intersection and to give drivers (some of us are both) the heads up that cyclists and pedestrians frequent the streets and are vulnerable to our actions.

“You can do everything right and still lose.”

“did not display any signs of impairment or distracted driving.”

I understand how you can check for signs of impairment, but how do you check for signs of previous distraction after the collision is already over? Don’t you need to at least check the phone records first before making that conclusion? Or were there witnesses who clearly saw the driver immediately before the collision (unlikely)? Its not clear why distraction is being ruled out.

Don’t forget this is a lower income area. If you start targeting it for enforcement you are just kicking a hornet’s nest. Take your pick…safer roads, or political correctness.

Are you saying that the collision should not be investigated because it occured in a low income area? Doesn’t the victim deserve a proper investigation regardless of where the collision occured?

It was late at night and someone ran the red light . . . just a guess.

I drive and ride that area often. It isn’t actually that much different than anywhere else in the city, where users push the envelope of opportunity to make it through the light, knowing it won’t be them that gets a ticket. The laws of physics and luck are the only governing forces to road users now. We used to have have courtesy and respect 10 yrs ago, and maybe even enforcement. Mostly evaporated. As part of V-Zero, road users need major education efforts and definite enforcement more than the low-hanging fruit of paint on the road.