Guest post: Families show up in Salem to demand more funding for Safe Routes to School 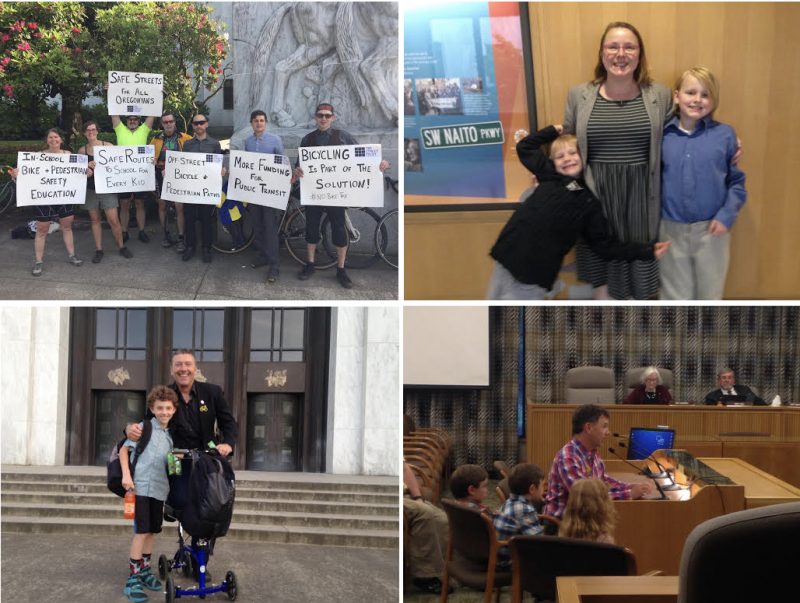 Participants in the Ride to Salem pose with signs outside the capitol (top, left), while children and their parents from Eugene, Portland and Milwaukie testified. (Photos: The Street Trust)


“My name is Shane MacRhodes, this is my daughter Isadora, who is 8 years old, and my sons Gus and Ben who will be 7 in two weeks. We’re from Eugene and we’re here to ask for a better Transportation Bill 2017 that includes Safe Routes to School funding.” Shane wrote about their experience in a post on the Eugene Safe Routes to School website.

Oliver and his father Robert Ping also testified. “I’ve almost been hit by a car biking to school,” Oliver explained. He wants to make streets safe for all kids to be able to walk and bike.

Trey testified and delivered 1,000 postcards from families across Oregon who have joined the For Every Kid Coalition in support of expanding Safe Routes to School to every kid in Oregon. Trey has been testifying locally in the Portland Metro area for five years to try to make the streets around his school in Milwaukie safe. He is now 10 years old, and as of now, he has not seen any safety improvements. Last night he took his message to the State Capitol.

“I live just over a quarter mile from school and I can’t safely walk and bike there,” Trey said. “We need you to support the priorities of House Bill 3230 [a bill The Street Trust wants integrated into the Transportation Package (House Bill 2017-3)]. You can have a big impact, and that’s why we are all here, right?”

These kids made their way to Salem after a whirlwind call to action by the For Every Kid Coalition in the short window between when HB 2017 became public last week and this week’s public hearings. Safe Routes to School is named in the package, but it is not adequate. Oregon kids showed up this week to demand better. 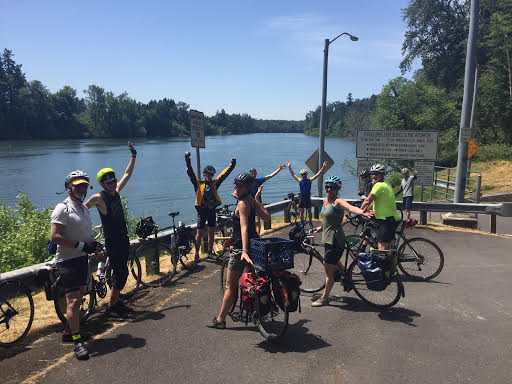 While families were getting kids home from school and off to the Capitol on Tuesday, a group of Portland Metro residents biked the last several miles of The Street Trust’s #RideToSalem to speak out for a balanced Transportation Package that prioritizes walking, biking, transit, and Safe Routes to School and share concerns about the proposed bicycle sales tax.

Advocates young and young at heart from Bend to Eugene to Milwaukie are lining up to help Senators and Representatives make our needed Transportation Package the best it can be for kids, seniors, and all people who walk, bike, and use transit (and occasionally drive!).

Join us and these amazing youth in telling legislators what you want to see (and don’t want to see) in the transportation funding package. Tonight is the last scheduled work session on the bill of the Joint Committee on Transportation Preservation and Modernization, so today is the final day to contact your legislators. You can email the committee directly via jtpm.exhibits@oregonlegislature.gov.

This is great for these kids and I’m glad we’re getting people interested in advocacy at a young age. Unfortunately the state is only willing to do so much to be able to say that they are bike-friendly without actually doing what it actually takes to make the streets truly safe. It’s a charade. Bicycles aren’t big business in the way that the oil companies are, so until the collapse of the oil economy, our elected officials will continue to prioritize money over safety. (Though I think this problem doesn’t go away and will just morph into a battery lobby). If the state really cared about safety as they claim they do, they wouldn’t be spending fifty times the amount allocated for Safe Routes on “fixing” the Rose Quarter where no one has died.

3 cheers for these kids, in addition to lobbying for routes to school they should join in with the Childrens Lawsuit against Climate Change. https://www.ourchildrenstrust.org/us/federal-lawsuit/
That way they can have a planet to live on after they get out of school. Sometimes I think we would be better off if we had both state and federal legislative bodies made up of nothing but young people.

Kids riding their bikes to school safely is a really important thing, and every kid should be able to do that, but my kids are selling their home and moving out of state, because their daughter can’t walk 6 blocks to school, without some homeless person yelling and cussing at her and her friends, and even in some cases, exposing themselves, throwing objects, and even human feces at them. More bicycle and street safety is important, but when kids can’t even walk to school on their own neighborhood streets, or even be safe in their own front yards, not because of traffic safety, but because their neighborhoods have homeless people that are mentally ill, and are drug users, and dealers, parking broken down RV’s on their streets, and living in then, and in vacant lots, and even in neighborhood parks across the street from grade schools, and middle schools – that is as big, if not a bigger problem for the safety of our children! I realize that being a bicycle safe and friendly city, is a big, media, PR, hype for Oregon, but I think Portland has some bigger neighborhood safety issues to deal with!

This is not a “neighborhood safety” issue IMO, it’s an issue with how we’ve treated mental illness since the Reagan era. We should be helping these people, not forcing them out into the street. I totally don’t blame your kids – no one should be put into a position where they are harassed while walking to school – but at the same time people with mental illnesses also deserve proper treatment.