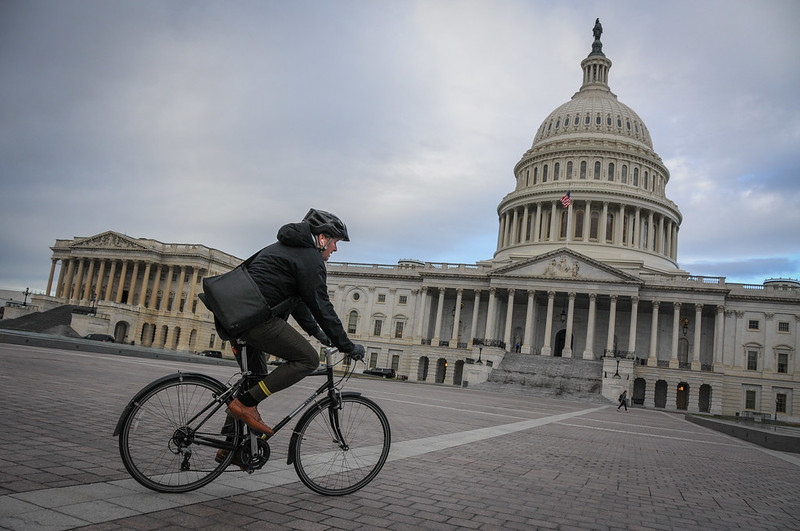 Bikes — and the people who love them — are making their presence felt on Capitol Hill today.
(Photo: J. Maus/BikePortland)

Hundreds of advocates are on Capitol Hill in Washington D.C. today to remind members of Congress that bicycling — and transportation reform in general — is a high priority for the American people.

Lobby day is one of the most important elements of the League of American Bicyclists’ National Bike Summit. It’s a time for advocates to make a personal connection with their elected representatives, share stories about why bicycling matters, and make specific “asks” for bills and policies to support.

“No one knows what to expect or what’s going to come up.”
— Caron Whitaker, League of American Bicyclists federal policy director

The League works with coordinators from each state to create a game plan and a schedule of meetings in the House and Senate office buildings. Typically the focus is on building support for parts of the transportation bill — but with so few details known about Trump’s infrastructure plans, this year is a bit different.

League Federal Policy Director Caron Whitaker shared last night that the defining word around transportation on the Hill right now is “uncertainty.” “No one knows what to expect or what’s going to come up,” she said. “That’s uncomfortable.”

In this context, the official “asks” we’re making of Senators and House Reps are simple: Will you support biking and walking investments in any transportation package that gets introduced? And on the House side, the ask is to support the Vision Zero bill introduced last week by Reps. Earl Blumenauer and Vern Buchanan.

To help make the case, the Oregon delegation has folders for each meeting with leave-behinds. This year we’re highlighting two major trail projects — the Historic Columbia River Highway State Trail and the Oregon Timber Trail.

To supplement our case for bicycling on a national level, the League has provided compelling data and charts. The one below will likely be very influential. It shows that biking and walking projects (like paths, sidewalks, and greenways) create more jobs per million dollars spent than other types of infrastructure:

I’ll be tagging along with Oregon advocates all day. Stay tuned for a full report.

But I wonder: for how long do these jobs last? I think that job-months would be more important than just a raw number of jobs, especially for the people whose livelihood depends on such jobs.

Can’t help but wonder that during our current political mess does congress really give a rip. Good luck with that one

Someone posted that chart on the Rails to Trails Conservancy Facebook page earlier this week. Building trails create jobs. So does maintaining them. Add to that the food stops, hotels, rest areas, grocery stores, and other facilities built to serve Trail users. Plus trails take up less space than a 6 or 8 lane freeway – and they create no pollution! Trump’s been taking about railroads and freeways in order to move freight, but not one word about trails or ped/bike projects or improvements. And not much about public transit at all. Improving rails for freight – okay. But we can build trails, too. The talk being revived lately about a west side freeway bypass raises a question: do we build a freeway, a bike path network, or both? Or is Trump trying to push us into making mistakes we avoided 30 years ago?

Chris I
Reply to  Mike Sanders

A huge chunk of America doesn’t recreate, at all. Another huge chunk doesn’t recreate on trails because they prefer gas-powered toys. The ultra-wealthy typically don’t use trails either. Do we really think that anyone currently in power at the national level cares about trails at all?

Smokey Bear
Reply to  Chris I

I like to think there’s good reason to be optimistic, rather than pessimistic about potential for increasing interest in bike recreational trail in Oregon and in our part of the Willamette Valley. Coast range timberland just outside of Forest Grove and much of the way west to the coast, could be the new frontier for off-road biking.

People already ride there now, but many more might be able to, if some deals were made. If recreational biking on those lands could be a tourist draw, that could be tourist dollars that timber counties desperately need to help replace revenue that timber harvest used to be able to be relied upon for revenue.

Compared to construction of some other types of recreational facilities, I’m guessing that construction of off-road bike trail, can be very low cost. Some people of course, really think power equipment is essential for this type construction, but it can be, and has been done without. Trails are as old as time.

Less mentioned about the sitting president, the better, is how I’m feeling more and more. I try to just follow enough to keep up with the latest on what he’s doing, but the guy is so far below my most modest expectations of character in a president, that I think it’s very difficult to expect much in the way of integrity of values and ideals from this person. Work-a-rounds may be the only way to sustain and increase the range of good things Oregon has to offer people that live here, and those that come to visit.

I think Trump just wants to improve our infrastructure in general. Make roads/bridges/airports better – hopefully safer. I’m sure local governments will have their snouts in the trough for bike projects, trails, etc.

I’d be happy to have a freeway bypass around Portland if it would alleviate some congestion – I think everyone who uses the freeways would agree. We need another huge circle around the entire mess.

I’d focus first on safety improvements to beef up roads, rails, buildings, and bridges to reduce damage from earthquakes and other likely catastrophic events.

You have freeway bypasses around either side of Portland, and they’ve both been parking lots for as long as I can remember. No amount of road repair is going to change that, regardless of what taxpayers throw at it.

Job months is a good thought for a metric….plus if the infrastructure being built could be more manual and entry level (skills building) vs mechanized…thus a gateway to training and higher income over time for the un/under employed.

This is where the construction of “greenways, sidewalks and bikeways”…especially sidewalks for ADA could be more achievable and possibly the next WPA for the Trump voters…something I had hoped Obama’s shovel ready efforts were to have accomplished [but then again Congress was not too helpful on making a new WPA back then].

It is so laughable that anyone thinks the orange man in charge has an infrastructure plan.
Unless he sees something about roads or something on Fox news while stumbling around in his bathrobe at 3 am, it will not occur to him again…..

Trump’s infrastructure plan is all but dead before it got started, according to today’s news. No plan, no money, no staff, no interest (except on the local level). Did I say no money?

Let it collapse, then see what rises out of the ashes. What the hell. It will impact vehicle drivers the hardest and cost them the most. Isn’t that what we want?

So you’ll be OK if failing infrastructure harms a friend or family member while driving?

Throwing money at infrastructure under the guise of mitigating the problems of growth, all while encouraging growth, has been the norm for all of my life.

Yes, it still drops ceiling tiles which kill people to this day, and no, traffic is no better now than when I lived there decades ago. On the flip side, having space for people above it is a win.

He’s depending on local governments to let the feds know what they need most – I think our local bisaxual gubnuh (if you can insult the president, I can insult the gubnuh) has sent a list of projects for Oregon.

You think that being bisexual is an insult?
Maybe you should just go back to your old Tr*mp handle.
I have always thought that the worst thing about Tr*mp is supporters like yourself….

Doesn’t matter to me – I’m bisacksual.