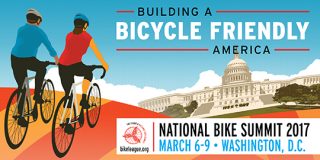 Welcome to our coverage archive of the 2017 National Bike Summit. Scroll down and click the headline for the full story.

Joel Maus didn’t know anyone when he came to the Summit. Now he’s got people.
(Photos: J. Maus/BikePortland)

For a movement to succeed there must be an advocacy infrastructure in place that newcomers can plug into; something that anyone with a passion and an idea can hitch themselves to and get pulled along until they become strong enough to roll on their own.

For the bicycle movement, that infrastructure has been built over the last century by the League of American Bicyclists. Since 2000, their annual National Bike Summit has introduced hundreds (thousands?) of newbies to the wonderful world of bike advocacy.

This year Joel Maus was one of them.
END_OF_DOCUMENT_TOKEN_TO_BE_REPLACED

Bikes — and the people who love them — are making their presence felt on Capitol Hill today.
(Photo: J. Maus/BikePortland)

Hundreds of advocates are on Capitol Hill in Washington D.C. today to remind members of Congress that bicycling — and transportation reform in general — is a high priority for the American people.

Lobby day is one of the most important elements of the League of American Bicyclists’ National Bike Summit. It’s a time for advocates to make a personal connection with their elected representatives, share stories about why bicycling matters, and make specific “asks” for bills and policies to support.
END_OF_DOCUMENT_TOKEN_TO_BE_REPLACED

A ‘bicycle-friendly driver’ class changes hearts and minds in Colorado

A lot of energy gets used up on safety education in the bike advocacy world. And most of it is focused on the wrong people.

After two bicycle riders died in the “Platinum” level bicycle-friendly city Fort Collins, Colorado in 2015, the main bike advocacy group held a town hall. Because both victims were riding legally and safety when hit, many people asked, “What are we doing to educate people who drive?”

That outcry led to a lightbulb moment for Jamie Gaskill-Fox, the woman who runs the Bicycle Ambassador program at the City of Fort Collins. The city was already teaching a bike safety class, but it wasn’t well attended. After that meeting, Gaskill-Fox and her colleague Scott Sampl decided to re-brand the class.

They called it the Bicycle Friendly Driver class. The number of people took the class tripled in just one year. END_OF_DOCUMENT_TOKEN_TO_BE_REPLACED

A look at how D.C. is building protected bikeways

DC has started carving up their downtown streets so that bicycle users get a larger portion.
(Photos: J. Maus/BikePortland)

If it can happen in D.C., can it happen in Portland?
END_OF_DOCUMENT_TOKEN_TO_BE_REPLACED

Blumenauer urges advocates to use cycling as tool to save America

People who voted for Donald Trump in America’s rust belt (and other places) need to hear more about the role bicycles and cycling can play in the future of our country. And people who didn’t vote for Trump should see bike advocacy as a place to put their newfound energy for activism.

Those are two takeaways from a speech by Congressman Earl Blumenauer this morning at the 17th annual National Bike Summit this morning.

Blumenauer spoke about the “unprecedented levels of activism” seen in cities across America in January in response to Trump’s inauguration.

“Cycling,” he said, “Can be part of that menu where we try and give people something they can sink their teeth into. Something they can wrap their arms around that will make a difference in their community and will help shape and inform federal policy.” END_OF_DOCUMENT_TOKEN_TO_BE_REPLACED

National Bike Summit: The health of the bike movement — and its future under Trump

Sunny — but with a few dark clouds.
(Photo: J. Maus/BikePortland)

Day one of the 2017 National Bike Summit is in the books. After a two-year hiatus, we decided to head back to D.C.

I was motivated to make the journey for several reasons. With the Trump era in full-swing, it seems like showing up for bikes in the nation’s capitol is more important than ever. Relatedly, I wanted to check the pulse of the national movement: If we do receive a major attack, will we be healthy enough to fend it off? Is it even possible to have a “we” anymore?
END_OF_DOCUMENT_TOKEN_TO_BE_REPLACED

Once in a Blue Moon Halloween Bike Ride