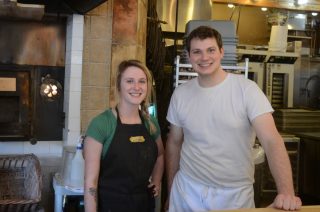 Every July for 10 years now, northwest Portlanders who love the Tour de France have gathered at 6 in the morning for a slice of international cycling, available for free … at a local bakery.

Why a bakery? Because the annual bike race makes its 40-something owner, Dominique Geulin, feel at home.

“He grew up with the Tour going through his town,” said Seanna Sample, Geulin’s niece and a supervisor at St. Honore Boulangerie at NW 23rd and Thurman. “When it’s on TV he sees his family and friends standing by the road.”


Geulin started dreaming of owning a traditional bakery after immigrated to the United States in his 20s. After years in the food industry, he launched St. Honore in 2003 and set about looking for ways to get the message out that this wasn’t just any bakery — it was a French bakery.

“He used to bring in his own TV from his house and hook it up,” Sample recalled.

Today, the TV is a flat-screen near the oven that spends most of its time off. But the day the Tour starts, Sample and her colleagues open half an hour early to be ready for the crowd. She said she’s seen it get up to 60 people, though it’s usually closer to 30.

St. Honore’s other gestures toward its heritage include free pastries for Bastille Day celebrations around the city and a 10 percent discount for members of a French culture group that meets once a month at the shop.

The first year BikePortland wrote about St. Honore’s Tour viewing parties, 2006, was also the year Transportation Commissioner Sam Adams got back from France and said he was putting things in place for a different French import: public bike sharing. So maybe it’s fitting that just in time for this year’s tour, the Biketown system might drop one of its northwesternmost stations across the street from St. Honore — just the latest French idea to go mainstream in northwest Portland.

They also sponsor/sponsored an OBRA race.

St Honoré rocks! The NW location is a great place to stop and refuel after a hike or bike in Forest Park. There’s also a St Honore in SW on Division Street with a nice patio in front with seating.

Yes, I meant SE. Who decided to put the W and E keys right next to each other? 😛

When I think of French bike culture, I think of someone riding a Velib in Paris smoking a cigarette and dinging at tourists. That famous bike race doesn’t even come to mind.

French bike culture exists everywhere that someone is using a bike with derailleurs–they invented ’em.

Did you have to run this article? Now I’m going to freakin’ hallucinate about their lemon bars until the next chance I have to get over there.