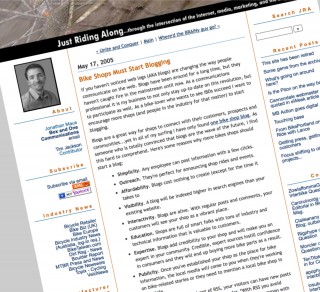 Screenshot from Jonathan’s other blog, circa 2005.

Once upon a time, a bike-industry media consultant named Jonathan Maus observed that “blogs are changing the way people communicate on the web.”

That was 11 years ago, to be precise. And Jonathan’s feeling at the time — blogs are amazing, why doesn’t everyone and everything have one? — has basically come true; these days we just call most of them “Facebook pages.”

The media revolution between 2005 and today has changed a lot of other things, and one of them is biking. In the first episode of the rebooted BikePortland podcast, Jonathan, producer Lillian Karabaic and I talk about the modern bike media.

For some of the show, we’re speaking as insiders of a sort. For other parts, we’re speaking as consumers. And we try to get at the ways that the shifting bike media have led, fed and followed changes in biking culture over those years, too. We also mention a few of our favorite media sources and the stories and reporters who inspire us.

As I mentioned, this will be the first episode of a sort of reboot of our podcast. In this and the coming episodes, we’ll be making an effort to tackle unusual and surprising subjects, or at least look at familiar subjects in old ways. We’re excited to get that rolling. We’ll also be using the podcast feed for one or two other things — in-depth audio interviews with Portland mayoral candidates, for one. As always, we’re eager to hear your thoughts and ideas.

Oh, and one last thing: We’ve introduced a new closing feature for the end of the podcast: we’re going to ask readers and listeners a question and share some of their replies. So here’s next month’s question:

What’s the most dangerous thing you’ve ever carried on a bike?

Talk to you next month.

You can subscribe to our monthly podcast with Stitcher or iTunes, subscribe by RSS, sign up to get an email notification each time we upload a new episode, or just listen to it above using Libsyn. Listen to past episodes here.

Nice choice on the music!
Glad the podcast is back on the interwaves.

I remember when blogs were invented in the late ’90s. A friend was so enthusiastic about them saying that they will be revolutionary. I thought it was cute and naïve but didn’t think much of it. (I wish I had that email still to read it nowadays.)
But you know, it’s kind of true. When I am involved in giving feedback about a cycling project, I’m “informed” by what I’ve read on A View From The Cycle Path blog, Bicycle Dutch, Bike Portland and others. Some inspire me to know what works and is tested and allows me to not be so timid in my suggestions but to bring things to a more advanced stage. Some other blogs make me realize the other way things can go and what we don’t want to go back to.
So if it wasn’t for these blogs, I would still be on the margins with the other disenfranchised people hoping that I might be thrown some crumbs by the privileged class.

(I haven’t listened to the podcast yet. You might have covered this already.)

The annual tradition of carrying dangerous things on bikes is coming up this June, more commonly known as GRILLED BY BIKE! http://shift2bikes.org/cal/viewpp2016.php#11-5522

Vote Up0Vote Down  Reply
« Finally! ODOT acknowledges need for a road diet on SW Barbur Blvd
What I learned at the City’s first open house for our new bike share system »