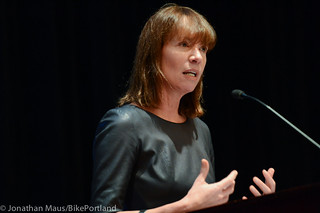 More than any time since I’ve been here, it seems as if Portland is opening its arms and ears to good ideas from elsewhere.

In the coming days and weeks we’ll be welcoming a bunch of nationally known experts on transportation for some timely talks. Delightfully, all of them are free.

With some, we’ll be doing more extensive previews based on advance interviews. With others, we’ll attend and report what they say.

But for now, here’s the roundup:

Saturday, Feb. 13, noon: David Bragdon, the former Portland politician who sorta seems like he’s been taking time off his current job as director of the NYC-based Transit Center nonprofit to call loudly for major reform at the Oregon Department of Transportation. Room 238 of the Smith Memorial Student Union, 1825 SW Broadway. More info here.

JSK (as she’s affectionately known in the bike-wonk world) will also speak in a free Metro-organized event at the Mission Theater at 6:30 p.m. on March 23. We’re setting up an advance Q&A and will keep you posted.

Quick! Someone hire JSK while she’s in town! 😉

Maybe she can replace Matthew Garrett.

Ooh, so when I travel for bizness I often bracket it with visiting friends or sightseeing and call it a “workation.” Sounds like I’ll have to swing through PDX on the 24th for a “wonkation”!

Hoping to get down to hear Sadik-Khan when she’s in town. For NYC, she did have good ideas, and the knack for persuading people that the ideas would be beneficial to city…which they were. Livability is a fundamental
consideration of her transportation infrastructure improvement ideas, which is something I admire her for.

Bragdon, I’m not sure about. While he calls for ODOT reform, comments of his about that in past bikeportland stories, to me seemed to lack substance in terms of what the reforms would be. Words with little real weight.

Don’t know those other two guys.