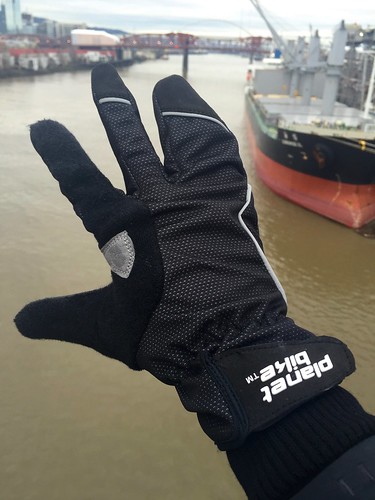 If you ride year-round in Portland, you’ve pretty much got to have a pair of gloves — or two, or three, depending on the weather. With temps ranging between 30 to 50 degrees and skies going from sunny and cold to wet and mild and every other combination you can think of these past few months, I’ve been rotating through five different pairs. Yes five. I’ve got two pairs for when it’s raining, two that I use either on their own or as liners if it’s really cold, and my newest pair: the Aquilo gloves from Planet Bike.

I’ve been a fan of Planet Bike for a long time. They make reliable and utilitarian products at a fair price and you can find their stuff everywhere. I also greatly respect that they’re committed to bike advocacy and were one of the first companies in the industry to have a full-time staff person devoted it: Advocacy Director Jay Ferm (whom I first met at the National Bike Summit in 2006). (Disclaimer: Planet Bike has also sponsored many years of BikePortland’s coverage from the Summit).

But being a good corporate citizen wouldn’t mean much if you made bad products. Fortunately that’s not the case with Planet Bike.

With their headquarters in Madison, Wisconsin, they have instant credibility for making gear that works in cold weather (not to mention Madison is one of only five “Platinum-level” bike-friendly cities). They offer two models of full-fingered gloves: the Borealis and the Aquilo. The Borealis is the best option when it’s really cold and wet and the Aquilo is meant for “spring-fall” — which makes a good choice for Portland’s relatively mild winters. 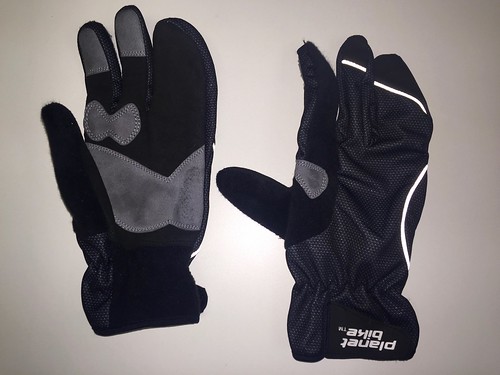 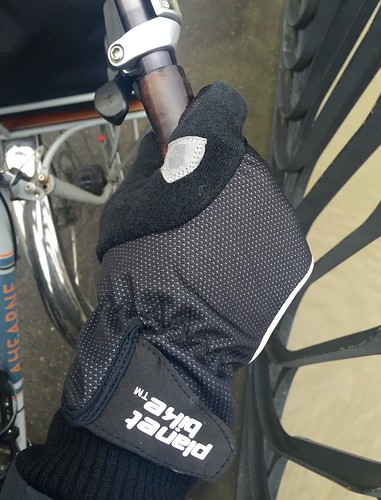 When I put these gloves on for the first time, my impression wasn’t great. They felt too thin. That’s not a bad thing; but I knew I wouldn’t be reaching for these when temps dropped into the 30s. On a cold day I love a nice puffy and warm glove. But larger and heavier gloves can constrict movement, overheat your hands quicker and are more of a pain to stuff in a pocket and carry around. Once I realized the Aquilos weren’t intended for the worst conditions, I began to warm up to them. In the past few months I’ve worn them when morning temps are above 40 degress and it’s not likely to rain. They’re great at taking the bite out of a chilly morning but I’ve yet to overheat in them.

Since fingers are warmest when they can touch each other (a la mitts), Planet Bike has opted for half-lobster arrangement on the Aquilos. At first I thought the lack of dexterity would bug me, but turns we only really need one of our two smallest fingers.

The Aquilos have all the features I look for in a glove: a large and soft fleece section on the thumb and forefinger for wiping water and various facial liquids; windproof material where it counts, reflective striping for safety; not too much padding (can’t stand “gel” gloves!) but enough to add some comfort; and extra material on the index and middle fingertips. I’m not a big fan of the velcro strap and the bright “Planet Bike” logo (I like my riding apparel to blend in and not be too loud or techy), but those are small nitpicks.

Overall this is a very solid pair of gloves. And the price is right too. Just $34.99 (the more stout Borealis is $41.99). That’s considerably less expensive than the other gloves I’m currently using: the $67 Winter Riding Gloves from SealSkinz and the $80 Crosspoint Softshell from Showers Pass (which I love, by the way).

Want to see more of our reviews? Check out the archives.

— This review is part of a promotional partnership with Cyclone Bicycle Supply who supplied us with the gloves at no cost. All opinions are our own.

After trying a lot of different and expensive pairs of biking gloves that didn’t cut the mustard, here’s my latest approach:

2. Put a couple pairs in my pannier to put on when and if the pair I am wearing gets too damp.

3. Hang used pairs on an accessible dry rack by the door at home.

This is a great option for those of us who have the habit of loosing biking gloves, as they are cheap and easy to replace.

If you have Raynaud’s Syndrome and frequently lose circulation in your digits at the first sign of cold (like me), these gloves look ideal. Hmmmm might have to order a pair and add it to my comprehensive glove and mitten collection.

Timely review, thanks JM! We’re having chilly mornings here in Cali but my current Performance gloves are too heavy, and Pearl Izumi liners still a bit light. I happen to have a torn ligament in my right pinkie that curls my finger (annoyingly), so it looks like this “half-lobster” arrangement may be just the thing! (I’ll order them through your link, of course, and I like that Bike Planet gives a big chunk to advocates as well).

here’s my cheapo work around for 40 degree wet road riding. I still ride with fingerless bike gloves but underneath them I also wear those thin gloves auto mechanics use with the grippy rubber stuff on the finger tips. they are cheap, durable and form fitting and keep your fingers warm down to about 45 degrees.

I have the Borealis and I don’t like them much… they get soaked and cold fast, and are then just heavy and bulky…

these look much nicer, and look to have room for a liner under… we’re all about layers in the PNW…

mostly I’ve switched to neoprene for the super cold days…

If you use liners with the Aquilos you might want to buy a size up. Mine are not big enough to wear a liner underneath. (I got a large, my usual glove size)

Which of your current five pairs work best in heavy rain?

It depends on how long you’re out in the heavy rain! When I was doing more training rides several hours long I would take two pairs of gloves because nothing lasts long enough. When I’m just riding around town, if it’s raining and cold I use my Showers Pass gloves with a slim cashmere glove liner as my go-to option.

Hmmm, cashmere…that sounds interesting. My old mild weather, sub 2 hour drizzle setup is.. Merino wool, under fingerless wool, or some other cheapo half glove. I’ve been wishing for something that maybe doesn’t exist!

yeah I have a thicker merino pair that i use too. The cashmere ones are a fluke. They were super-discounted and I was curious about them. Very warm and thin, like wool.. but I don’t think it’ll be as durable long-term.

Stupid question, but are they 100% waterproof? The only truly waterproof gloves I’ve discovered so far are Rapha’s. But at well over 100 bucks, they’re hardly for the lowly pleb.

I’ve found that gloves marketed for skiing rather than cycling tend to have better waterproofing and insulation. REI has some good options.

A bit too technical-looking for my taste and I also don’t love clothing slapped with giant logos, which seems rampant in the bike apparel industry. However, Planet Bike makes some decent and affordable stuff, so these gloves are worth checking out.

At Costco I got runner’s gloves for $12. Real tight weave blocks the wind well, synthetic material stays warm when wet, but drys fast and they are washable. They are stretchy enough to wear thin liner under.

Still it is always amusing to read the BP swag update.

I like the neoprene bar mitts, though I’ve only been using the right one because threading my hand in and out of it is a bit clumsy and I’m afraid to be unable to grab the bars because I was signalling a turn. It works well to have a clumsy heavy glove on the left hand but a thin wool one on the right with the shifter and electric power controls inside the mitt. It’s a bit of hassle to strap it onto the bike and take it off with our current morning/afternoon weather now, but it was great in the cold rain. Also not a fan of the reflective logos. They also make them for dropped bars.

Poly knit liners under Playtex Living (or Handsaver) Gloves normally used for dish washing or other household chores. 100% waterproof, inside and out, so only really suitable for those with normal circulation that don’t mind starting out a little cold or ending up a little clammy. Long cuffs tuck easily under jacket sleeves for ultimate rainwater shedability!

99% of weather conditions in this climate don’t need anything other than http://www.handerpants.com/

Kinco insuldatd work gloves – I’ve had a pair of these for 5 years and I can’t kill them: http://www.qcsupply.com/kinco-hi-vis-cold-weather-waterproof-insulated-gloves.html

The leather wets out, but my hands stay dry for the length of my commute – about 30 minutes. If you’re in the rain all day, these might not work, but if you just have a short commute 2x a day, these are great. Reflective strips on the back of the hand are great for giving hand signals.

Don’t appear to go down to size S, unfortunately.