Bikeway gaps really get on Portlanders’ nerves. That much is clear.

The week after Jonathan and I suggested that people enter their least favorite gaps on a Google Map, the map has 120 items scattered around the Portland area.

Gaps like this one, at SW 24th and Barbur, where a bike lane dead-ends into a right-turn lane on what is usually a five-lane state highway, and vanishes completely on the other side of the street to make room for a woody hillside: 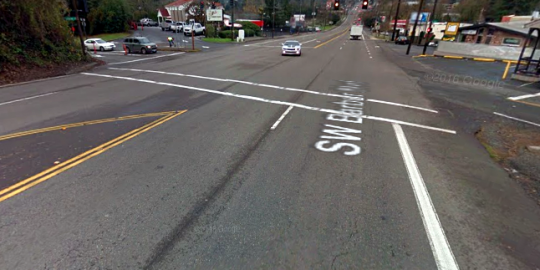 Or this part of Southeast Woodstock Street, where one of Portland’s best little business districts is apparently incompatible with a bike lane:

Or this odd block of NW Vaughn, where the bike lane becomes a few sharrows in a left-hand lane rather than connecting to the useful northbound bike lane on 14th.

This is a resource we’ll definitely use to inform future coverage. Maybe it’s even one that city staffers will be able to use, both to make sure their maps are correct — the project was partly inspired, after all, but the fact that the gap where Martin Greenough was killed in December was a straight blue line on the city map — and to find spots where small bits of work could deliver big payoffs.

Thank you for helping us with this project.

That last one is Vaughn, not Everett.

This is a super interesting and useful map! I enjoyed zooming around to the spots I frequent and realizing how pathetic all these gaps are! As a regular rider, I have learned to deal with the gaps on my regular routes, but I was surprised by a brand new gap today! I had to drop of some files downtown from the Central Eastside and was using the new bike lane on SW 3rd. One minute I am in the bike lane, the next minute it is gone! There was likely a sign somewhere, but I was keeping my eyes on the adjacent traffic and looking for a street sign so I missed it if it were there. Not a problem for me, I would have taken the lane anyway, but very revealing if you consider a new rider or someone using BIketown.

Have you shared this map with anyone from PBOT or Metro? I would love to hear their response.

From my experience on the PBOT BAC, I’d say PBOT is (rightly) less concerned about fixing “unprotected” bike lane gaps, which are normally designed for “young fearless” cyclists, than they are about improving routes for the much larger and influential “interested but concerned” cyclists. Such infrastructure includes protected bike lanes and green streets (bike boulevards), such as SE Clinton, the 20s, the 130s, and the 4M. From what I have observed here in Greensboro NC, I think PBOT’s priorities are correct and justified – unprotected bike lanes give riders a very false sense of security (as do sharrows), and should only be used when there is no other useful alternative (such as on SW Tewilliger.)

I was just on SW Terwilliger for like the second time yesterday. Keep in mind, I have very limited experience, but is there anything stopping the city from narrowing the roadway by moving the curbs and taking all of the bike lane width and adding it to the sidewalk on the side, converting it into a ~14 foot wide MUP?

Depends. If they have to move a sewer, the cost can become rather prohibitive. In addition, PBOT is required to provide a place for storm water to run off to in SW Portland, such as a bioswale or grassy patch between the MUP and street. In addition, PBOT has noticed that given a choice, most cyclists will bypass the short MUP and use the street, no matter how narrow it is, so they ask, why bother? If the MUP is part of a local safe-routes-to-school safety project, then PBOT will more likely do it. The cost is roughly $200 per linear foot, for the wider path, grass patch, and retaining walls, assuming sewers don’t need to be moved.

Other than cost?
Infilling the wide planter strip and redoing the ramp at the bottom would cost a lot less than moving curb.

Though I may not be as experienced working for the government, I still hold more than ten years riding around on a wide variety of infrastructure, and I respectfully disagree with the idea that unprotected bike lanes offer little. While it is true they offer little in the way of physical separation and therefore actual safety, they do provide a sense of place and belonging that bicycles should be and are allowed on the road. For the majority of drivers, that is enough to get the point, and the more of it they see, the more likely they are to take the markings seriously and actually give cyclists the space they need and deserve. Without them, drivers tend to believe that bicycles have no place on the road, which, in my opinion, leads to more hostile feelings, actions, and as displayed in another article recently, dangerous road rage. When the bike lanes disappear because of thoughtless planning and road design, it is evidence that the road engineers themselves are not taking the plight of cyclists seriously. It costs comparatively little in paint and brain power to offer cyclists a small piece of the road in the form of unprotected (and please, for god’s sake, non-door zone) bike lanes. For those of us who do ride our bikes for transportation on a regular basis, we may not particularly enjoy loud, fast traffic speeding right past, but it is still preferable to being made feel like we’re holding up the whole parade just because we’re trying to get somewhere.

I do not disagree with what you say: unprotected bike lane stripes, signage, etc does indeed help to have a traffic calming effect on busy streets. However, most of the users of those facilities, like the both of us, are either more experienced or braver (or both).

My point is PBOT is trying to expand the bicycle system in Portland, which requires more funding, a lot more. To justify greater funding, the bike system needs to attract a lot more users, not just the brave or experienced, but also the scared and occasional recreational riders, “interested but concerned” as Roger Geller politely calls them. They generally avoid any busy street unless they have no choice. Hence PBOT’s prioritizing greenways and protected bike lanes and or cycletracks over fixing bike lane gaps. A kinder, gentler bike network, to borrow a Bushism.

Closing 90% of our neighborhood streets to cut-through auto traffic would be a very inexpensive way to boost ridership and funding. If drivers want to move faster, they need to pay for it.

Again, I want to emphasize two points: a) more non-protected lanes send the message that bicycles have a place, both on our roads and as a legitimate form of transportation b) the safer those streets become as a result, the more likely “interested but concerned” will be to use them, and the more “brave and fearless” (I hate these labels) are likely to stay that way.

Somewhere along the line we have to realize there’s simply not funding or political will to build the holy grail of cycling infrastructure that’s going to magically convert 80% of the population into riding bikes. Little snippets of protected bikeways here, strange amalgamations of lanes and routes there become convenient excuses while we sit around and wait to cater to a fabled population of non-cyclists who we think are going to get swept up in some grand wave when someday a magic wand is waved over the city that converts it into Copenhagen. You have to learn to walk before you can run, and so far, our cycling infrastructure has barely learned to crawl.

A bike lane is only as good as it weakest connection or gap. I have spken with plenty of tentative bike riders scared off of almost good routes by a couple of terrible gaps. Interstate Ave is a great example: I know someone who works on Swan Island who won’t use this route because of the terrifying gap at the Larrabee viaduct (my wife wont ride it either). Please do not be so quick to dismiss bike lanes- they COULD serve a lot more people if the City invested in faxing gaps and improving connections to develop a robust network.

I don’t dismiss painted bike lanes at all, it is just that they are over-used, especially on streets that ought to have protected bike facilities. PBOT, especially in the 90s, over-subscribed to their use, at the exclusion of better (but more expensive) facilities. Bike lanes are an integral part of a balanced bike network, but not a substitute for it. It’s a bit like using carbs as a substitute for protein. East Portland is full of bike lanes, with very few gaps, and yet has the lowest rate of bike usage in the whole city.

I agree, making Portland “as good as Copenhagen” is prohibitively expensive (aside from from everything else, Copenhagen and Amsterdam are both flat medieval swamps, whereas Portland has actual hills, more like Lyon, Newcastle or Rome, but with better bike usage rates). The emergency services would likely veto many of the street blockages called for by Eric, but I agree, blocking local residential streets would be the most inexpensive solution.

Painted bike lanes only work on local streets with little to no motor traffic. Additionally, motor traffic should be limited to 15-20 MPH on those streets. Anywhere else, especially on arterials, needs protected bike lanes.

Wait…I have not had time to look or comment yet…..I’m sure I can find a few more…….

Love the map. Just noticed some map updates might be needed. 102nd between halsey and fremont gap has been closed…