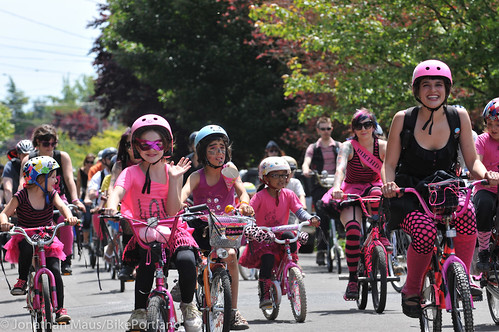 Find your thing, then find other people who like it too.
(Photo: J. Maus/BikePortland)

Tuesday was about as wonderful a day for Northwest winter biking as anyone could wish for, and that feels like a sign that the wet, wet winter of 2015-2016 has started rolling away.

(Punxsutawney Phil, for the record, thinks so too.)

While we start to think about spring, it’s a good time to start thinking about where to find good times on bikes. So let’s do something we’ve been wanting to get done for a while and share a list of all the local bike-related Facebook groups we know of.

This won’t be a complete directory, but we’re eager to get your additions in the comments.

Grilled by Bike Club – Each ride ends in a meal that was prepared on the way.

Move by Bike – Pay it forward by chipping in on a few of these, and you will probably get people to show up and move all your stuff to your new place for the cost of a good time plus food before and after.

Ladies Let’s Ride – A weekly Sunday ride of 35-50 miles, plus mid-week rides and events in the summer.

Portland Bike Party – Colorful, upbeat roll through the streets once a month or so.

Zoobomb – The Sunday-night downhill cruise that can only exist in Portland.

Bike Milwaukie – One of the region’s most active.

BikeLoudPDX community – For folks who take their fun with a slice of action.

Midnight Mystery Ride – Where will it go? The route is new each month, but there will be music on the way, alcohol at the end, and hardly any cars in between.

The Sprockettes – The incomparable women’s bike-dance brigade has graduated into offering a summer camp for girls.

Butts on Bikes – Low-pressure social rides, mostly on the west side.

Cross Crusade – The local racing series is all grown up these days.

Portland and Mt. Hood Fat Bikes – Helping you head for the hills since January 2016.

Carfree Portland – “People thriving in Portland without automobiles, and those who aspire to live carfree.”

Sandy Ridge Trailhead Mountain Bikers – For when you’re missing the forest (or the trees).

Ten years ago, urban bike fun exploded in Portland around the digital tools of the time: listserv, a calendar and a wiki. Shift became the great bike-fun group of the 2000s. Today it lives on mostly through the annual Pedalpalooza festival it created. But though the traditions, the faces and the communication tools will keep changing, bike fun will always be with us. These days, Facebook is a pretty good place to see it blossom.

Speaking of which: Who’d we miss?

I can’t help but be disappointed all of this has moved to Facebook. For many reasons.

I’m an active user of Facebook so enjoy everything being on Facebook. I can sync all my Facebook events with my Google Calendar. Where would you prefer the groups be?

I agree…
I don’t like Facebook and do not use it.
would be nice if the group privacy setting was set for anyone can view these groups.

I’m disappointed that these groups are starting to move away from shift. As someone who rejects Facebook’s prying eyes into my personal life, I have no way to participate in these groups.

FWIW, there are ways to sign up for email alerts from these groups if you were obliged. You could make a ‘fake’ FB account to do so.

Grilled by Bike Club posts their bigger rides on the Shift calendar, but smaller impromptu rides, not so much.

I thought about going that route, but Face Book will ban you if you provide a fake name.

You mean Bikey McBikerson is too obvious? 😉

That would probably work. I have a friend named “Curlaoke Curlaoke.”

It’s getting harder to make fakebook accounts, now you need a legitimate email instead of just using 10minutemail.

I have started and utilized multiple groups on FB for cycling (advocacy and recreation). As someone who volunteers his free time it is what works best for me, and gets info to the most people as quickly as possible. If you don’t use FB and want to be a part of a group, contact the group and offer up an additional Communication strategy that you would like to lead. Or, start your own group using whatever tools you prefer.

and for those not on Facebook, we also cross-post our events on our forums http://www.ohpv.org/forums

Oregon Randonneurs: https://www.facebook.com/groups/217861371586161/
“Randonneuring is long-distance unsupported endurance cycling. This style of riding is non-competitive in nature, and self-sufficiency is paramount. “

For two, a group (is currently meeting a few times a month to overhaul the shift calendar so that it can be easily extended to do things like have a mobile app (already in progress), and *optionally* integrate with facebook (planned). Here’s the next meetup (this sunday!) and you can join the group (sponsored by One Hwang’s Techies on Bikes) via the same link:

Be the change you want to see, particularly people like me who would rather have a larger audience for events than just facebookers. You can start small: cross-post your events on the shift calendar even if you have an FB event!

Cycle Wild is a great group for touring and camping! http://www.cyclewild.org/

Thank you for the mention!

This explains the surge in interest. Thanks,
Micheal!

Thanks for the mention! We had quite a dozen new folks hop on our group page today as a result.