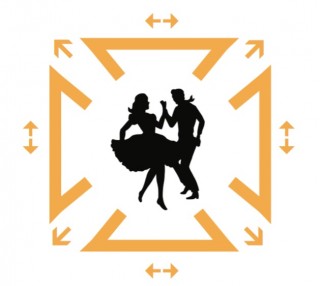 Some days it’s impossible not to love the City of Portland, where transportation geekery and fun often intersect in memorable ways.

Remember that new signal at NW 11th and Couch we told you about last week? To celebrate it’s activation the bureau of transportation is hosting a dance. A barn dance to be exact. And it will happen in the intersection. 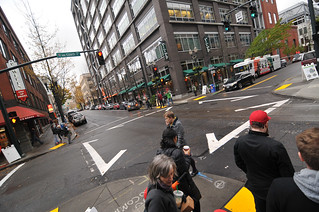 How the heck does a traffic signal inspire a city-sanctioned event where people will dance in the streets?

It has to do with three men: Henry Barnes, John Buchanan, and Peter Koonce.

Barnes was a colorful and innovative traffic engineer who worked in several cities between the 1940s and his death in 1968. He was particularly famous for his work with signals and ahead of his time in putting people first (a mindset that apparently found him at loggerheads with car-centric, freeway builder Robert Moses during his tenure in New York City). One outcome of Barnes’ philosophy was a signalized intersection design where priority is given to people walking in all directions simultaneously while people in cars have to wait. Today these are called “pedestrian scramble signals” and they’re in use all over the country (including Portland as of last week).

In his 1965 autobiography The Man With the Red and Green Eyes, Barnes recalls a reporter from a city where one of these signals had been installed. The reporter, John Buchanan, wrote: “Barnes has made the people so happy they’re dancing in the streets.” After that article, this type of walking-centric signal became known as the “Barnes Dance.”

The Portland Bureau of Transportation’s Peter Koonce is in charge of our city’s 1,100 signals. He’s also a big fan of the Barnes Dance, having first mentioned it publicly in a blog post in 2011. Since then Koonce has become a strong advocate for the signals, even working it into the Pedestrian Phasing section of the Federal Highway Administration’s traffic signal timing manual which he wrote. (The FHWA’s website has an entire page devoted to the Barnes Dance.)

For a dedicated engineer like Peter Koonce, the installation of a Barnes Dance in his hometown must be like a dream come true.

You can help celebrate this milestone in Portland’s transportation history by joining Koonce and his bosses PBOT Director Leah Treat and Commissioner of Transportation Steve Novick for a barn dance to celebrate the Barnes Dance at 10:00 am this Saturday, December 5th.

Learn more about the event and the new signal at PortlandOregon.gov.

Ah, so that’s the “Barnes Dance” one commenter referred to! I (seriously) thought it was a westsider complaining about trying to cross SW Barnes…

No. It isn’t on the SW Barnes Road which has seen many pedestrian deaths and injuries over the past few years, even directly by St. Vincent’s hospital.

Quite familiar with it, unfortunately.

This scramble needs artwork or zebra stripes to make the diagonal obvious.

Great dance! Worse grammar, though. “It’s” is not a possessive.

I was trying to find the Street films video Clarence Eckerson made about the Barnes signal in NYC, but could not find it anywhere. It must have been taken down. Shame, it was a fantastic visual!

Perhaps you mean this one:

Eckerson also made this one about a crossing in LA:

I commute through this intersection on my bike. Initially, I was excited about the changes, but now that I’ve had a chance to try it out a few times, I feel like it’s worse than before with 4-way stop signs.

I ride west on Couch and turn left to go south on 11th. Today, it took three light cycles before I could make my turn, and there were only three cars stopped ahead of me. Left turning traffic must yield to oncoming traffic, so I had to wait and wait and wait as traffic went through on the green light. When I finally had a green signal and no oncoming traffic, I was held up in the middle of the intersection to avoid a pedestrian who had disregarded the red hand.

I really should switch to Stark…

Why don’t you simply cross with pedestrians?

I was trying to do it all legally to see how it worked. To cross with the pedestrians, I would have to ride up on the sidewalk to get around the cars in front of me. I’ll probably just make up my own, not quite legal way through this mess or try a longer, less direct route.

Would a copenhagen left work for you? Its pretty convenient for scenarios like this.

Can’t squeeze past the cars on the right side because the lane is too close to the on-street parking, and there’s also a curb bulb-out too that would block forward movement.

This is nothing new, just question the design. When I was a kid in eastern Mass. when the lights turned red and yellow at once (so only the green was not lit) it meant pedestrian crossing all directions. And driving through the red-yellow was a very serious offense. Always wondered why other states didn’t have that system. It felt very, very safe.

My family walked through this intersection last weekend and we stopped so I could explain it to my wife and son. We watched for a few minutes but nobody walked diagonally through the intersection. The only reason I knew about it was the prior story here on BP. The markings on the street are not obvious enough. Hopefully this event made it more clear to folks.

Awww, we missed it. I hope this was delightful as it sounds.