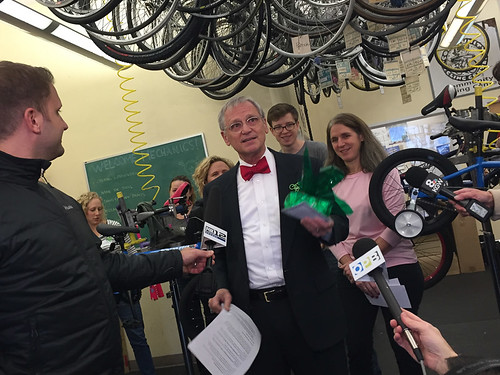 Looking to make his famous holiday fruitcake last even longer, Portland’s representative in the United States Congress, Earl Blumenauer, has issued a citywide challenge: He wants Portlanders to help provide 1,000 bikes for kids in the month of December. 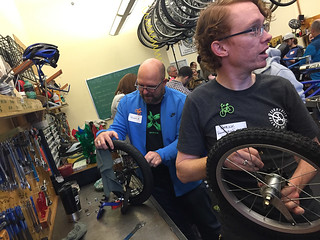 Blumenauer spoke this morning in the crowded volunteer service area of the Community Cycling Center on Northeast Alberta Street. “This is a way to bring together two of my favorite things,” the congressman said, “bicycles and fruitcake.”

Last year Blumenauer took his first foray into ice cream advocacy when he teamed with Portland’s famous Salt & Straw ice cream shop to make a new flavor based on his fruitcake recipe. Blumenauer is known for his holiday fruitcake, which he delivers along with a personal note to friends and colleagues each year.

Now Blumenauer and Salt & Straw are back again to re-up their partnership. And this year they’ve added corporate heavyweight Nike into the mix.

Together this unlikely trio have issued a 1,000 bike challenge to Portland.

Starting this Friday (11/27) at all three Salt & Straw locations (NW 23rd, NE Alberta, and SE Division) you can add a new bike for a child in need to your ice cream order. Salt & Straw co-founder Kim Malek said that for every $50 donation made in one of their stores, the company will match it with another $50, providing two bikes for two kids. (Donations will also be accepted with orders made at SaltandStraw.com).

Salt & Straw also sells ice cream at the sprawling Nike World Headquarters in Beaverton. For every gift-pack of ice cream purchased by Nike employees, the company will donate $25 to the Community Cycling Center. Salt & Straw will then match that with another $25 until Nike has donated a total of 100 bikes.

At this morning’s event, Nike Senior Director of Public Affairs Julia Brim-Edwards said her company sees this as a perfect partnership because of Nike’s commitment to getting kids more active. Nike is also donating volunteer time by having their employees assemble the donated bikes.

The Community Cycling Center usually raises enough money around the holidays to provide 400-450 bikes for kids — most of them given out during their big Holiday Bike Drive event that takes place early next month. If this challenge is met it would more than double the number of bikes they typically provide to kids.

A longtime supporter of the Community Cycling Center, Congressman Blumenauer kicked things off this morning by handing CCC CEO Mychal Tetteh a check for $500 — which will get 10 bikes refurbished and built up for kids who otherwise might not get one.

“Cycling is one of the definitions of our community,” Blumenauer said, “But we have a long way to go to make sure everyone can be part of it.”

Great job Earl! Way to keep the spirit of bike-partisanship and fruitcakes alive while making the holidays even more special for Portland kids.

I have fond memories of helping Earl deliver some of those fruitcakes by bike when Congress got stuck in session till nearly xmas eve many moons ago and he wasn’t able to do them all himself.

Earl is a fantastic human being and a great representative.

Hey Earl, I know where you can get a bunch of bikes to donate. You’ll just have to scrape the orange paint off. 😉

Most excellent! I wasn’t able to find the fruitcake flavor in the online selections, so I’ll have to make a special trip to Portland. Darn!

Will be available online & in stores on Friday, Nov 27! 🙂