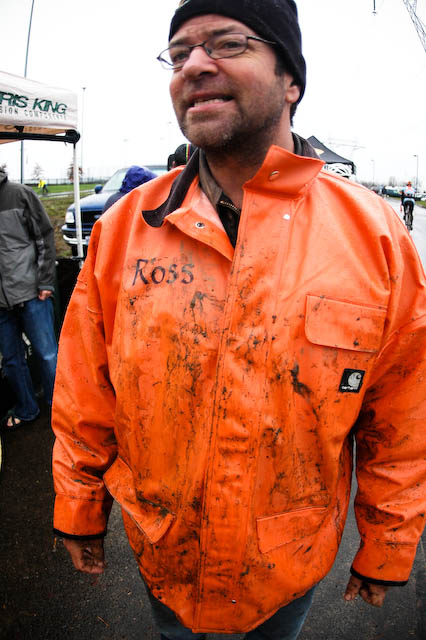 Brad Ross, the man behind the Cross Crusade, which has grown into one of most successful cyclocross race series in the world, has announced his retirement. Ross was also the director of the Cascade Cycling Classic and many other races during his career.

Ross made his announcement at Portland International Raceway on Sunday from behind the megaphone as racers assembled at the starting line. There was no fanfare and no press release. It was typical style from someone who isn’t much for formalities and has spent his entire career with a singular focus: put on really fun bike races.

Ross took over as head promoter of the Crusade in 1995 and has seen it grow to what he calls “mythical status” over the past few decades. Mythical or not, the Crusade has definitely garnered national attention for Portland’s cyclocross scene and has introduced thousands of people to the thrill of bike racing.

In 2006 Ross and the Crusade hit the big time with a feature story in the New York Times. “On the Portland course,” the Times reporter shared, “… a group called the Gentle Lovers, made up of amateur riders and friends, installed a wood-stove-fired hot tub. Wearing red Speedos with hearts on them and fueled by plenty of refreshments, the Gentle Lovers danced, slipped and swam to music from a nearby stereo.”

In 2010, the Crusade hit its peak in terms of participation. At the opening race held at Alpenrose Velodrome (just a few miles from Ross’s home), 1,762 people participated. That’s one of the largest single-day crowds ever assembled in the history of the sport.

That 2010 race was a far cry from the 80 or so people who used to show up on the weekends back when Ross first started promoting the Crusade in the mid 1990s. Back then Ross and his friends Rick Potestio and Russ Humberston would make just enough money at the end of the weekend to buy pizza and beer.

Ross, now 49, told me today that, “It was finally time.” “At the moment,” he added, “I have no future plans other than to get reaquainted with my family and enjoy the holidays.”

The Crusade will likely live on without Ross (he has built up a very capable crew over the years); but it won’t be the same without his laid-back and irreverant style.

Speaking of which, a video from this weekend’s races (created by the Crusade’s lead sponsor, River City Bicycles) perfectly captures the fun racing scene that Ross has cultivated over these past 20 years:

Thanks for your dedication to cyclocross Brad! And thank you for giving us all the glory and goodness that is the Cross Crusade.

(For more on Brad and the Cross Crusade, read the our 2013 story published on the 20th anniversary of the series.)

Congrats! Ross!! Enjoy your next phase.

I still remember that wood fired hot tub…it brings a wide smile to my face every time I think about it.

Haven’t been able to get out and race much the last few seasons. Is there any chance this has to do with the increase in retaining venues? Seems like the Crusade has lost a number of them over the years.

Thanks for all you’ve done Brad. You’ve made Portland the US mecca of cross!

Thank you Brad & Crusade crew for all you’ve done for Oregon cyclocross.

Who am I going to share my bourbon with now?

Thanks Brad, Cross Crusade has been a blast.

Thanks for making racing fun, Brad!

Bend Oregon is getting a real gem. Thanks for all the good times. You’ve made the Portland bike racing scene what it is today.