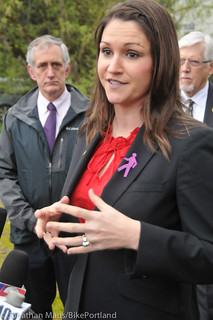 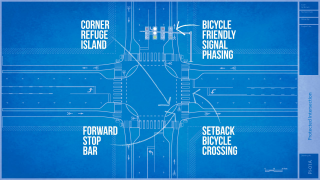 Powell and 122nd also happens to be one of two intersections that were used by Portland resident Nick Falbo as a model for a groundbreaking video that itemized the characteristics of a “protected intersection” that could prevent most bike-car turning conflicts. That concept has since led to working models being approved in Austin, Davis, Salt Lake City and Boston. Last month, one member of the advisory committee for the state’s Outer Powell project told us she thought the design would be possible there.

In a comment on BikePortland last month, the Oregon Department of Transportation project manager for Powell said the current process “will not preclude” raised bike lanes as part of the plan.

Meanwhile the planning process that’ll determine how this and future money will be spent on Powell continues. The next meeting of the “decision committee” for Outer Powell is set for the fall. On Saturday, Aug. 1, project staff will lead a bike ride for people who use Powell to talk about possibilities for improving the street. 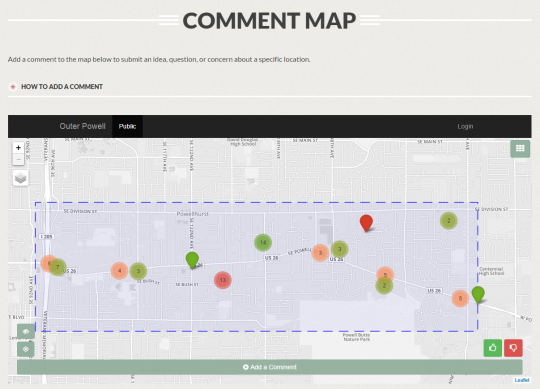 Correction 7/7: An earlier version of this post listed the wrong date for the next meeting of the Outer Powell decision committee.

$1.2M/block just to contain cars a little more than they are now!
Talk about defensive expenditures.
I wonder what percentage of these funds come from car-related fees and taxes and what percentage is from other sources?

Nearly 100% of the funding comes from gas taxes and vehicle registration fees, which by state law must be spent on infrastructure, both from ODOT and PBOT. The $3 million from PBOT is actually from an 2015-18 MTIP REOF project, the $9 million “East Portland Active Transportation to Employment and Education”.

Thanks for that clarification.

I realize that state law stipulates how gas taxes must be spent, but state law doesn’t preclude spending more than we take in in gas taxes on this kind of infrastructure. All states do it, including Oregon. To learn that this project is the exception with such a high proportion of the funding coming from fees and taxes is interesting.

It’s likely that all utilities adjacent and under the road will need re-build/relocation. Also, drainage and sewer. That stuff adds up fast.

I don’t see the point of this project if they will not also be fixing the parts further East and West. East of 136th there’s “bike lanes” that also double as highway shoulders, sidewalks, on street parking, garbage collections, etc.

At best, we will get a very short, minor improvement on existing bike lanes, whereas people driving will have a wider surface, that allows for plenty of speed and pedestrian-killing-ability.

And what’s up with the setback? You could put entire houses on those setbacks. They don’t belong in an urban environment.

The setback was established to allow for further roadway expansion in the future. The plan lists future transit corridor, on-street parking, or extra travel lanes as potential future options.

At best the area will get much needed sidewalks, allowing residents to more safely get to local businesses, bus connections, school, and work.

Sorry, but sidewalks need to be the priority here.

If sidewalks were really the priority, they would add sidewalks to the entirety of Powell. Sidewalks (and bike lanes) are great! But they’re not very useful when they don’t connect to anything. Or when they’re so narrow that it’s impossible to walk side by side, especially when they’re further narrowed by road signs and light poles.

I agree that the best solution is to put in sidewalks for the whole length of the street, but you have to start somewhere.

Ah, that’s at least slightly better… I know the area a bit. I used to have a friend living over at 119th. Walking to the safeway was … interesting. Lots of people are driving through there way too quickly for conditions (lack of sidewalks and crosswalks, etc).

ODOT and the project team are very excited about the funding and appreciate all the hard work Rep. Fagan, Rep. Vega Pederson and the others put into securing money to design and build this project.

Michael, just a couple of things:

The story says that “the next meeting of the “decision committee” for Outer Powell is set for Tuesday, June 23.” That meeting was indeed held in June. The next one will be in September or October.

If I said “proclude” I meant to say “preclude.” (That’s the former journalist in me writing ;))

David H and ethan: The funding that has been identified for this project would build sidewalks, bike facilities, a center turn lane and other project elements from SE 122nd Ave to SE 136th Ave. That’s according to our current, planning-level estimate. There is not quite enough money to build the additional six blocks from SE 116th Ave to SE 122nd Ave. That estimate could change as we continue analyzing the environmental impacts of the project (right of way acquisition needs, storm water requirements, for example). So, in theory, we ultimately might be able to build more than the 14 blocks. We will know more in a while and, more importantly, during the design work. But right now it’s looking like the 14 blocks. (I’ll see you later this afternoon at the EPAP Technical Advisory Committee meeting if you want to discuss this in more detail.)

Mike, thanks and sorry about the error on the meeting date. I’ll fix.

Thanks for the calrification, david hampsten. Do you know anything about the 136th project that is nearly complete? That project infilled sidewalk so that the east side of the street had a continuous sidewalk from Foster to Division. There were also crosswalks, stormwater planters and street trees added, plus space created for a bike lane. Even though the northbound lane now has room (I believe) for a bike lane from Foster to Division, PBOT was considering not striping because there is not a corresponding southbound lane. You seem to know what is going on in the area, do you know what is up with this bike lane?

MaxD, I have bugged PBOT about the bike lanes on 136th at the Budget/Bureau Advisory Committee meetings (now every third Wednesday, 3-5 pm, in Room C of the Portland Bldg, public also welcome), as the designated East Portland representative. (The recently retired Assistant Director) Greg Jones told me last spring that PBOT would monitor traffic before deciding to either put in bike lanes or put in sharrows, or some other treatment, on 136th. The remaining (west side) sidewalks between Powell & Foster are at the top of the “safety” project list for the street fee. I expect the debate will start again within the next two weeks. We are also pursuing the same treatments for NE 148th from Glisan to Sandy.

Related to 122nd, PBOT is apparently looking into some sort of “protected bike lane” for parts of the roadway between NE Airport Way and SE Foster, as part of its negotiations with TriMet for bus 71 improvements.

Thanks for the thorough reply, I will put the PBOT meeting on my calendar and show up if I can.

Wouldn’t they be required to add bike lanes if they are redoing the road surface?

was carless
Reply to  ethan

Has anyone else noticed this trend in the comments this week?

Thanks for your efforts in servicing funding to improve safety for one of Oregon’s most dangerous roads. I am urging the project planners to install fully-separated protected bike lanes and protected intersections (see: http://protectedintersection.com). These treatments are proven to be safe and are the gold standard for bike infrastructure. Simply painting a wider buffer is not sufficient for safety. No one should die or be injured on our streets. Thank you for your consideration.

Not usually a big fan of red light cams but 122 at Powell would be a no brainer. Stand there for a few min on any given day and you would see a shocking abuse of the law. That goes for all the lights on 122. These east county mega intersections are horrible.

Isn’t TriMet looking at Bus Rapid Transit on Powell? How will that project affect this one (and vice-versa)?

Right now most people believe that the BRT project will use Powell up to 82nd or I-205, then switch to Division farther east.

Steve B
Reply to  Joseph E

I believe they have narrowed it down to 82nd.
http://www.oregonmetro.gov/sites/default/files/3Adopted%20decisions%20on%20transit%20routes%20031615.pdf

$1.2M per block for another isolated segment.

Finally, I realize that 8-80 isn’t an age range, it’s a percentage. There’s a good solution out there, and we’ll put in anywhere between 8% to 80% of the effort necessary to make it happen.

was carless
Reply to  Champs

A full rebuild of all of SE Powell to 182nd is about 9.0 miles, or roughly 170 blocks. A rebuild at 1.2 million/block would then cost about $204 million, or roughly $30 million more than the Tillikum Bridge.

I don’t think people realize how poorly funded our infrastructure system in the US is.

davemess
Reply to  was carless

Yes, most major improvements like that are going to have to be done piecemeal over time. Better to at least get some of it.

Yes, our (ODOT) estimate for rebuilding Outer Powell from SE 99th Ave. to SE 176th Ave. (Portland/Gresham border) is about $90 million. ODOT has a lot of funding needs for Powell, 82nd Ave, Barbur etc. All of the community support for securing funding has been a huge help to the legislators in getting money to build part of this project.

If we have to do it piecemeal, what about starting at the elementary schools and building out? Put on almost the same level priority the most difficult intersections and then speed enforcement and we might be able to get citywide improvements.