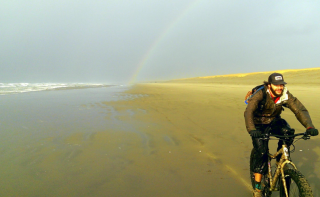 This week’s Monday Roundup is brought to you by the first annual Bike Peace Music Festival, a full weekend (July 17-18) of biking, food and live music in the Columbia River Gorge!

Here are the bike links from around the world that caught our eyes this past week:

Fatbiking the coast: Oregon’s, that is. The Path Less Pedaled has seven tips for the trip.

Protected intersections: American bike plans of the early 1970s called for pseudo-Dutch treatments of bike lanes and intersections, but the Federal Highway Administration was persuaded (with no evidence) that Americans wouldn’t understand them.

Unprepared drivers: In a 35-minute simulation that includes 22 variations of the most common ways teen drivers crash, 43 percent of newly licensed teens crashed at least once.

Rails to trails: CityLab has a new-fangled HTML timeline of the history of the movement.

Washington transpo bill: Olympia’s bundle of highway expansions, bikeway funding and transit allowances has been OK’d by the state House but its ban on a low-carbon fuel standard is making progressives uncomfortable.

Female mechanics: “Customer, in response to advice by Georgina: ‘Are you sure?’ Georgina: ‘Shall I get one of the guys to tell you?'” And other painful moments from wrench life.

Bike sabotage: Why do people drop tacks and string wires on bikeways? The Guardian tallies horror stories but doesn’t find an answer.

Vision 30,000: American roads are by far the most dangerous in the developed world, The Economist explains, mostly because of states in the southeast and interior west.

Bus fatalities: The rhetorical war between NYC’s transit union and its street-safety advocates keeps getting uglier. At issue: whether police should be able to arrest bus operators involved in collisions.

Vision Zero: Ann Arbor, Mich.; Fargo, N.D.; and Provo, Utah all have populations of about 115,000 and all saw zero traffic fatalities for at least one recent year.

Many Newly Licensed Drivers Don’t Know How To Drive

And in other breaking stories here at NoDuhNews, the sky is blue!

It’s not quite so No Duh as all that. Drawing attention to this is super important. If this is how just-certified pilots performed in simulations we wouldn’t stand for it.

Wow. This statement in the Guardian story about bike-hate really leaped out at me:

…rather than adjusting their driving to the cyclist’s apparent vulnerability, the only real trigger for them to take proper care is a possible legal sanction.

It’s the result of an experiment which measured the passing distances drivers observed around a cyclists wearing three different labeled tabards: a “learner” type message, a “please be polite” type message, and one implying that the cyclist was a police officer with a camera. It was no small test, either: they measured 5700 events. The supposed police cyclist was given the widest berth and the slowest passes. The “please be polite” cyclist was buzzed and endangered most frequently.

Strong evidence that (fear of) enforcement will be an effective part of Vision Zero!

And, the enforcement needs to be delivered with a heavy-enough hand to be feared.

El Biciclero has been saying exactly that here for years.

“…Strong evidence that (fear of) enforcement will be an effective part of Vision Zero!” hawley

If the public is prepared and willing to pay to provide additional enforcement of bike involved traffic incidents, necessary to help VZ be effective.

Vision Zero seems to be one of those types of concepts that some people like to talk up, but when it comes down to the public needing to do what the concept seeks to accomplish, I’m wondering what level of support for that will develop.

Sorry, haven’t yet read the Guardian story. The subject of why some people deliberately do things to endanger vulnerable road users, is interesting though. Two main reasons or a combination of both are likely: they’re not too bright, or criminally minded. If they can be caught, make the consequences of their act to them personally, very severe. Catching them and determining whether what they did was intentional is the hard part.

Hmm, guess it’s time to get that “You’re on camera and will be ticketed” jersey made up.

Yeaterday’s Sunday Oregnian story (7/5/15),”It Only Seems That All Trails Lead to Banks,” deserves some attention! Now if only a way could be found to run a trail (Springwater extension?) from the west end of the Tillikum Xing bridge (which opens on 12 September this year) to Hillsboro/Forest Grove/Banks! If that ever takes place, that will be a big step forward!

I note Bend, Oregon, is on the 80,000+ population cities with no fatals for one year. I also recall they have over 25? 30? modern roundabouts.

And a lot of tourist traffic too.

I found the piece on bike lane history in Davis mildly amusing. I moved to Davis in the late ’70s and stayed for over two decades. There were only a few bike lanes and two bike paths in those early “Golden Years”. The only crashes involving serious injuries to cyclists back at that time were on the bike path that functioned as a protected bike lane.

For those who weren’t there, back in the ’70s and early ’80s Davis had a modal bike share that, while never formally measured, was clearly well over 50% and may have been over 80%. Yet, somehow (hint: zero-tolerance traffic law enforcement) it did this with almost no formal bike infrastructure.

So, here’s why I was amused. The linked piece just takes it as Gospel that the only way to accommodate and attract large numbers of people to cycling is to segregate, in spite of the fact that segregated facilities will be built for failure (too narrow because of initial low use, which locks in a low top end) and that they were not necessary to achieve extraordinary bike use.

Regarding American roads being the most dangerous in the developed world – I would like to see how South Korea compares to the U.S.