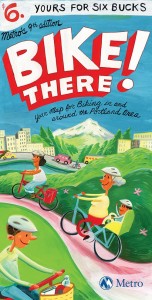 Cover of the new map.

The definitive regional bike map has been updated with lots of new routes and a significant price cut.

Metro’s Bike There! map, published since 1982, will release its ninth edition next month in the first update since 2010. There’s a lot to keep up with: the number of mapped bike routes in the Oregon side of the Portland metro area has shot up 71 percent since 2010.

Also added to the new edition of the map, according to Metro (our regional government): “popular recreational off-road destinations where [users] can enjoy the area’s natural beauty.”

The Bike There! map is respected for being so comprehensive — 56 cities are included — and for its carefully color-coded legend that distinguishes between higher-stress and lower-stress routes.

It’s also waterproof, which is more than you can say for an iPhone.

The other big change to the ninth edition, though, is a sign of the times: the map’s retail price is down from $9 to $6. That surely reflects the number of people who don’t bother with paper maps these days. (A scroll-and-zoom version of the Bike There map is also available free on the web, and it looks great on my own mobile screen.) 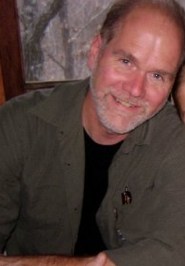 One solemn note: the ninth edition of the map is dedicated to one of the people who made it possible.

Metro staff and Council have dedicated the 9th edition to beloved long-time Metro employee and avid bike rider Mark Bosworth. Mark, a principal geographic information systems analyst, brought his love and knowledge of riding to Bike There! beginning in 1991 and was integral in creating a map that relied heavily on GIS data, but remained practical for all types of bike riders. Mark was last seen in Riddle, Oregon, on September 16, 2011, during Cycle Oregon. His whereabouts are unknown.

The Bosworth family and friends continue Mark’s love of cycling by supporting the Mark Bosworth Fund, which sponsors first-time riders in the week-long Cycle Oregon ride. Scholarship winners are announced each year on Mark’s birthday, April 19, with this year’s winners announced this past Sunday, on what would have been his 58th birthday.

The winners of this year’s Mark Bosworth Fund scholarship to Cycle Oregon are Monique Ybarra, Emily Meagher, and Chris and Jenn Basham. Learn more about them at MarkBosworthFund.org.

The Bike There! map goes on sale May 25 at local retail outlets, bookstores and the many community events this summer where Metro will have a table.

When was the data last updated?

Some odd stuff in S. Tabor, Division is still red til 68th where the old bike lane begins, and there is no mention of the lane uphill on 60th.

The downloadable KMZ file was last updated in September, which should have captured those changes.

It is obvious to me that the on-line map is still the old one. I am guessing they will update it when the official map goes retail. I know 62nd, from the MAX to Mount Tabor park was going to be added by the cartographer and is still missing. I’m sure they got lots of community feedback from all over the place.

Indeed! You found our online beta version we are testing that’s currently using older data and an older design. We are busy preparing the new files for the printer and will be updating the online map soon.

The digital version will be updated quarterly starting Bike Month 2015 and is designed to work well on mobile devices.

No true platinum bike city would even charge for a map.

The city actually doesn’t; it gives its (less durable but more detailed) maps away for free. So Portlanders, at least, have a choice of products.

thanks for noting that, Michael.
The free PBoT print maps are also online as pdfs: http://www.portlandoregon.gov/transportation/39402

And a note to the Policy Members at METRO…please consider adding the major bikeway facilities in Vancouver on the electronic version…since Oregonians do ride across the bridges (do other Oregon maps for drivers end at the border?), the digital map info exists, plus its just a nice thing to do as both sides of the river work on RTAC and other transportation efforts.

It needs to be updated. The bike lanes end on BH Highway in Raleigh Hills just west of the Fanno Creek culvert, not east. It oddly ends right by a new shoe store. Also, by late May, all of SW Oleson Road will have bike lanes.

Will the new ped/bike lanes on the Tilicum Xing bridge (which opens on 12 September this year) be included? I assume the new MAX & streetcar lines will be noted on it as well.

Haven’t seen the new edition, but I have the 2007 edition, and at home, refer to it frequently. All the streets labeled with their names, is very helpful. I leave the map out, unfolded, so no wear and tear on the folds, but the moisture resistant coating still helps keeping it from getting dirty with repeated handling. I’d say it’s good value for the six bucks.