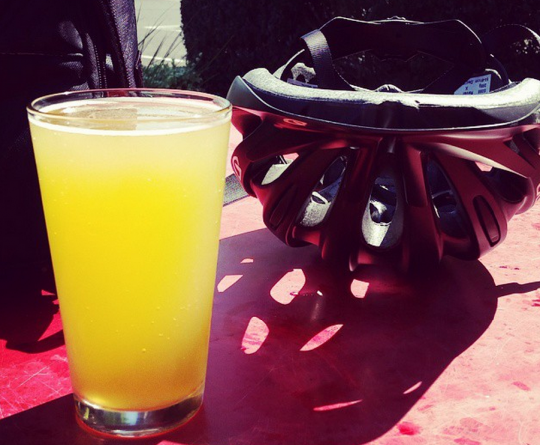 Hard to argue with.
(Photo from Yuriy Mikitchenko via Instagram)

One of the best things I did when I started writing for BikePortland a couple years ago was to use Tweetdeck to create a live feed of people in the Portland area who use the word “bike” or “bicycle” on their social media.

A day like Saturday really lights that list up. Here’s a sampling, roughly in chronological order through the day.

We bike to eat shit-we bike to trucks to haul shit pic.twitter.com/qftNUDmPYq

Talk me out of asking an ex to go on a bike ride with me.

#Portland where even the bikes have bike racks.

Well, now I get to bike to the Hollywood Farmer's Market on a gloriously sunny morning.

Biking in the sun + green lights all the way up Williams = it's going to be a good summer.

My last bike ride with Robyn Woodman at Firebrand before she leaves for Europe!

Such a beautiful day in #PDX to enjoy a beer after a bike ride. pic.twitter.com/peERLEnkar

I got the Job at the Airport hahaha. Now I gotta figure out transportation. Maybe Bike and Max will work out Lol

Had a nice bike ride today.

I went on a 3 mile bike ride downtown so proud of myself :'))

New bike! Still getting used to the road bike but just went out for a few hours today and really loved it. Alpe d'Huez will be a piece of cake by July! Robin thought a slo-mo would be funny… #newbike #trek #cycling #roadbike #tdf2015 #newbie #slomo #fitness #alpedhuez #training #tourdefrance

That ride was pretty good/easy guess I'm going to be one of those bike people now.

Yesterday’s weather was lovely. Went for a nice ride along the Springwater Corridor.

Even the mayor and his wife went for a bike ride yesterday! Was it the sunny day? Was it a response to the #notplatinum petition? I don’t know or care; I just like to see people out there riding!

That last one was my favorite too.

My daughter is visiting from Colorado. We all rode our bikes to dinner last night, and then rode somewhere else for dessert. It really felt like summer, biking home after 9:00. Just perfect!

After a week of #nobikeyuckiness this last week got out and went Food carting and had some delicious chicken dishes – Ramen, Rice and Soup plus a delicious froyo sundae!

Gonna have to add a #Foodcartbiking tag to my social media!!!

I would like to share a personal story about me finishing up an idea that I had in building a custom bicycle. I am calling the article Art Therapy: “My Self Propelled Dream Machine”. If you can find a moment to read my article, that would be grand! Also note that this post is in an International Cycling Publication so I hope to get a lot to eye to see me before, during and after life change. I know that I have sent out something like this before but not in Cycling Perspective.

Okay enough said; here is a link to my story and bike build.

it was a great weekend https://instagram.com/p/1qs20KxZTL

The thinking, “Perhaps a congestion charge on freeways and bridges in/out of the city peak hours,” a regular recently posted, I’d argue could become counter-productive several ways. Portland’s model of urban transport should continue to inspire and teach visitors/residents during “off-peak hours” when most US cities continue gridlocked chaos.

As for new bike pathways supposedly not measuring up to other US cities, I’d argue are mostly recreational trails that do NOT succeed in their urban environs as well as Portland. This unfortunately is the off-road biker mindset: Bicyles are recreation, NOT an essential mode of urban/suburban travel. IOW, recreation is more important than the essentials.

Coming soon: Sowa and Selwa westside bridges and pathways added to Bridge Pedal. It doesn’t get more Worldclass than that. How many
off-roaders make that ride? Answer: a smallish percentage?
Sorry if this seems a rude complaint, again, but I’ve had it with rudely fast bikers also putting safety lower on their list of priorities.
A forest Preserve should preserve its nature, not ours.

(still waiting on an official review of Plan B for Bertha
recently submitted to city, state and federal agencies)

Wells, this is really confusing. Might I suggest limited your posts to a couple of ideas at a time?

I disagree, Wells. I think the myopic focus on cycling ONLY as transportation is a BIG part of what’s holding Portland back. This is why cycling doesn’t have broad enough support in Portland to gain political traction to fund the big improvements needed to take things to the next level.

I say this having recently moved from Portland to Minneapolis – which has several times the density of recreational bike paths as the Portland area. The density is sufficient to make them actually useful for transportation as well as recreation – often, they are really a good way to get from one place to another, especially for longer commutes (though they do still impose beg-button delays at too many arterial crossings).

But not only that, having more bike paths gets more people out biking, and – this is really, really important – builds a broader base of support for biking. Agencies in the Twin Cities are confidently spending tens of millions of dollars this year alone to improve bike infrastructure — because they know they have the political support to do it. And in the Portland area they do not. I’m beginning to think that this is also reflected to some degree in the much higher degree of hostility towards cyclists seen in both the media and in drivers on the road, in Portland compared with MSP.

Efforts to promote transportation cycling in Portland have been successful (at least to a point), and have made Portland solidly #1 in transportation cycling. But it is not #1 in cycling overall: Minnesota is the #1 cycling state per capita, and Oregon is NOT. I think the friendliness of the infrastructure to casual cyclists is a big part of that. Bike lanes are nice for more enthusiastic and confident riders like myself, and those who ride exclusively for transportation, but they are only part of the picture. Especially if you ask the broader population whose support you need (and do not have). A few years ago I had a co-worker who had recently moved to Portland from Boulder and asked me, “Where are all the bike paths? In Boulder we have them all over the place! I thought Portland was supposed to be great for biking.”

And that brings me back to the original topic of how we all spent the weekend. I spent a good chunk of mine enjoying Portland’s few car-free bike paths, thank you very much. Didn’t feel like dodging speeding cars, especially since warm spring weather impairs a lot of drivers’ decision-making. And frankly, maybe I’m getting a little spoiled by all the wonderful trails in the Twin Cities. Saturday I rode the MAX line out to Gresham and biked all the way back to Hillsboro (40+ miles), taking in large stretches of the Gresham-Fairview and Springwater trails, and stopping at fun places like Cartlandia on the way (though of course I had to revert to roads once I hit the west side of the river). Yesterday I enjoyed a nice ride in the Gorge from McCord Creek to Cascade Locks and back. Also on no-car bike paths.

WTF is a sowa and a

What in Hade’s name is a sowa and a sellwa? No, I don’t actually want to know, thank you very much.

How fast do I ride? RUDELY FAST! oh yeah

Are you the same Wells who wrote this on the Portland Tribune’s page? “Mountain bikers exhibit callous disregard for the safety of pedestrians on both narrow trails and wide walkways. Forest Park should be considered a nature preserve, not a motocross playground.”

Saturday, my wife and I did a 28-mile round trip ride from our apartment to Kelly Point Park. Beautiful day for a ride.

All this talk about mountain biking finally inspired me to take my 9-year-old out on the trails. Of course, I had to drive 30 minutes west to Stub Stewart to do it, but we had a great time. We shared the trail with walkers, bikers, and even a nice lady on horseback, none of whom seemed to be frightened by our presence. Seems to me that all of the fuss about sharing trails is mostly unfounded.

Hear, hear.
–
I’ve hiked thousands of miles in the PNW since I moved here. Have yet to have anything resembling a “problem” with someone on a bike. I *have* been attacked by dogs three times, though. 🙂

I drove out to Post Canyon in Hood River to ride some amazing trails. Then Double Mountain afterwards for some post-ride refreshments and sandwiches.

We did a lovely ride across the river from downtown Vancouver out to Frenchman’s Bar park and out to the end of Old River Road. On the way back, we saw and waved at a friend zipping along on his bike. Later that evening, we saw him at the ‘Inspired to Ride’ screening of the film made about last year’s TransAm Race. He had just finished a 190 mile ride since he’s training for this year’s TransAm Race. The movie was fantastic and the Portland crowd was off-the-hook enthusiastic! Yes, welcome Summer!

Lewis and Clark State Park to Cascade Locks and back again. Sixty-three beautiful miles and, you betcha, we were wearing Lycra.