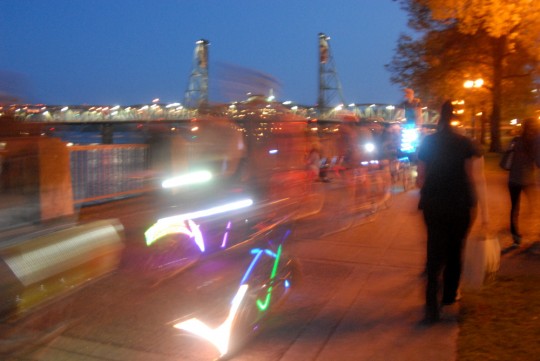 Some feelings can only be felt.
(Photos: M.Andersen/BikePortland)

Spending a week writing and thinking a lot about frustrating news will wear you down. So by 7 p.m. on Friday night, I thought the last thing I wanted to do was ride downtown for the evening ride I’d said I’d attend.

In other words, I came pretty close to a pretty dumb decision.

Friday night was one of the first of something terrific: a new series of rides organized by Nathan Jones, owner of the 18-month-old Foster Road shop Ride Yr Bike and the founder of the Trans Am Bike Race.

The cross-country race, which starts in Astoria in early June, will be explored in a documentary this evening at the Mission Theater.

As we spoke, the light was fading fast. Here’s Jones on the left. 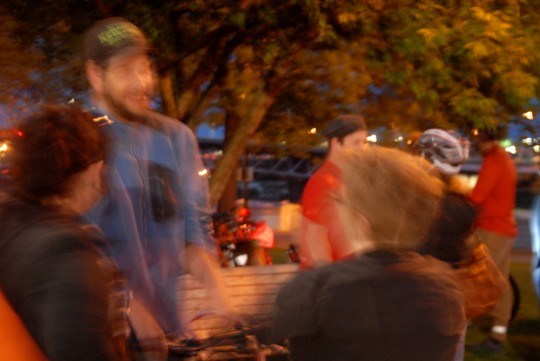 “I’m just trying to build stoke for Pedalpalooza,” he told me. He plans to organize rides all spring, building up to the launch of Portland’s annual bike festival in June, and then to start up again later in the summer after the festival wraps up.

As the sun dropped behind the West Hills, I hurried around to snap some other photos.

Friends, they were terrible. 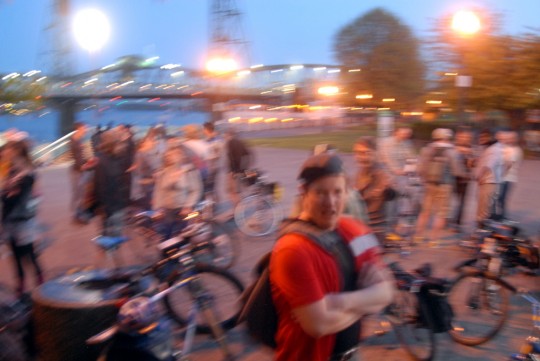 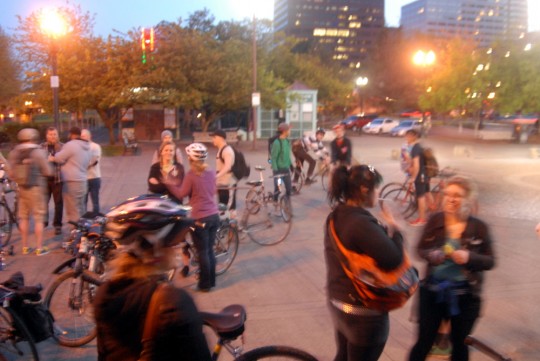 But I had come all the way downtown for one more post in a long week, and I was going to keep shooting. So I started talking to people. I saw my friend Terry Dublinski-Milton: 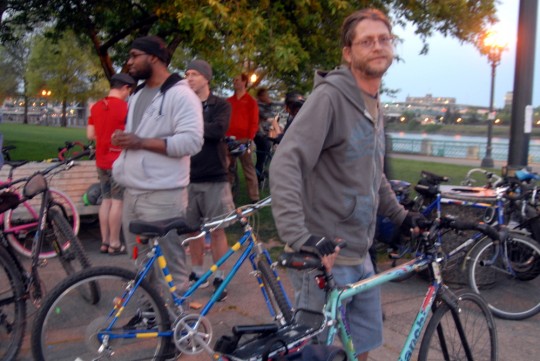 “I took a brain day today,” said Dublinski-Milton, who devotes much of his available time to neighborhood advocacy in Southeast Portland. “I just rode around. I didn’t think about anything.”

Dublinski-Milton said he thought it had been an “interesting week, but a good week.” “I think now everyone’s fingers are pointing to one building,” he said, nodding toward City Hall.

Not everyone started conversations about politics, though. Branden Shelby was glad to show off his front-mounted wine holder. 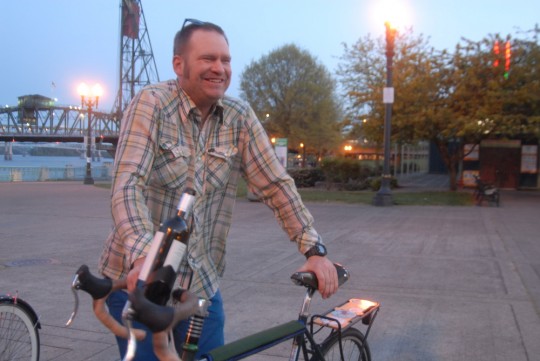 Shelby’s friends noted that it accompanies not one but two bottle holders lower on his frame.

I met Laurel Stauske and Chris Blanco, who joked that they weren’t here to join the ride. 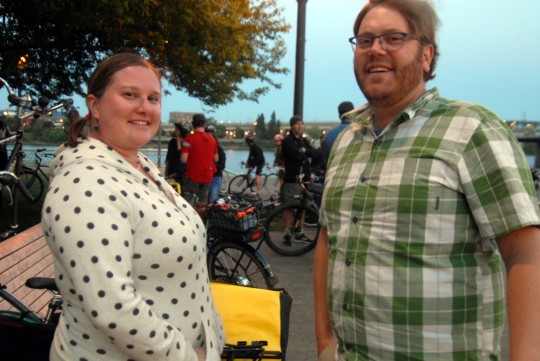 I met Xavier Garcia, Serita Wiley and Miguel Chavez, who said they’d just been biking along the waterfront when they heard a ride was leaving from the fountain at 8. 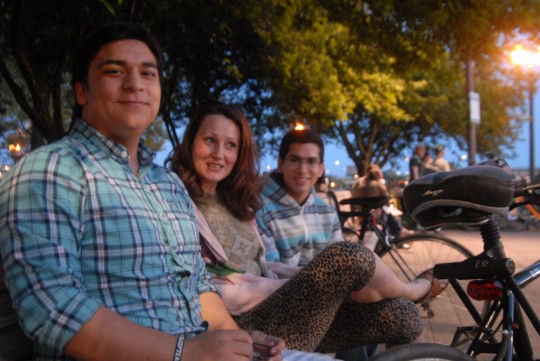 “A dude was just walking around telling people, so we came,” Wiley asked. “Is this ride famous?”

“Is there a calendar for these or something?” she said. I told her about BikePortland’s Weekend Event Guide and the Shift calendar, but that I thought most rides these days started on Facebook. 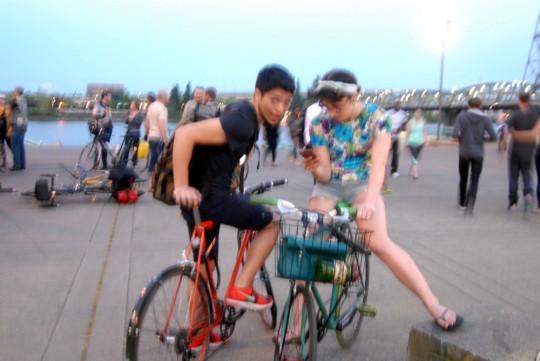 I met Lori Sills (left) and a Sprockette who gave her name only as “Agent Riot”: 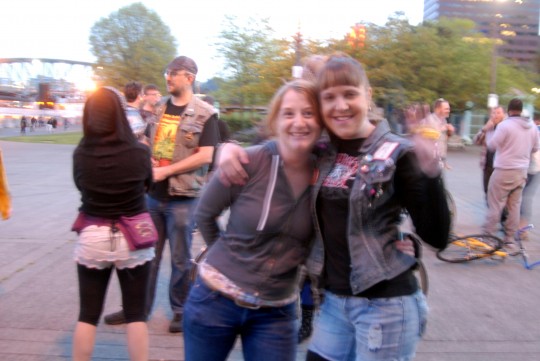 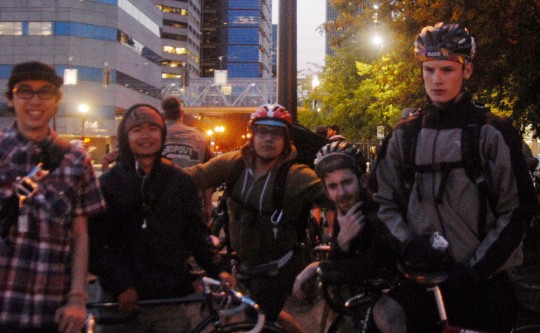 Then it was time to go and we headed north through Waterfront Park. There were about 40 of us. 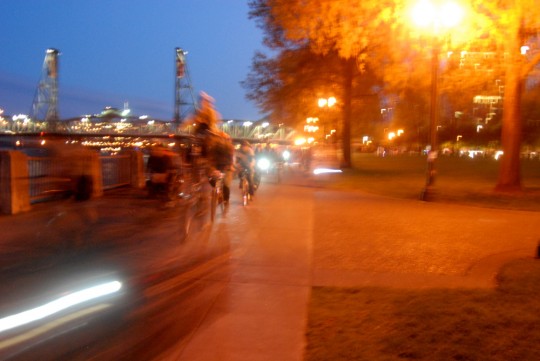 As we cruised under the Burnside Bridge, some riders let out hoots to hear the echoes, the way Portlanders always have and always will.

I was next to Dublinski-Milton, who I knew had been a biking advocate in Madison, Wisconsin, in the 1990s.

“People commuted,” he said. “But there was nothing like this culture.”

“Do you think that’s because of the Internet?” I asked.

On the Eastbank Esplanade I ran into Eric Iverson, who I’d met at the Rudolph ride in December. We talked about the overlapping Facebook groups that have become the core of Portland bike fun in the last few years, like the 71-member Grilled by Bike Club that hauls grills on their bikes and then uses them to prepare meals in the field.

The ride stopped at Plaid Pantry on Division Street to pick up drinks and snacks for what would be (for some riders, at least) a long night ahead. I ran into Dan Kaufman, the local videographer and activist who’s working on a plan for a continuous off-road bike trail down the Oregon coast. 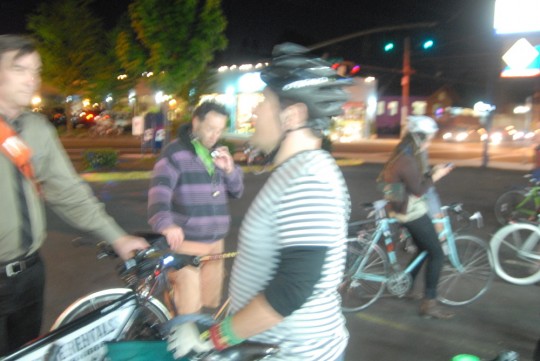 That’s Kaufman on the left. Obviously.

Beside us in the bike-lined mini-mart parking lot, a young man opened his car door with a question. “What’s all this?” he asked.

He repeated my words, smiling, with what I think was admiration.

Ted Buehler rolled up. Buehler was towing a bike trailer with a giant whiteboard on which he had been asking people to describe their problems with Portland bike infrastructure, then pose with a photograph at the site of the problem. Buehler pulled out his phone to show off a few of the shots.

“You’ll like this one,” Buehler said, pointing to a fat book sitting on the ground in one photo. “That is the MUTCD, open to the page with the solution.”

As the crew headed east on Clinton, I thought about how lucky I am to live where I do, to do what I do, and to be riding a bicycle with the people I was with, whether or not the photos were any good.

Whatever happens here in Portland, it’ll never be anything that won’t be improved by a slow roll with good people. See you at the next one.

This is fantastic michael! Took me back to the days when I used to get out on these rides. Love it. Vintage bikeportland coverage!

This is why a bike city cannot be measured by rankings and infrastructure alone.

And thanks Nathan for making it happen.

Thanks for the coverage y’all. See ya out in the streets again soon! 🙂

With all the issues we have been facing of late, we should not forget to just ride.

Is the Shift calendar not cool anymore? It seems like a lot of big group rides are not posting to Shift (and like you noted, sticking with Facebook).

“Ted Buehler rolled up. Buehler was towing a bike trailer with a giant whiteboard on which he had been asking people to describe their problems with Portland bike infrastructure, then pose with a photograph at the site of the problem.” Oh, Ted. That’s awesome.

Speaking to power in a format they can understand. Good show, Ted!

It’s so easy to get caught up in things and forget what it’s all for.

Fantastic. I’m looking forward to joining in on some rides like this.

Great write-up! I wish I could have attended. Will try to hit up the next one!