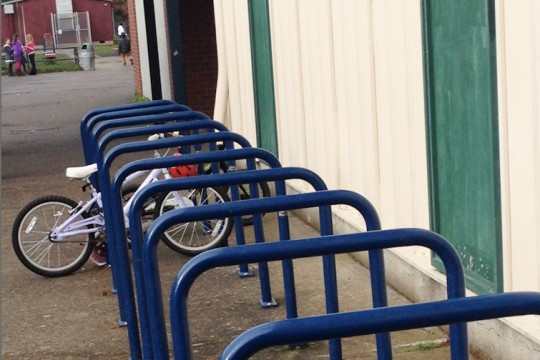 If you want a foot-friendly family neighborhood in Southwest, it’s hard to beat Hillsdale or Hayhurst.

Though neither area can touch the schools of central Northeast and Southeast Portland — at Beaumont Middle School this fall, fully 72 percent of students reported biking, walking or skating to school — three Portland Public Schools in the middle of Southwest Portland led the quadrant in active transportation, according to a new Safe Routes to Schools report circulated this month.

Hayhurst/Odyssey School (K-8) posted 32 percent combined biking, walking and skating last fall. Rieke Elementary in the heart of Hillsdale, followed with 31 percent, and Robert Gray Middle School (6-8), a bit to the north, reported 29 percent. You can click on the map pins below for more information about each school.

Sylvan Middle School, which has two locations on different sides of U.S. 26, had the city’s lowest recorded active transportation rates, with just 6 percent of students there saying they biked, walked or skated. However, those schools had a very high busing rate: 71 percent arrived at school that way.

As we reported a year ago, 2014 was the first year of a three-year grant that has expanded Portland’s popular Safe Routes to School program to middle schools. The program helps students in the Portland Public, David Douglas and Parkrose school districts learn about active transportation.

The Safe Routes program is voluntary at the school level. Some schools don’t currently take part, so their biking and walking figures aren’t tracked by the city. Figures here are based on 3,032 surveys returned from families with children in the district.

Citywide, the addition of middle schools to the surveys last spring seems to have driven down the percentage of students at Safe Routes schools who arrive by private car. But the overall rate of walking, biking and skating across all Safe Routes schools is (like most biking-related statistics in Portland) essentially unchanged since at least 2011:

That said, several of the middle schools where Safe Routes launched saw some very encouraging jumps in active transportation between spring 2014 (their baseline) and fall 2014. We’ll be eager to see if this trend holds, and crossing our fingers for Robert Gray to gradually become Portland’s next Beaumont.

We’ll be here in Southwest all week! And join us Friday afternoon for a BikePortland Get Together and social hour at the Lucky Labrador Public House in Multnomah Village (7675 SW Capitol Hwy) from 4:00 – 6:30pm.

Oh ‘good grief!?’ …if parents did not have enough issues to consider when picking a school…now there is a “rack gap”! 😉

It doesn’t help that PPS closed the well-functioning Smith School in the Ashcreek neighborhood. Those kids have to travel a long way to get to the nearby public schools.

only as good as the infra in an area if you ask me. if a school is off a busy street hmmmm worries me a lot, seems some burbs kids grow up auto dependent.

O.k. We have steep hills and almost no sidewalks around our schools. Not really conducive to biking and walking! I run a bike train from Hillsdale to Hayhurst in the less rainy season once a week. But most of the time it’s just my kids participating. Why? We have to go for a little bit on Vermont between 30th and 35th which is still pretty scary for even seasoned bike commuters going westbound (there is a nice new sidewalk and bikelane eastbound). It’s also 2 miles to school and includes steep Vermont hill on the way back (though not as steep going up Pendleton). But I’m proud that Hayhurst is leading the pack, as the school includes not just the neighborhood school, but the K-8 magnet program Odyssey as well. That means half of school kids come from outside the Hayhurs district and are further away from the school.

Joe
only as good as the infra in an area if you ask me. if a school is off a busy street hmmmm worries me a lot, seems some burbs kids grow up auto dependent.
Recommended 0

Dave so true man, so in Wilsonville seems ppl like to throw glass and other things into the bike lane have lived there for 8 years and have noticed huge diffrence from say PDX, but if you ride on the sidewalk safely and I mean ppl that realy still don’t feel safe with cars zipping by at high speeds the police seem to be aint-bike in the city ticketing and harassing ppl that ride even if u look homeless but really not. burb life is rather one sided since most really think driving is a form of class there. :/

A section of two lanes of Wilsonville’s Town Center Loop East were removed in 2014 order to make much wider bike lanes.

The principal of Hillsdale’s Rober Gray Middle School fell and broke an arm in recent years when walking on the public trail on SW 25th Ave; it has taken Oregon representative Jennifer Williamson to take the issue to PBOT. An Oregon rep just to help make a better path / culvert / bridge!

Portland city council doesn’t require anyone to live and represent any certain areas of Portland. Follow the money.

My Kids are at Reike and outside of the horrifyingly **** and down right ridiculously entitled Principal and some of the teachers (which is why I’m looking to buy in SE Portland soon) … its really Not a very bike accessible school.
I would never let my kids ride to it and we live less than a half mile from it! The major street crossings near it Capitol hwy, Sunset blvd, Terwilliger and SW Bertha blvd are all high speed roads that drivers have zero respect for pedestrian or people on bikes.
I pick up my kids a couple days a week on my Surly Big Dummy and it is the most nerve racking 5 minutes of riding I do all day getting out of the school parking lot and onto sunset blvd, then all the idiots that pass me (while I’m taking the lane doing 20mph with 2 kids on back) on the blind curves of sunset blvd.

I wouldn’t wish that on my worst enemy… which just happens to be the principal of Reike!

BTW I have been right hooked on purpose and yelled even jumped on night because the guy pushed me off the road and I confronted him, but the police will not listen to the ppl along with the fact of keeping the streets really safe for all modes of transport. * most drive in the city and stores are within eazy 2 miles, I’ve also seen bike racks blocked at major stores, som lack proper lock spots, ohhh but the put these green lanes in and its a false sence of hey ur safe go ahead ride in it..

Adult-sized staples at an elementary school looks kind of funny. Is the rack supposed to be twice as tall as the bike?

Good point…perhaps it would be better to use a non flange rack (for new construction)…but the CoP bike standards do not allow this outright. Perhaps this is an opportunity for a local bike rack maker to make “mini me” staples for elementary schools?

The Jewish cemetery on SW Canyon Lane has the gates locked on certain hours of the day.