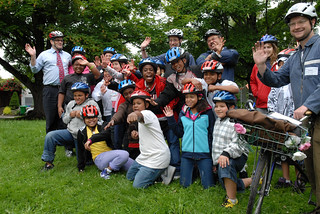 Elementary schools already get bike education and
improvements from the Safe Routes to School program.
(Photo by J.Maus/BikePortland)

After seeing substantial success at getting more elementary schoolers to bike and walk to class, the City of Portland’s Safe Routes to School program is moving up the age ladder.

“We’ve done a lot of work to educate second graders, fourth graders, fifth graders, about walking and biking to school,” Graff explained. “Then the student heads to middle school and it’s kind of like, ‘Good luck!'”

Graff said there’s reason to think a focus on middle school will help reach families who the elementary programs fail to woo.

“We just know from our work with adults that when people have a new job, there’s a transition period, and there’s an ability to influence how people get around,” he said.

“There are fewer middle schools and they tend to be further away,” he said.

Graff said 14 middle schools sit inside city limits. The new program, which began in October, will aim for some level of partnership with each before the end of the grant period in 2016, but will focus mostly on a handful. He mentioned Robert Gray, Hosford, Beach and Da Vinci as possible starter programs.

“The strategy at the elementary school front, which we’ll be trying to replicate at the middle school, is to get a few strong partners and try to do some really cool stuff that people want to do at their school,” he said.

The city’s work with elementary schools has included bike-to-school days, bike racks and physical safety improvements to the surrounding streets. It also pays for bike safety professionals to take elementary pupils on instructional rides, something Graff said the $150,000 grant isn’t big enough to provide for.

If it works at shifting behavior, Portland’s middle school program could become a model for Safe Routes to School programs across the country.

“With the elementary school program, a lot of our work is targeted toward parents,” Graff said. “As we move into middle schools and high schools, it’s kind of recalibrating our message to the student body itself.”

If you’d like to get a particular middle school associated with the new program, contact Graff’s colleague Janis McDonald: janis.mcdonald@portlandoregon.gov or 503-823-5358.

“Then the student heads to middle school and it’s kind of like, ‘Good luck!'” This sums up the middle school experience in Portland with unintended accuracy.