Youth Bike Summit will bring Portlanders to Seattle next week 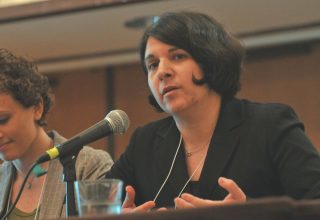 Other Portlanders will be attending the conference, which costs $35 for people under 24 and $65 for older people. Most events are on Saturday, Feb. 14. Registration is still open if you’re interested.

The MYC was a driving force behind the creation of the Portland Public Schools YouthPass program that use money that would otherwise be spent on yellow-bus service to give free public transit passes to high schoolers in school districts that opt in. Since state funding was eliminated in 2011, the commission has been pushing for the program to be locally funded. 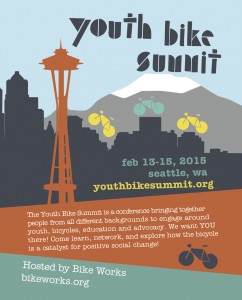 This year, the Bicycle Transportation Alliance, OPAL Environmental Justice Oregon and other groups successfully argued for a new statewide YouthPass program to be recommended to Oregon’s legislature by a broad-based coalition of transportation interests. It remains to be seen whether legislators will agree.

Youth Bike Summit organizer Pasqualina Azzarello says while the summit focuses on getting young people to ride, the real value is for the grown-ups. “One thing I’ve learned through this work, is just how important it is for the adults who attend – and how learning, engaging, and including youth perspectives can be incredibly effective when it comes to growing, strengthening, and bettering advocacy efforts on the local and national scale and within the industry itself.”

Azzarello was one of three leaders in the youth cycling movement to be invited to speak at the annual Bicycle Leadership Conference to a room full of bike industry executives. Why? Because sales statistics show a decline in children’s bicycle sales over the past several years.

This event has grown by leaps and bounds since the idea for it was hatched by Azzarello and two teenagers with Recycle-A-Bicycle, a Brooklyn-based non-profit. They were traveling home on a bus from the National Bike Summit in Washington D.C. The 2014 event had 484 attendees from 27 states and four countries, making the Youth Bike Summit one of the largest such gatherings in the country.

“We’ve seen this movement build momentum and grow,” Azzarello shared with us via email last week, “And we’re excited by the resources and new outreach potential of having the YBS take place in the Northwest.”

Learn more, browse the full agenda, and register at YouthBikeSummit.org.

Correction 2:50 pm: An earlier version of this post incorrectly stated the number of Portlander-led panels.

Congratulations, Pasqualina and BikeWorks for bringing the Youth Bike Summit to the west coast.

Thanks so much, Alison! We’re excited!

Super excited to go to the Youth Bike Summit. We have a great group going – not only PBOT staff but also staff from CCC, BTA and MYC. AND youth from Cesar Chavez school and MYC!