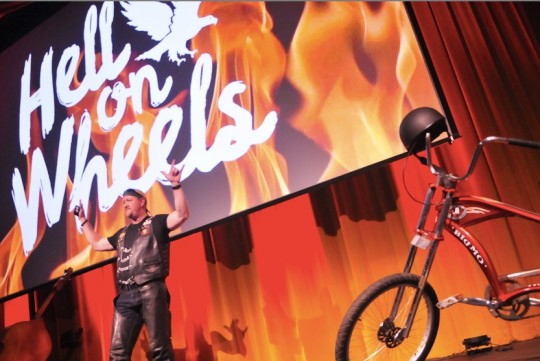 Cycle Oregon kicked off their 2015 season with a big party at the Portland Art Museum tonight. Hundreds turned out for the bike lovers’ version of an Apple product launch to learn where the 28th edition of the ride will venture this year. 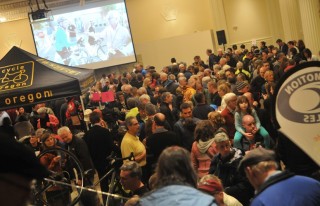 The big reveal was made in grand fashion when Ride Director Steve Schulz rode onto stage on a chopper bike in full motorcycle gang attire – leather chaps and all — as the stage lit up in flames while “Hell on Wheels” was emblazoned on the screen.

Schulz went on to describe what looks to be another magnificent route full of the best riding Oregon has to offer. This year’s seven-day Week Ride will include overnights in Baker City, Farewell Bend (Idaho), Cambridge (Idaho), Halfway, Wallowa Lake, and La Grande. 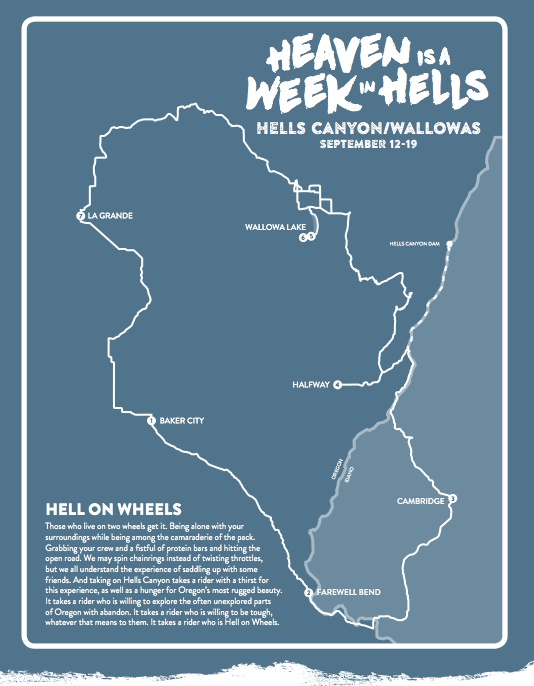 And here’s how each day breaks down…

And a few gratuitous scenes from the roads the lucky 2,200 or so participants will be riding on… 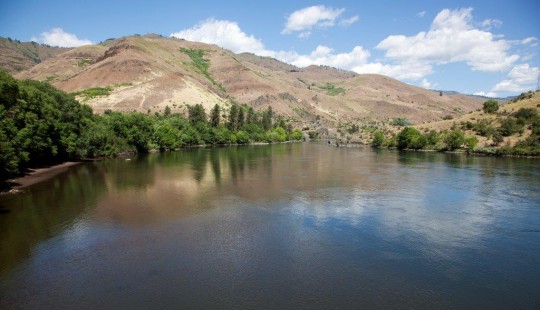 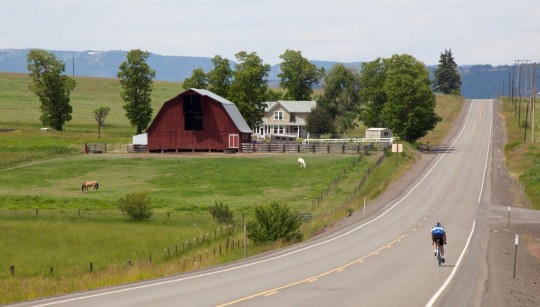 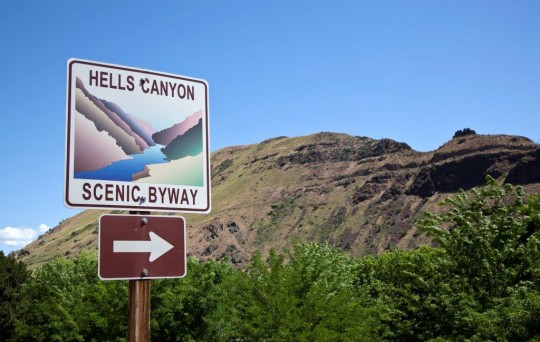 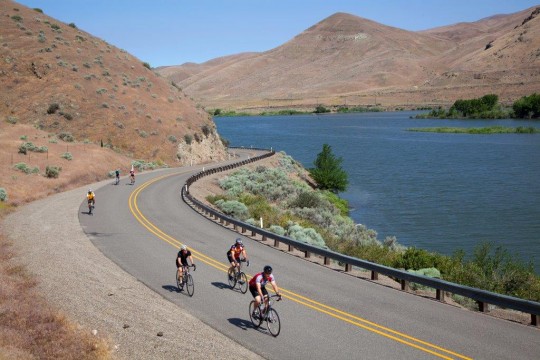 The theme of this year’s ride is a play on the crossover between motorcycle riders and lycra lovers with slogans like “Hell-Bent for Lycra,” and “Live to Ride, Ride to Give.” There’s even a rumor that tattoo artists will be brought into camp for those looking for a permanent souvenir. 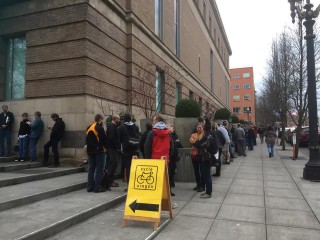 People waited hours for a chance at early registration.
(Photo by Cycle Oregon)

Hours before the announcement, eager fans of the ride lined up outside the Art Museum in hopes of securing early-bird registration status. Inside there was live music, food, drinks, and a product expo that included booths from Eugene-based bike maker Co-Motion Cycles and longtime ride sponsor Bike Gallery.

The announcement was also live-streamed on the Cycle Oregon website, where an estimated 5,000 people logged on to see the announcement. The destination of the ride is a closely held secret and for thousands of Cycle Oregon participants tonight marked the formal start of their training.

“This year we wanted to visit one of our favorite parts of the state,” said Cycle Oregon Ride Director Steve Schulz via a statement. “We haven’t been through Hells Canyon since 2003 and wanted to bring folks back to this natural wonder.”

Schulz said the route will ofer a “perfect blend of climbing and cruising” and will expose riders to the “amazing beauty” of far northeast Oregon and western Idaho (Hells Canyon straddles both states). 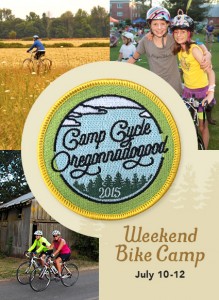 “We’ll take riders through the deepest gorge in North America, and then bring them up into the Wallowa Mountains. The views are breathtaking, the communities are the friendliest around, and the riding is superb. We can’t wait until September.”

Registration for the Week Ride begins tomorrow (2/5) at 12 noon. The price of admission is $975. Full info here.

The Weekend Bike Camp, a tamer, more family-friendly Cycle Oregon option (set for July 10-12) will set up its base camp from Western Oregon University in Monmouth. Riders can choose between different supported loop routes each day and there’s a kid’s camp for the little ones. The weekend ride is $199 for adults, $99 for kids 7-17 and children under 6 ride free. More info on that event here.

Another big announcement tonight came from Cycle Oregon Executive Director Alison Graves. She said the organization has awarded another $50,000 “signature grant” toward ongoing planning of the Salmonberry Corridor Trail. “We want to make that route happen as soon as possible,” Graves said.

Stay tuned for more Cycle Oregon coverage throughout the year. We’re proud (and excited!) to be an official media partner this year. I’ll be out on the roads covering both of these events, as well as bringing you a more in-depth look at Cycle Oregon, its role in our state’s cycling ecosystem, and the bigger picture of how their work — and cycle tourism in general — is impacting the economies of rural Oregon.

That route is almost the same as the 2008 route I did, which was gorgeous, fun, and a bit brutal with all the climbing. Here are my photos from the 2008 trip for what you have to look forward to this year.

What did I tell you Jonathan… Hells Canyon… I just got the wrong “Bend”.

On behalf of the Monmouth/Independence area, we’re excited to roll out the red carpet for Cycle Oregon and show off some of the best biking that Oregon has to offer, right in our own backyard. You’ll be hearing lot more biking news coming out of Monmouth and Independence, so stay tuned.

“…the organization has awarded another $50,000 “signature grant” toward ongoing planning of the Salmonberry Corridor Trail. “We want to make that route happen as soon as possible,” Graves said.”

eli bishop
“…the organization has awarded another $50,000 “signature grant” toward ongoing planning of the Salmonberry Corridor Trail. “We want to make that route happen as soon as possible,” Graves said.”
YAAAAAAAYYYYY!
Recommended 2

Amen, good to hear of more $ going that way.

I take offense to the use of “gang attire” to describe what he is wearing. As someone with friends in MC’s across the country, I would describe that as general contactor, lawyer, dentist, or mid-life crisis attire.

scott
I take offense to the use of “gang attire” to describe what he is wearing. As someone with friends in MC’s across the country, I would describe that as general contactor, lawyer, dentist, or mid-life crisis attire.

This is the same route as Cycle Oregon 16 in 2003. Hopefully it will be warmer & much less rain.

That is correct. Rain in Cambridge and Halfway as I recall, and not very warm. But it’s a great route. Look forward to doing it again.

Huge shout out to thank Jonathan of BikePortland.org for your great coverage. I am here in Santa Cruz, CA, inspired by what I read! Maybe I will get to Cycle Oregon for hell on wheels this year.

They certainly seem to have improved the registration process, or maybe it was giving away the 500 early registrations that eased stress on the system, but I logged in at 12:01 and was registered by 12:05 with no glitches. This is going to be a great ride, looking forward to seeing you on it again Jonathan! I’ve vowed to be in better climbing shape this year. 🙂

OMG. I moved here in 2000. Two things I have not done that I have really wanted to do. 1. Cycle Oregon. 2. Visit Hells Canyon. I registered. I can’t wait. How do I ensure I have enough juice in my cameras for each day?

Pfft. Everyone knows Hell is in Michigan. 😉