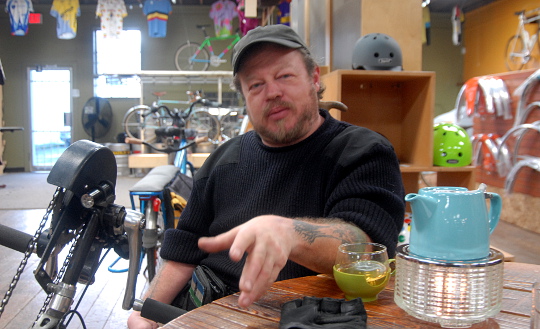 David Griffiths has developed a concise and compelling way of talking and thinking about bicycles as a metaphor for life.
(Photos: M.Andersen/BikePortland)

For years, as deeply as he loved language, David Griffiths thought social media wasn’t for him.

Then four weeks ago, on the day after Christmas, Griffiths decided to give Facebook a try. He posted a photo of himself in his favorite Portland hangout — Hollywood bike shop/pub Velo Cult — and started writing.

As they always have for him, the thoughts started coming.

“Cycling doesn’t give me power or freedom,” he wrote on the site two weeks later. “It reminds me that I have as much power and freedom as I am willing to claim and able to use, and that I can have these things in abundance without taking them away from anyone else. Cycling is a way of exercising my power and freedom along with my body and mind. Cycling is essential to my ongoing healing process, not because it makes me better than I was, but because it reminds me that I’m already better than I thought I was.”

It was a summary of the way of thinking — the philosophy of life — that Griffiths has worked out during long hours in the saddle. And characteristically, he decided that his philosophy needed a name.

“As much as I hate labels and categories and ‘isms,’ if ‘cyclist’ is the ‘ist,’ there needs to be an ‘ism’ to go with that,” Griffiths, 45, said in an interview last week. “‘Cyclism’ doesn’t quite do it.”

So Griffiths thought back to the experience that drew him to biking and to Portland, back in 2010: a trip down from Olympia to take part in one of the first few Sunday Parkways. 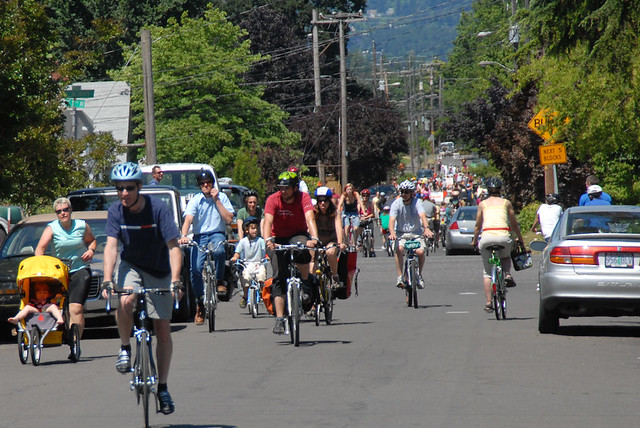 At the time, the festival was one of the first in the United States to be modeled after the weekly ciclovías of Colombia. It left a deep mark on Griffiths.

“Being able to move freely and safely through that space, under my own power, surrounded by thousands of other self-powered humans, was one of the most amazing things I’ve ever experienced,” he marveled the following month in a comment on the city’s website. “We need this in Olympia.”

Six years later, two years after he relocated to Portland, Griffiths recalls that Sunday morning as the time that “everything just clicked.”

“I wanted to learn as much as I could about the history, the origins,” Griffiths said. “So I started reading about the ciclovía in Bogota, and learning about the history of that and how it’s really transformed not just Bogota but they’re doing it now in all the major cities in Colombia and it’s been part of this huge transformation that Colombia has been through in the last 30 years.” 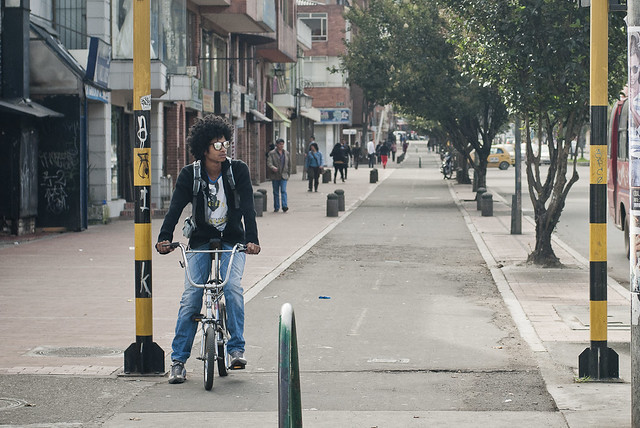 Ciclovía: the word literally means “bike way,” and can refer to a path as well as an event. But Griffiths began to turn the idea around: it could just as easily, he decided, represent the “way of the bike.” The way of the wheel.

The way of life, in other words, for people with as much power and freedom as they are willing to claim.

And that was how Griffiths found a name for his philosophy.

“Someone whose path through life is the ciclovía is logically a ciclovista,” reasons Griffiths. “And if you’re a ciclovist, what you practice is ciclovism.”

Or, in the Spanish: ciclovismo.

Griffiths’ way with words, and the depth with which he’s captured the ideas behind them, is probably one of the two biggest reasons he’s been invited to speak next month at the 2015 World Bike Forum, which this year is being held in Medellín, Colombia.

The other reason is probably Griffith’s very impressive left forearm.

Or, to be more precise, it’s the way Griffiths’ left forearm got so impressive: 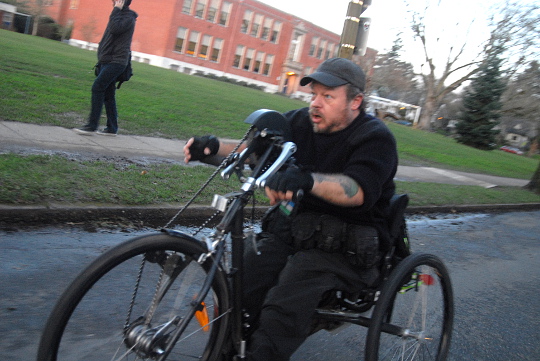 Griffiths was born with arthrogryposis, a neuromuscular condition that he estimates affects about 300,000 people worldwide.

“It causes muscle contractures and it causes imbalances in opposing muscle groups around your joints,” he explained. “So as your joints and as your muscles develop … what’s normal for your body actually causes the muscles to pull your joints out of alignment.”

That’s why Griffiths’ legs struggle to support him when he stands, and why his right thumb doesn’t quite grip the handle of his handcycle when he pushes it up a hill. 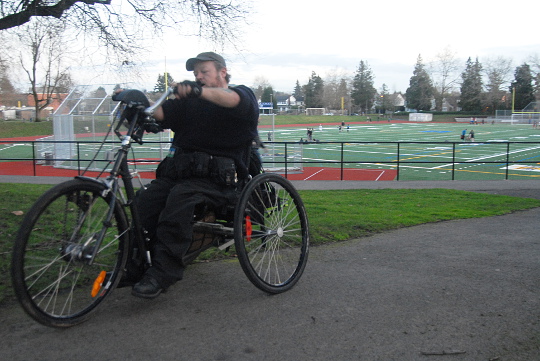 It’s also the reason that, after a decade getting around in wheelchairs, Griffiths was so excited to discover handcycles in 2007.

“The most exciting thing about this for me when I got it was, ‘Oh, this actually is what I thought a wheelchair would be.'”

“It sucks as a vehicle,” Griffiths said of traditional wheelchairs. “The little tiny castors in the front and the really short wheelbase. It’s really unstable on any kind of terrain that you might actually experience in the real world.”

“The most exciting thing about this for me when I got it was ‘Oh, this actually is what I thought a wheelchair would be.'”
— David Griffiths on handcycles

Handcycles have turned out to be everything Griffiths needed. He uses them inside and out. They let him transition almost as seamlessly as anyone — in some ways, more seamlessly — between moving around a room and whirring down a road.

Once, after a spell of homelessness in his 20s led him to Bellingham, Wash., Griffiths had what he now calls the “crazy notion” of becoming a lawyer, using his love of language to exercise the power of the newly passed Americans With Disabilities Act.

It didn’t work. Though he found work as a paralegal, no schools accepted him.

“I was just the wrong kind of person all the way around,” Griffiths said.

Griffiths currently works, unpaid, as a consultant and spokesman for the nontraditional bike company Different Spokes.

His other gig, right now, is fundraising. Griffiths is trying to raise $2,000 in donations, online and at a party at Velo Cult on Feb. 13, so he can accept the invitation of the World Bike Forum and speak there next month about his ideas about ciclovismo.

The theme of this year’s forum is “Cities for All.”

After the forum, Griffiths hopes to continue finding ways to share more of the thinking he’s been doing over the last seven years, and to keep exploring what it means to be a ciclovist.

“I also like the fact that ciclovist is cyclist with ‘love’ in the middle,” Griffiths said. “It’s like, love is at the heart of what we do.”

“It’s a little cheesy,” he added with a smile. “But it’s the kind of cheese that I think I’m comfortable with.” 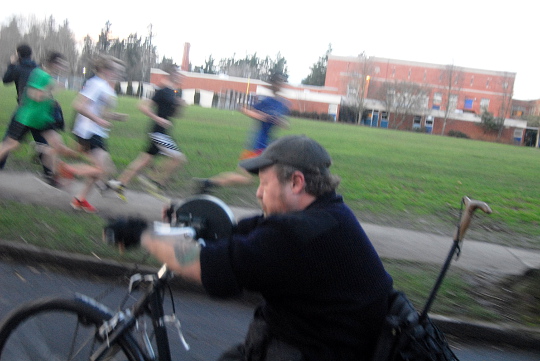 — You can read other Friday Profiles here.

“It reminds me that I have as much power and freedom as I am willing to claim and able to use, and that I can have these things in abundance without taking them away from anyone else.”

I especially like the last part. Ivan Illich would appreciate this way of thinking about getting around. Too bad ODOT only recognizes the kind of traffic that takes things away from others.

I think I saw this guy on N Williams last week….

Today is a monumental day as well as many others. I was able to add two new words to my dictionary that have never been added before and only spoken by very few, these words are Cyclovist which practice Cyclovism. Thank you David for these wonderful words and these beautiful thoughts.
David, I think you should write a book. All the great philosophers wrote books. You sir have such a flare with words and I think your thoughts should be saved for future generations of Cyclovist. Even if it is just a book of thoughts on Cyclovism that would be great for those of us with out the ability to put our beliefs and feelings into functional sentences.

More from Illich:
“People and motors do not move through the same kind of space. Auto-mobile people culturally constitute the commons on which they walk, and stay within the range of their feet at the self-limiting rhythm of their bodies. Vehicles tend to annihilate commons into unlimited thoroughfares. By transforming commons into resources for the production of passenger miles, vehicles take the use-value out of feet. They homogenize the landscape, make it non-transitable and then catapult people from point to point.”
http://backpalm.blogspot.com/2011/05/scarcity-and-construction-of-energy.html

dude was hauling going up Sandy one day awesome seeing him jamming!
bought him a beer at VC later that night 🙂