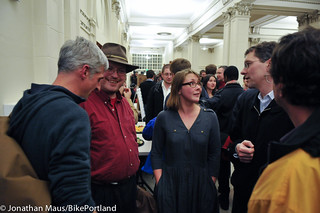 Some bikey questions are up for debate.
(Photo: J.Maus/BikePortland)

What do you do when a person in a car yields to you at an intersection for no reason?

How do you have a productive discussion with someone who isn’t excited about biking?

If you could get one bike-friendly person in Portland into public office, who would it be?

For the second year, we’ve dedicated an episode of our monthly podcast to answering questions that were, like these, submitted by readers and listeners. So producer Lillian Karabaic, Joathan and I put 20 minutes on my kitchen timer and answered as many as we could before the bell. The result is rapid-fire and fun.

After that lightning round, each of us reviewed the predictions we made for 2014 during last year’s question show (some of us did, ahem, much better than others) and each of us makes a new prediction for 2015.

This episode was taped a few days before New Year’s, which explains a couple of the time-sensitive references here.

Next month, we’ll be joined by Community Cycling Center CEO Mychal Tetteh for a three-way conversation about how to bring new people into the bike advocacy world. Stay tuned.

The whole cars yielding to bikes inappropriately needs some kind of PSA campaign. Its just rife with confusion now and creates a damned if you do, damned if you don’t situation. I don’t see cyclists being able to raise the education level by just refusing to take the offered right of way. And I see lots of frustration all around.