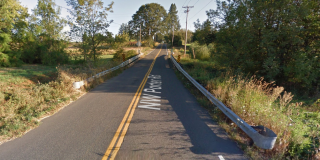 Washington County has opted to spend $125,000 to $175,000 on temporary repairs to its least sturdy bridge rather than close it to auto traffic.

As we wrote last month, the bridge on Porter Road northeast of Forest Grove is significant for biking because it’s part of the Tualatin Valley Scenic Bikeway and might also become part of a “Council Creek Regional Trail” that would eventually create a low-stress link between Hillsboro and Banks.

It’s also significant for driving because it currently carries an estimated 1,100 motor vehicles per day.

Last month, Washington County Operations & Maintenance Division Manager Dave Schamp described a repair for the failing bridge as “kicking the can down the road.” But on Dec. 23, the Oregonian reported Monday, county commissioners asked Schamp to repair it rather than either rebuild it or close it to cars.

The bridge currently carries an estimated 1,100 cars per day. It’s at the 15-mile marker in the image below: 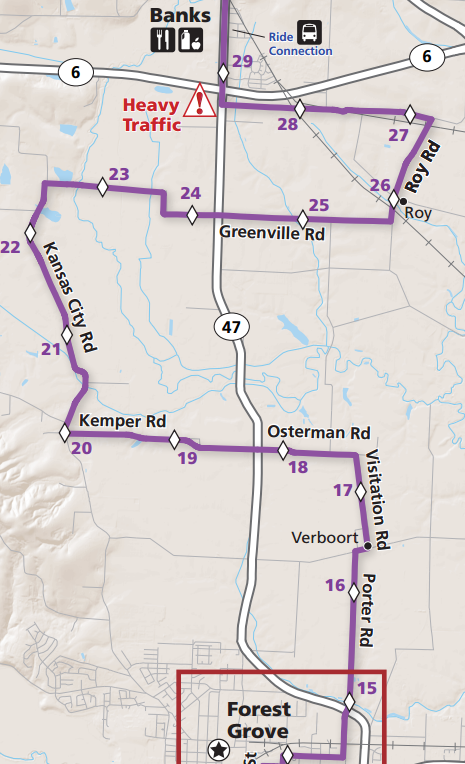 The central segment of the Tualatin Valley Scenic Bikeway that joins Hillsboro and Vernonia.

The current bridge is 65 years old. If an entirely new bridge were built (rather than the proposed repair), it’d cost the county about $1 million. Included in the new bridge would be the wider lanes (12 feet rather than nine feet) and six-foot shoulders (though not dedicated bike lanes) that are part of current county standards for local roads.

Assuming a continued average of 1,100 auto trips per day, that’d be a cost of 4 cents per car trip over the course of the next 50 years.

Everybody wins – and its’ cheaper, too!

A bitter pill for the car-hating crowd, but as a Washington county resident (and cyclist) I’m quite alright with this decision.

What does temporary mean in this context? At what point will another investment be required?

It’s not clear. From the Oregonian’s December coverage: “Eventually, there won’t be much left to repair, he said.”

Staff have said the repairs would extend bridge life 5-7 years (although it wasn’t clear to me just how deficient the bridge would be at that point).

For informational purposes:
The bridge in question is at market #15 on the map.

Will the repairs maintain, increase or decrease the rayed load of this bridge?
It’ll be interesting to see if there is any induced demand as a cutoff or bypass even if there is zero increase in “service quality”.

My perspective as a truck driver is that some of the most unsuspecting tiny rural roads become heavy truck routes suddenly when the options are: ¼ rural residential road or +5 mile detour.
If the load capacity of this bridge increases it would not be unexpected to see traffic counts double.

Washington County will repair, not close, failing Porter Road bridge near Forest Grove
Though the upcoming repairs will revitalize the bridge and lift its current 13-ton weight limit, …

So how much? I know that if I’m allowed to use a shorter low traffic route, that is legal, my 40 ton truck and hundreds of others per day will too.

… Porter Road, though given the lowest use classification in the county, already sees about 900 more trips per day than the 200 expected for a “local road.” With two roundabout projects anticipated on Oregon 47, County Commissioner Bob Terry said Porter Road is likely to see even more traffic as a detour for drivers traveling to and from Forest Grove.

I say temporary because we don’t know if their projections of how long this kludge will last are based on the current 13 ton limit * 1,100 vehicles per day or 40 tons (or higher) * however much extra traffic uses this new route over the exceeds what we expect by 450% situation we already have.

This temporary repair is a waste of money for two reasons:
() it will itself need to be replaced far before they county expects or there will be a collapse under a heavy truck.
() without a bike lane, or any bike facilities, but with the reasonable expectation of increased use the safety of non-automotive users will be put in further jeopardy.
WaCo will end up spending the big bucks on a full replacement sooner than they think; logically this should include some pedestrian and bicycle facilities.

They’d probably be better off going to Washington County’s commercial freight interests pushing for another full weight route and saying “Look, we can do a temporary kludge now and replace it in full in 2-5 years or we can get you to front us some bonds to get this dealt with the first time. Only one interruption in service and we’re going to have to spend this money soon anyways.”.

Building a new bridge for $1 mil seems like a questionable investment. As far as i can tell this road essentially serves about ten residences. To get to Forest Grove they’d have to drive 3 miles (or less) further if they didn’t want to bike/walk over the bridge. If you live in *downtown* Verboort you may have to drive ~ a mile further to get to Forest Grove. If you’re in Forest Grove on Hwy 47 and want to go east on Verboort Rd., then Martin Rd. is a more direct connection. This bridge essentially serves the 10 or so households on mid/south portion Porter Road.

If it only served 10 residences the traffic count in reality (1,100) would match the WaCo’s expected traffic count (200). The problem is that this road has historically served as a local secret bypass.
That doesn’t mean that it should be maintained this way nor should we as tax payers have to foot such a large bill for what should be a very low use local road.

The fact is that there is a push to keep this road open to through traffic (not the residents that live there) as evidenced by the willingness to spend money the least intelligent way possible. It creates a permanent increase in the “Hole In The Air” that the freight industry uses to refuse future safety upgrades that might reduce width or load bearing capacity.

Even the waste of money that is this 6-figure repair kludge is increasing the width AND weight allowances for this bridge and thuse the entire section of road.
This will be an irreversible change.
Once it happens this tiny relatively low traffic route preferred by some cyclists WILL become a truck route on a narrow road with high speeds and rural lack of enforcement.

It is obvious that some Washington County business association is pushing for this. The bridge could be derated from 13 tons to 4-5 tons and the width could stay the same. This would have the interesting effect of reducing traffic counts to logically expected levels. If WaCo Business Assoc wants this bridge THEY should pay for it.

I actually biked over this bridge, and not only does it not seem to really connect to anything, but there wasn’t really any traffic on it, either. Must be mostly commuters.