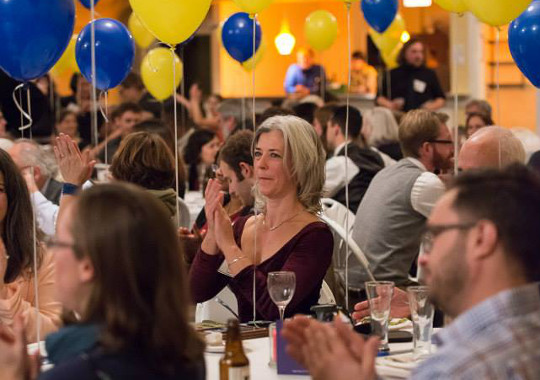 As it heads into the first year with a new executive director, Oregon Walks toasted its supporters, members and other advocates for ambling at the group’s annual Weston Awards.

“With your support, we are going to bring Vision Zero to Portland,” board President Aaron Brown told the crowd of about 200, formally announcing a $10,000 joint grant from Advocacy Advance to Oregon Walks and the Bicycle Transportation Alliance to “build a broad coalition demanding a Vision Zero approach to transportation planning, policy, and funding to all levels of Oregon government.”

The two local advocacy groups have made Vision Zero — the principle that preventing death should be the first priority of transportation policy — big parts of their message in recent years. They were among three winners out of 78 applications for “Big Ideas” grants from the national Advocacy Advance program. 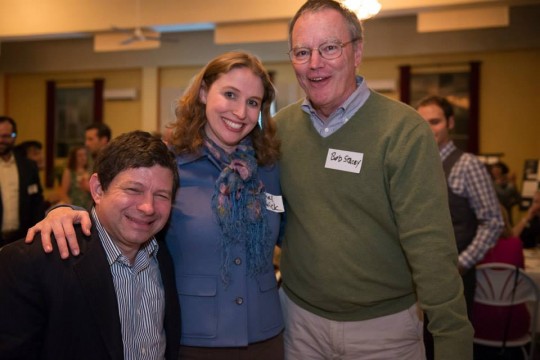 The highlight of Saturday’s program was probably the range of passionate speeches from winners of the Weston Awards, which Oregon Walks offers to recognize work on behalf of better walking. 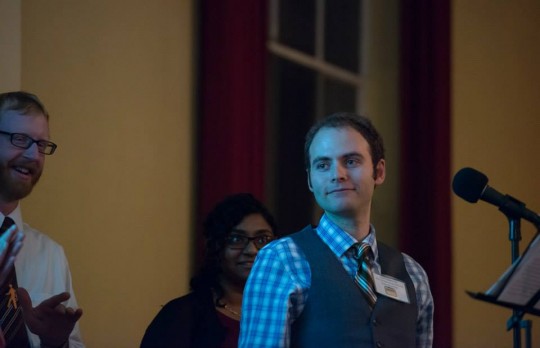 One award went to the volunteer group Better Block, which over the last year and a half has organized three temporary redesigns of public street space, most recently on West Third Avenue outside Voodoo Doughnut.

“We can demonstrate with our projects how to reinvigorate our historic commercial districts,” Better Block organizer Boris Kaganovich said at the microphone, flanked by a row of other volunteers. “It doesn’t cost a fortune to build an amazing street.”

Kaganovich asked people across Portland to reach out to the group with more ideas. 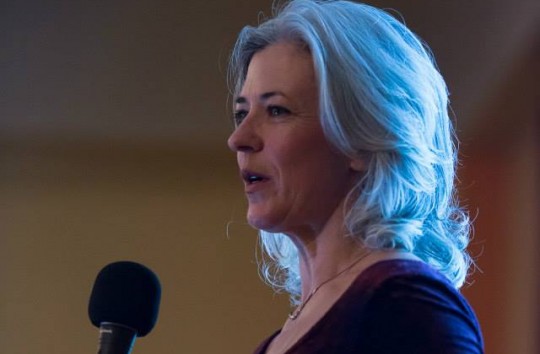 “Walking, even more than language, is what makes us humans,” she said. 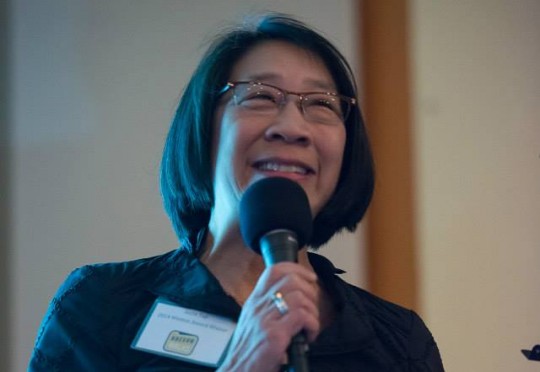 Anita Yap of the Multicultural Collaborative.

Award winner Anita Yap, founder of the Multicultural Collaborative consulting service, developer of the Cully Park Safe Access Project and a board member for the Asian Pacific American Network of Oregon and its Jade District project in the area near SE 82nd and Division, applauded the progress being made to retrofit auto-centric neighborhoods around the region.

“Look at the people we have at the table,” Yap added, alluding to the overwhelmingly white, English-speaking and well-to-do room of donors as well as to the broader political conversation in Portland. “Maybe we need a new table.” 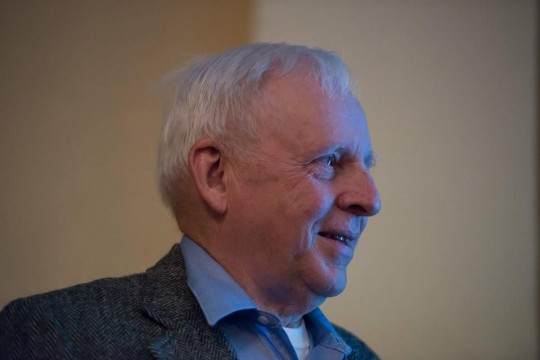 Don Baack, founder of the DIY trailbuilding team Southwest Trails, received a lifetime achievement award for his efforts to build and maintain walking paths (along with maps and signs) on public rights-of-way through Southwest Portland, part of a sometimes uneasy truce with a city government that doesn’t always invite such projects.

In one legendary action, Baack left piles of gravel and stacks of buckets at either side of an unpaved trail through Himes Park, along with signs asking passers-by to fill a bucket and scatter the gravel as they walked. Two months later, the trail was finished.

Baack urged the room to contact city leaders in opposition to an overly “bureaucratic” approval process that he said is being considered for volunteer-built trails.

“That really kills everything on a citizen involvement basis,” Baack said. “When you have busy-work and bureaucracy, nobody wants to do anything.”

A final award winner, who couldn’t attend Saturday, was Kelly Clifton, a civil engineering professor at Portland State University. Emcee for the evening was Brian Benson, author of the bike-touring memoir Going Somewhere.

The event closed with an appeal for donations to the organization, which raised a total of $17,910 thanks in part to leading donations from pedestrian- and bike-oriented law firm Swanson, Thomas, Coon and Newton and car2go Portland. 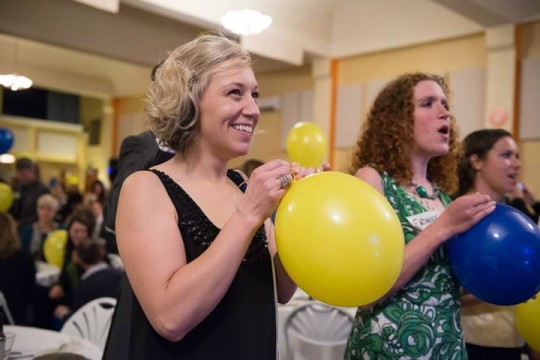 After helium balloons had been distributed to donors, Upstream Public Health transportation policy manager Heidi Guenin took the stage with Brown, untied the knots of two balloons, and the two led the room (or at least some of it) in a high-pitched verse of the Proclaimers hit “I’m Gonna Be (500 Miles).”

“That was not planned,” she said later.

You can see Oregon Walks’ other photos from the event on their Facebook page.

Disclosure: I volunteered to help set up for the Westons and I donate some personal money to Oregon Walks, as I do to the Bicycle Transportation Alliance.

Correction 11/25: An earlier version of this post incorrectly summarized Southwest Trails’ relationship with the city of Portland.

I think this Vision Zero thing is about the most interesting transportation-related thing to be debated in our town in a long time. I look forward to progress on that front, and hope ODOT or NYC’s (bike-tackling) cops don’t confuse or discourage the folks trying to make it happen.

It was part of a broader document due Sept. 4, but hasn’t been released: http://www.oregonlive.com/portland/index.ssf/2014/11/portland_bureau_of_transportat_14.html

But then there’s this part…
“If the new taxes and fees are approved, the Bureau of Transportation is expected to hire 59 more full-time employees, increasing staffing by about 8 percent.”

What?! Last I heard it was going to be 22, or perhaps that is just in the revenue bureau? I was opposed to the Street Fee before. Now I’m baffled. Have they no dignity?

I’m curious if our friend Anne Hawley can venture what the tab for that hiring expansion will come to; what fraction of the expected revenue raised will be gobbled up internally?
http://bikeportland.org/2014/11/10/city-unveils-latest-transportation-revenue-proposal-113258#comment-5795284

I’d like to hear from the Street Fund boosters here what they make of this? I thought I was sort of up on the details but this is completely nuts.

Besides the fact that as far as I know the gas tax was *not* included as an option alongside the Street Fee in the February survey Novick keeps telling us it was, it now seems like it would have been important to have mentioned in that survey that a nontrivial fraction of the revenue from this particular (city-favored) approach was going to be gobbled up in administration. The $46million or whatever is the gross take, is it not? = the amount we are expected to pay, rather than the amount the City has available to then do the safety and paving tasks it says it needs to attend to?

O.K. I appreciate that explanation. That makes more sense than what I was misinterpreting them to be saying.

Who else in SW Portland has done as much as SW Trails and Don Baack? Did Portland Public School staff help build the trail by Smith Elementary in 2014?

Pedestrian safety and advocacy is the “other half” of active transportation. It has huge potential and deserves heaps more attention.

Thanks so much for the great write-up, Michael! Hearing from our Weston Award winners about what they are excited about, what they want to see change, and the amazing work they have brought to Portland truly was the highlight of the evening. Huge thank you to our supporters, volunteers and everyone who joined us on Saturday! We’re excited about our work in 2015 to see Vision Zero become a reality in Portland, and we firmly believe it takes a social justice lens & collaboration with many diverse partners to accomplish it.

You state “Don Baack, founder of the DIY trailbuilding team Southwest Trails, received a lifetime achievement award for his efforts to build and maintain walking paths (along with maps and signs) on public rights-of-way through Southwest Portland, often without asking the city’s permission.”

Where do you get this? Please cite sources, check your facts. We have built the SW urban Trail network as spelled out in the City Council Adopted SW Urban Trail Plan. We got environmental permits where required, but did not get PBOT permits because we were told we did not need PBOT permits when we began our work in 2000 to do so by our staff contact, Bill Hoffman. Only in recent years has that been required. We have had an application for a permit pending for a very simple trail for almost a year!

Some of our most difficult projects were inspected and approved by Brant Williams, then PBOT Director and the Portland Parks trail person.

SWTrails was instrumental in getting several important pedestrian Crossings installed. Including BARBUR crossings at 4900 (Rasmussen Apartments) and SW 13th among others.
SWTrails also developed the SW component of the 2030 Portland Bicycle Plan, and w work to improve the bicycle environment of SW Portland.

Suggest you get some facts before you write another piece with such sweeping conclusions.

Don, thanks. I drew there on my reporting about your work several years ago when I was publishing Portland Afoot and devoted one month’s cover story to your work. If “often without asking the city’s permission” was in error, I apologize. I wasn’t aware of Hoffman’s implicit blanket OK back in 2000, or if I was, I forgot it.

I’ve rephrased this above and will send you an email to check its accuracy.

Perhaps BikePortland made a typo. It can’t be OregonWalks. it must be Portland Walks because once again supposedly Oregon-wide group is only focused on the Portland Echo Chamber.
Where is the group located?
240 N. Broadway #215, Portland, OR

Where are all the winners from?
Portland

Once again another advocacy group ignores the rest of the state. Why didn’t you invite the Governor of Portland Kitzhaber too?

Steve B
Reply to  Mike

Hi Mike — Thanks for your comments. Yes, we are based in Portland and certainly much of our base is in the Metro area, however we do lobby at the state level for increased funding and better traffic laws that will improve walking conditions statewide. We have much work to do and I’d like to hear more about your concerns around the state. Please send me an email at steve (at) oregonwalks (dot) org to discuss.