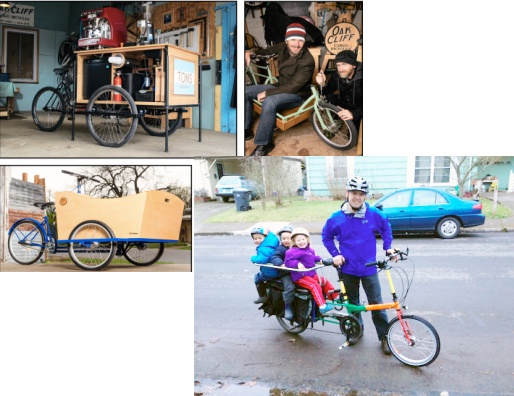 Oak Cliff Cargo Bicycles (left) and Bike Friday want to take a leap into cargo bikes. And you can help.

Two friends of BikePortland and fellow lovers of cargo bikes have recently launched campaigns that deserve your crowd-funding consideration.

Bike Friday (from Eugene) and Oak Cliff Cargo Bicycles (from Dallas, Texas) might not be from Portland, but our city has a solid place in each of their stories.

If Oak Cliff sounds familiar, it’s probably because we wrote about the start of their cargo bike journey two years ago. Riding a wave of enthusiasm for making their town of Oak Cliff more bike friendly, Jonathan Braddick and Brennen Bechtol got inspired by a Portland-made documentary about cargo bikes. In that documentary they were introduced to Portland resident Tom LaBonty, who has carved a niche for himself as a DIY cargo bike builder.

Jonathan and Brennan invited LaBonty to Oak Cliff to teach them how to build cargo bikes. Now, two years later, they’re ready to branch out on their own. Their Kickstarter campaign aims at giving them the funds to build, “environmentally-friendly, hand crafted, affordable Dutch style cargo bicycles for the masses made in Oak Cliff, TX.” So far they’ve raised $1,263 out of a goal of $10,000 they hope to reach by December 18th.

Bike Friday in Eugene is already a successful bike company; but they’ve always been known for their folding bikes. A Kickstarter campaign for their new “Haul-a-Day” cargo bike could help change that.

John Rezell with Bike Friday says he thinks the Haul-a-Day isn’t just a potential game-changer for his company, it’s a life-changer for its owners. “I can honestly say that I’ve never been more excited about a bike and its potential to change lives,” he shared in an email today.

We saw first-hand how the Haul-a-Day performs when it took a surprise win at the Portland Disaster Relief Trials back in July. Surviving The Big One is a nice bonus, but the bike’s true promise is as a minivan replacement.

Eugene’s Safe Routes to School program coordinator Shane MacRhodes was one of the designers of the bike (Alan Scholz, co-founder of Bike Friday, is the other). He made the frame easily adjustable so it can fit a wide variety of sizes and gave it a small, 20-inch wheel for a low center-of-gravity and easy step-over.

Best of luck to both of these campaigns. All bikes change lives, but cargo bikes can change our entire culture in so many positive ways that we want to see as many of them on the road as possible.

The short wheelbase version of the Haul-a-Day is compatible with Sportworks bus bike racks, the seemingly predominant bus bike rack.

My current personal bike is a Oak Cliff Cargo Bikes Clyde. I have ridden it with a slightly obese passenger (266 pounds) and almost 300 pounds of firewood on what was essentially flat double-track (gravel road with a grass strip down the center) around a campground in SE TX. No problems with the bike for either of those loads or any of the smaller and lighter loads I hauled that weekend. I should point out that there was only one non-level spot on the road, the dip down to the low-water crossing (a bridge designed to flooded out periodically to reduce building costs).

I saw that the Bike Friday bike that won DRT got stolen.

you are correct, the rider then went on to win the EUG DRT on a borrowed haul-a-day…..

I love this! Maybe because I have done cabinetmaking for a long time. Looking deeper, it’s great to see bikes being designed/built from the ground up to be useful for a variety of situations in which a garden variety bike wouldn’t work. Best of luck to everyone!

Can this haul a disabled family member and their wheelchair?

I think that would require a special-built bike, similar to installing a wheelchair lift on a van.