Two main options for one segment of the proposed Council Creek Regional Trail, in purple and in red.
(Source: Metro)

The multi-agency team that’s planning a future off-road path across Washington County is trying to decide, among other issues: straight along the rails, or winding along the river?

The deadline for public input is next Wednesday, Nov. 19.

Here are the many options for weaving across the farmland north of Forest Grove, from a planning document (PDF) on Metro’s >website about the Council Creek Regional Trail project: 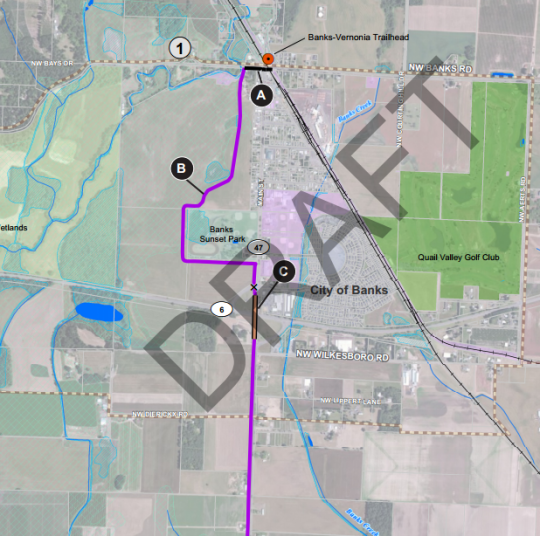 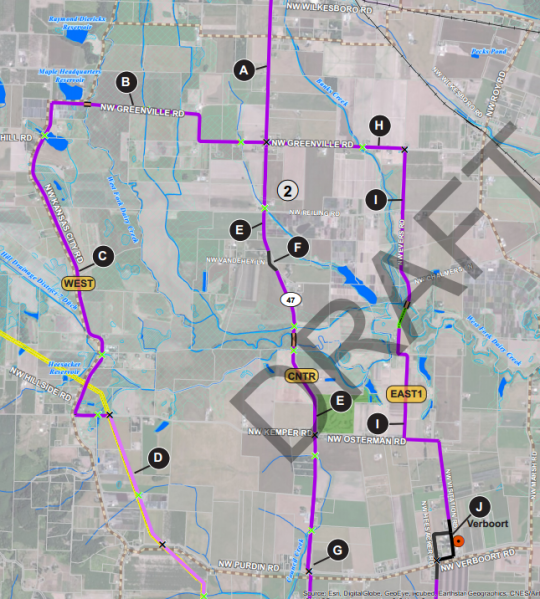 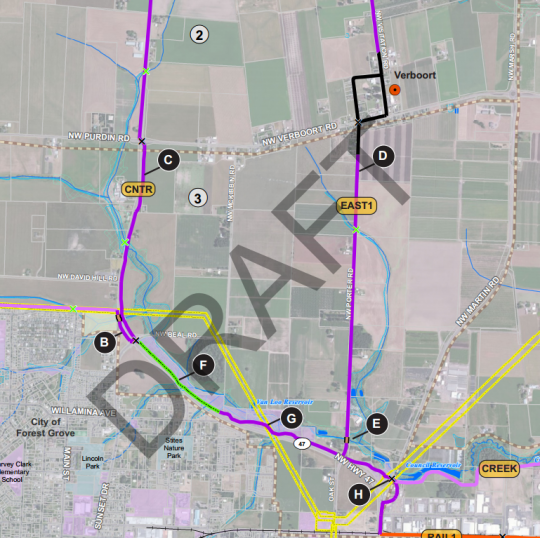 Lisa Frank, the Bicycle Transportation Alliance’s Washington County advocate, wrote in an email that after considering the options, the BTA has no particular position about the best north-south route.

“Plenty of pros and cons for any of them,” she wrote.

On the east-west segment, however, the BTA favors the straighter and more southerly railside route.

“The rail alignment is more direct, allowing commuters a shorter ride to and from Hillsboro, Cornelius and Forest Grove,” Frank wrote in a letter to Forest Grove project manager Derek Robbins. “The rail alignment also provides the easiest connection to urban neighborhoods, local businesses, and transit within these communities. Utilizing the existing rail corridor also makes sense from an environmental perspective.”

Benjamin Kahn, the BTA’s intern on this issue, added that the rail route might have the added virtue of less controversy.

“It appears there would be fewer hangups in regards to acquiring the right of way,” Kahn wrote. “The CREEK alignment runs up against residential properties and would likely require land acquisition from individual homeowners. The RAIL alignment uses an existing ROW from an infrequently used railroad line. That being said, the City of Cornelius view both options as viable and has not made any preference known.”

To share your own opinions or get updates on the progress of the Council Creek trail plan, contact Robbins at djrobbins@forestgrove-or.gov or 503-992-3292.

Really, does anyone think comments from a group with this acronym is something to be taken seriously? Did they really not think it through at all?

Clearly the organization was founded by teenage boys.

That acronym is deliberately offensive. Why they thought it was a good idea is a mystery.

I’ve done a lot of riding in that area, and I’m definitely going to weigh in. Most of the roads out there have little traffic and are, for the most part, very pleasant to ride on. Highway 47 is, of course, one exception, so I hope they’re not planning a bike lane on it. Cars and trucks fly along there at speeds that are too fast for anyone’s safety. I’d rather wind through the quieter countryside than ride on or parallel to Hwy. 47.

Are you f***ing kidding me?! And they want to be taken seriously with a name like that?

Rode 100 miles of South Dakota’s Mickerson trail as part of a tour last summer. Would seriously recommend that WA Co’s planners take a field trip out there and study it. A really well done rail-trail.

One thing to consider about the southern route is that the city of Forest Grove is interested in pursuing a MAX extension in the somewhat distant future along the PNWR tracks to hook into the regional rail network and to connect the Tuality Hospital campuses. It would be ideal to design a trail that can accommodate both facilities.

I think most could learn from other places that have rail to trails working already 🙂 I’m stoked to ride it when its done.

Along a rail corridor would be cheaper since the ROW is already cleared out. Plus, if MAX service is brought to that line, it could improve access to the trail, offer a ride home in case of a breakdown, and better security.

A trail is needed, not MAX.

I am excited to see that planning for the contingency of a future MAX line is included in this draft, something Forest Grove Mayor and residents wanted in 2009. Camping by bike would be so much easier. I’m also eagerly awaiting the Salmonberry corridor.

There’s no doubt in my mind that the offensive acronym is what they feel the presence of bicycles does to their idealic vision of white pick-up trucks frolicking in the undisturbed wilderness (their developed property exempted) of “real” America.

Tell that to the native people who were here before them.

why not connect Banks directly to Hillsboro along the same railway corridor that the Banks-Vernonia trail was built on? If you look on a map you can see that it keeps going all the way to Hillsboro

nevermind. I see in a map in one of the above links that they want to build that trail as well… it’s call the “Turf to Surf” trail. Seems like it would make the most sense to focus on that one to piss off less people potentially.

What do you envision the purpose of the trail? Leisure or transportation? River would be nicer views, more relaxing, offer something besides a straight shot. Rail would be a straight shot, more efficient and in the long run cheaper (I assume).