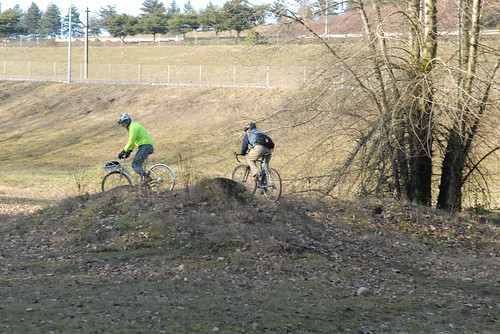 We are excited to announce that six and-a-half years after we first told you about Gateway Green, supporters of the project have planned their first official bike event. Yesterday on their Facebook page, the Friends of Gateway Green unveiled plans for “Community CX,” a cyclocross exhibition race that will take place on November 15th.

The event announcement comes less than two months after the City of Portland officially took over ownership of the 30-acre parcel that sits adjacent to the Airport MAX and the intersection of I-84 and 205. Portland bought the parcel from the Oregon Department of Transportation for $19,300 and plans to develop the area as an off-road cycling destination.

Portland Parks Commissioner Amanda Fritz said back in August that Gateway Green will, “boost Portland’s visibility as a world-class bike-friendly city,” and that it’s, “a tremendous use of the underutilized land.” 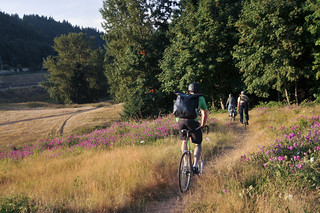 Riding down the highest point at the
park’s southern end (near Halsey overpass).

Gateway Green’s topography and mix of open meadows and forested areas make it a natural place for cyclocross. Jocelyn Gaudi, a Friends board member, says she and other volunteers have designed “a dynamic course with plenty of great observation areas to entertain the whole crowd.” The Community CX event will feature a full slate of racing for all categories and there will also be activities for kids.

Gaudi adds the the event will be more of a community gathering and the race is meant to be “fun and casual.” It will also be historic, given that this will be the first-ever organized bike event at Gateway Green and, according to Gaudi, it’s the first cyclocross race to be held on a Portland Parks-owned property since 2002 (if you don’t count Portland International Raceway).

The race also marks the start of a major fundraising campaign. Race entries will be $20, all of which will go toward the $1.6 million that the Friends of Gateway Green must raise in order to cash in on the $1 million Metro grant they won back in July. When all this funding comes together, they’ll have $3 million to spend on the first phase of the park’s development.

— Check out the event schedule and stay tuned for updates by checking out the Facebook event page. If you have questions or would like to get involved with the event, contact Gaudi at jocelyn(AT)gatewaygreenpdx(DOT)org.

does this mean they took down the No Trespassing signs?

It’s a shame the area around Gateway Green is anything but “bike friendly”. Bike hostile is more like it.

I think it’s OK, except for the Halsey St. overpass. For folks that haven’t been out that way, be careful to NOT take the lane going East when heading over 205. I’ve seen people nearly creamed more than once. Instead you’ll need to go against traffic on the shared sidewalk.

Hey I don’t think the 205 path does anyone much good around there unless they are going north-south. You are basically trapped down on that path between Maywood Park and the Gateway transit station.

And that’s exactly where Gateway Green is.
I’m just saying it is very easily accessed from the 205 path.

Can’t wait to take MAX to a CX race.

You can do it this weekend to (Washington County Fair grounds), and other weekends (PIR, etc.).

not been able to get excited about this…for the last 6 years. I’ll have to get out there and check it out and hopefully then I’ll get it

Thanks for the write up, Jonathan! We’re looking forward to hosting a great event and are hopeful that a big crowd comes out to enjoy our newest public park!

If Gateway Green cross is a fun as Fazio Farms I’ll have a happiness meltdown. Courses in unexpected places just do it for me.

I’m excited about this since I can take the MAX there .

Just a word of advice from experience: taking MAX to Portland fall cross races can be a little rough (with hauling a filthy, mud-caked bike back on the train) Make sure you bring a lot of towels, change of clothes, and for sure get your bike washed there (although I don’t think there is any water source at Gateway Green).

Great idea for people to hose their bikes off before getting on the train, and to have a change of clothes. If water isn’t there already, Parks Bureau likely will be bringing it in at some point.

Awesome idea, I’ll be there.

It’s great to have another transit friendly CX avenue. For others thinking about the max/CX link, there are already 3 crusade races (PIR x 2 and Washington county fairgrounds) and 5 weekday evening races at PIR that are also at a max stop (though the weekday evening series has already wrapped up).

Venue, not avenue. Though it is “a venue”…

on my bday just might have to do it! 🙂