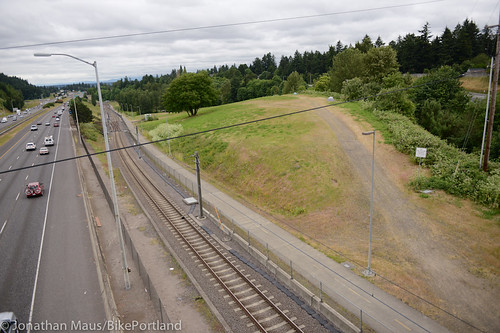 The southern tip of the Gateway Green parcel seen from the NE Halsey overpass.
(Photo by J. Maus/BikePortland)

Gateway Green, a 38 acre parcel in east Portland that’s slated to become a bike park (along with other things), came away as the big winner in Metro’s “Nature in Neighborhoods” grant program. $5.2 million in awards were announced last week and Gateway Green received all of the $1 million they had requested — an award larger than any of the other 9 projects.


The grant is just the latest boost for a project that first came into focus in 2008 when neighborhood activist Linda Robinson and Gateway area real estate developer Ted Gilbert partnered up to push a vision for the currently neglected parcel of land between I-84 and I-205.

Robinson, who’s now chair of the board of the non-profit Friends of Gateway Green, says while she’s thrilled with the Metro grant, the money isn’t in their bank account yet. The Nature in Neighborhoods program requires a 2-to-1 local match. That means Robinson and Gateway Green proponents have to come up with $2 million of their own money in order to accept Metro’s $1 million. The good news, says Robinson, is that they can count existing grants and contributions, volunteer time, and in-kind donations from the past two years toward that total.

A crowd-funding campaign in fall of 2013 raised over $120,000. When all added up, Robinson estimates they’ve probably raised somewhere on the order of about $400,000. “That gives us a good head start on raising the match,” she shared last week.

Robinson also says that the official transfer of the Gateway Green property from ODOT to Portland Parks & Recreation (a necessary step to moving forward) is expected next month. There will be a celebration event at the site after the Portland City Council votes on the transfer.

Once the remainder of the matching funds are secured, the $3 million will go toward construction of the park. Stay tuned for more updates and opportunities to volunteer and donate.

— Learn more at GatewayGreenPDX.org and by browsing the 16 stories in our coverage archives.

there’s usually 2 or 3 tents on that hilltop.

So excited about this development! Congrats, Gateway Green!

What is a bike park? Do they mean mountain bike trails?

As long as NWTA is involved in the park design, I am 100% behind this effort!

Why do they need this much money? We need trails now, not more fund raising. How much did sandy ridge cost total? around ~1 million ?

The plans are for more than mountain bike trails. Eventually the whole area will be turned into a park.

Will this cover construction of the 205 underpasses linking to Rocky Butte?