SE 17th is getting a makeover between Sellwood and Milwaukie.

A new, $3.4 million path and street design update will vastly improve the bicycling connection between Portland and Milwaukie and the City of Milwaukie wants your feedback on its preliminary design.


The SE 17th Avenue Multi-Use Path project was awarded nearly $3 million in federal “flexible funds” in 2011. The project will create bike lanes and a physically-separated path on a one mile section of SE 17th Avenue between Ochoco and McLoughlin Blvd. The path will connect not only our two cities, but it will also provide a safer bikeway between two major regional paths: the Springwater Corridor and the Trolley Trail.

The Oregon Department of Transportation (who holds the pursestrings on this particular pouch of funds) initially proposed a completion date of 2017, but elected leaders in Milwaukie who are eager to close this gap successfully lobbied ODOT for an “expedited” planning and permitting process that will see it get done by fall of 2015.

SE 17th in this location is currently very uncomfortable for cycling (and walking). Or, as the City of Milwaukie described in their grant application: “The mix of deteriorating infrastructure and changing conditions results in a hazardous and confusing environment, particularly for bicyclists and pedestrians.” The shoulder in the southbound direction is often filled with debris and is relatively narrow. There’s a standard bike lane in the northbound direction, but people drive fast on 17th — thanks in part to its 60-foot width — and it’s not very pleasant to ride on. 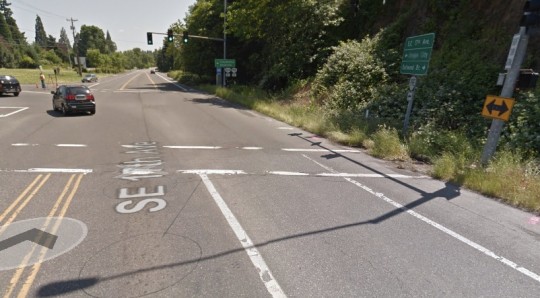 Looking south at the 99E Junction. 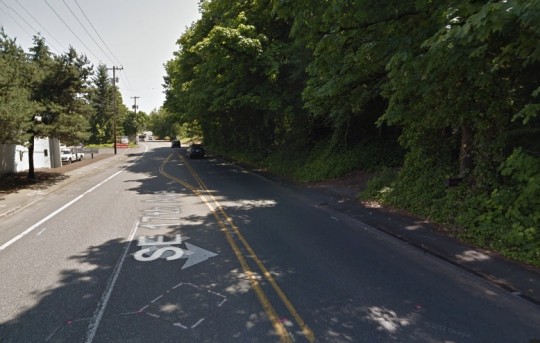 The project would redesign the street to include two 11-foot wide standard lanes, two five-foot wide bike lanes, and an 11-12 foot physically separated (with a planted stormwater swale) path for biking and walking along the western edge of the existing right-of-way (see lead graphic).

The City of Milwaukie has completed a preliminary design for the path and they’re hosting an open house on Monday, October 27th. There’s also a “Ride Along” event planned for October 30th.

I may be in the minority, but I’ve never felt terribly uncomfortable on that section of road, which I ride every workday. The exception, as hinted at in the article, is when debris covers the southbound bike lane, esp. wet leaves in the heart of autumn. Then it gets bad.

My experience is that cars drive much closer to cyclists when they’re north of the railroad tracks (roughly SE Linn St); that’s the section that causes me more anxiety.

There are a couple of really sketchy sections heading south, where there is a sidewalk/curb thing that juts out into the bike lane.

I agree it’s not the worst thing in the world, but it’s not exactly inviting for many people who would otherwise be using the two MUPs on either end of it.

Speaking for myself as well, this stretch of road convinced my husband and myself not to buy an awesome little house in the lil bit of Milwaukie near Elk Rock Island (right between downtown Milwaukie and the Willamette, would have been super cool!)

I find it tolerable to ride every now and then recreationally, but I knew that it would make me want to ride the MAX instead of biking.

Many people use Main street to the Springwater as an alternative which seems to have a lower volume of autos on it than 17th.

Doesn’t that route spit you onto the 99 sidewalk though before the ramp at Pendleton?

Correct. Bike Milwaukie has used Main St and that ramp up, onto the Springwater for many group rides from ages 8 to 80 and it has worked really well. So much so, that a number of our regular riders are now using Main st over using 17th. Once this 17th Ave project is done, I have a feeling a lot of us will move over to 17th for it’s more direct path.

But would you take a 10 year old on a ride along this stretch of 17th as it stands? Cars are generally rolling at 30-40 mph in this stretch of road. The idea here is to build something that makes it more comfortable for a more diverse group of users.

Great perspective we were riding from Milwaukie into Sellwood just yesterday and changed our route so our 10 year old could avoid this section.

As a pedestrian, the few times I’ve walked it, it seems like a classic place for “car driver unconsciously veers right into pedestrian.” And it’s dark, too.

I had a lot of trouble finding the location of the image titled “Looking south at the 99E Junction.”… it’s actually the 224 (Milwaukie Expressway) junction…

I’ve ridden this route quite a few times. The two items I hope they fix are:

1. There’s a stoplight at the junction of 224. For southbound bike traffic, there’s no reason to stop as long as you stay in the bike lane. Even more so with a new sidepath.

2. Gravel isn’t the only road debris that fills the southbound bike lane of 17th Ave as it merges onto McLoughlin. It’s often overflowing with overeager cars just itching to make their right turn. I’m hoping the new path addresses this.

I won’t be able to make the ride along or open house but hope there will be opportunities to provide feedback online.

I forgot about the encroachment of gravel and automobiles into the “bike lane” (it’s more of a narrow shoulder) on southbound 17th just as you reach McLoughlin. I agree completely that addressing those issues would make for a safer and more pleasant ride.

Welcome to California. I (politely) called out a guy on Murray in the Beav once and said he needed to check out the Oregon rules on this because they’re different than California. He said, “How’d you know I’m from there??”

“there’s no reason to stop as long as you stay in the bike lane.”

1. It’s the law. (the technical reason)
2. Traffic coming off Hwy 224 turning left onto 17th can sometimes turn wide (especially if it’s a large truck) and encroach on the bike lane. Bad place to be at that time (the practical reason)

I would agree with the above that I don’t find this route particularly comfortable overall, but there are definitely safety problems with right-turning car movements, both from SB 17th onto McLoughlin, and from NB 17th onto 224.

I’m pretty excited this is happening, it will be nice to ride with the family down to the Milwaukie farmers market on Sundays.

Also as it is currently it feels pretty uncomfortable when you pass someone jogging or another rider, plus there are a couple pinch points where it is quite narrow. I kinda think this will be a big deal. So big thumbs up from me to the City of Milwaukie!

The only issue not addressed is trying to cross 17th anywhere near Ochoco. The Springwater trail, empties out there, by Goodwill and the RR tracks… Got Traffic light?

This is great to hear. I’ve always wished there was a better bike connection to Milwaukie. Since it’s so wide, why not make the 5-foot bike lanes buffered?

I would prefer that the bike lane be between the buffer and the 11.5′ side path. Then it would be a bike lane comfortable and safe for all ages. This would also solve the gravel-in-the-bike-lane problem. Lets stop with just making things better and lets start making active transportation facilities great.

Don’t forget, once you are Milwaukie, it is an easy (and legally questionable) roll over that old railroad bridge and BAM! you are in Lake Oswego. To cross the bridge you must be comfortable riding on steel grating that looks like it is about to fall into the river and make sure no trains are en route.

No, it’s not legally questionable at all – it’s fully outright illegal.

What do you all think about the double provision of bike facilities (on-street bike lanes *and* a side path)?

Would the design be better off if the 10 bike lane feet were dedicated to a wider separation, wider path, or separate pedestrian tread?

This design raises the question of what it means to provide for “all ages and abilities” (bike lanes vs. protected bike lanes), and right now this proposal is kind of a half-measure compromise.

I like this design. You have better bike lanes for folks who still want to go faster in the road and then a completely separated path for slower traffic/families. Separating everything would have its detractors too. I think this design does hit all demographics/skills. The path in Milwaukie is really not used that much yet, so moderate speed cyclists likely won’t have a ton of traffic to dodge on this new separated path (at least weekdays/evenings/etc.).

If you are connecting to the Springwater, the intersection at westbound-Ochoco and southbound-17th can be tricky for making a left turn on bike: 1) the slight bend on 17th (just north of Ochoco) makes it difficult to see southbound traffic on 17th; 2) northbound and southbound traffic on 17th can be non-stop for long periods; 3) you have to cross railroad tracks while making the left turn, with traffic. Is a crossing light a possibility, similar to the one at 17th and Umatilla?

I recently walked this stretch. I’d welcome the improvements.

What is the latest progress on this? It needs to be ready before the new Sellwood Bridge opens.

Why is there such a desire to mix cars and bikes? What about a bike path right along the new 7.5 miles of max line. That seems to me to be a perfect, long, non-stop stretch of available space away from traffic. It would also allow bikes from the Milwaukie area to get to many other bike paths without having to go so far west. Let’s think about more than just downtown.

This article is somewhat inaccurate. The council caused ODOT to move the completion deadline up to fall 2016, not 2015 as pathetic as that is, and the cost will now top out over $4 million. Otherwise, things are progressing.

I ride this segment almost daily, and the project looks to be completed and ready for opening soon. While I welcome the upgrade and look forward to its opening, I am less enthused about the number of bicycle stop signs they threw along the bike path: there are at least 5 new bike stop signs by my counting, not counting traffic lights, along the stretch of the new path. Since those are mostly stops for entry to private homes, would it be sufficient and better to use bike yield sign instead?

Yeah, I saw all those stop signs on the path when I went by there today. I’m not sure what the logic is of requiring users in the public right-of-way to stop for every private driveway. It’s definitely not a way to build infrastructure that is efficient for bicyclists.