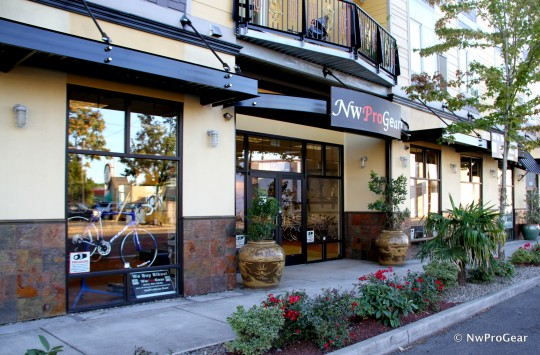 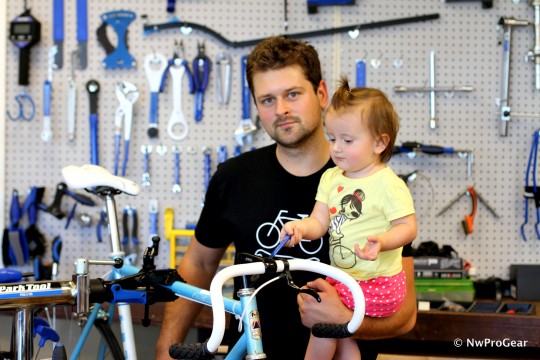 Kuzmich said his daughter Rachel is “also a bike enthusiast.”

NW Pro Gear, which sells both new and rehabbed bikes, set up shop in August in the heart of Lents, at 9240 SE Woodstock Blvd., just west of Interstate 205.

“It’s a pretty good market,” owner Dimitriy Kuzmich said in an interview last week. “This is an up and coming area, I believe. That’s part of why we chose it. … I think it has a lot of potential for growth, and there is a lot of bike traffic in this area, too.”

With its location at the junction of both the freeway and Springwater Corridor path, NW Pro Gear is convenient for people driving in from Clackamas as well as to bike users in the neighborhood and those to the east.

Kuzmich’s business model is a little unusual: in addition to dealing in the workaday Fuji, SE, Kestrel and Breeze brands, he also accepts and resells used bikes of all sorts, often involving trade-in credit.

“We buy bikes that people either have outgrown or they have got another one,” Kuzmich said. 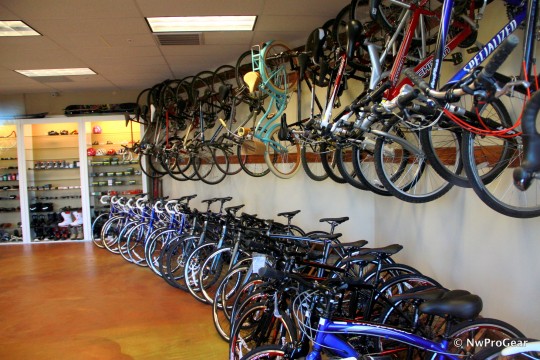 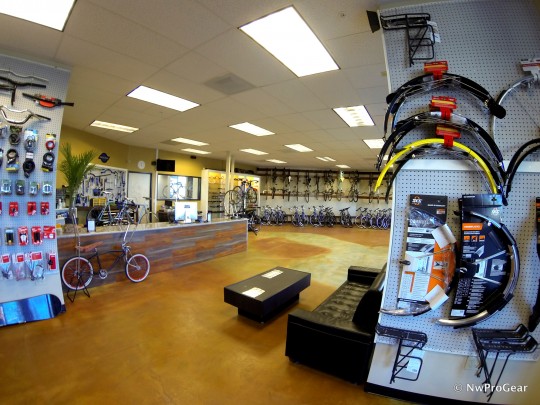 Another unusual touch: 10 percent of profits go to nonprofit organizations.

Kuzmich said he tries to minimize new purchases of all the components he uses for repairs.

“99 percent of it is recycled,” he said. “We only do 1 percent new parts, which is usually just cables, cable housing, grips and innertubes.”

As a used-bike buyer, Kuzmich said he does what he can to fight theft.

“All of the bikes we purchase, they do go through the police system to make sure that nothing is reported stolen,” he said. “We’ve actually reported six stolen bikes in the last month alone. … If anyone does bring in the stolen bikes, we hand all of their information over to the police.”

It’s always great to see good things happening in Lents, an old railroad town whose decline only deepened after I-205 cut through the middle of it. Let’s hope Kuzmich’s shop is just the leading edge of more nearby services to come.

On behalf of all cyclists in Lents (I think that’s a fair thing to say): yay and welcome!

Seems like a good business model. I’m sure a lot of people want to buy a new bike, but have trouble justifying it, because their current bike is OK. Selling your bike on Craigslist is a hassle, and you always get low-balled. Getting a decent trade-in credit and a new bike in one transaction seems really smart.

I would say it’s just as likely that people are way overvaluing their used gear on craigslist as getting lowballed (I’ve some outrageously priced used stuff on there).

But I agree I was checking out their site a few weeks ago, and he has very affordable, reasonable used bikes for sale.

Chris I
Reply to  davemess

1. Determine actual value of item
2. List it 50% higher
3. Buyer offers half of asking price
4. Meet in the middle

davemess
Reply to  Chris I

true. i just view anything bike related like autos. The minute it rolls out of the shop only worth about half retail.

was carless
Reply to  davemess

Yeah, my favorite was $325 for a 1980 Schwinn Varsity – original components! So many of CL bike listings are a joke.

What ? do you know where Springwater is ?

Yes, it’s about 0.3 miles from where this shop is located.

The 205 bike path is also less than a block from his shop and it connects directly to the springwater .25 miles to the south.

Yay, a bike shop in Lents!

But… It’s hard to spot this place even if you know where it is. They close early on Friday, don’t open at all Saturday, and are only open a few hours on Sunday.

Hopefully they’ll rethink their schedule and rind some way to brighten their signage.

Those are not successful store hours for a retail business.

His prices for used bikes are very reasonable.

I stopped by Sunday and expressed surprise he was closed Saturday. He said it was his religion, keeping the seventh day holy. May explain closing early on Friday also.

There are a lot of orthodox Adventist families in our neighborhood- and yes, the stop working at sundown on Friday until Sundown on Saturday.

By the way, I wouldn’t call Kestrel a workaday brand – the story must have meant to name a different make.

Kestrel has been selling bikes at bikesdirect.com, so the brand is less fancy than it used to be.

Looks like they got bought by Advance Sports, who also own Fuji.

In August, one week after my wife’s bike was stolen in a break-in of our house, NW Pro Gear called me to say that a man had tried to sell it to them. They confiscated it and we got the bike back.

They’ve earned our business. I hope others go there, too.

Y’know, it’s funny to refer to “Southeast Portland’s bike shop desert.” Certainly they thin out in the OUTER southeast – east of 82nd, where NW Pro is. But overall? I just glanced at the sidebar of this article, listing bike shops by neighborhood. There are more in the southeast than any other part of town.

Now if Clackamas Cycle World could get a makeover…. I find myself driving farther up 82nd to go to the new Bike Gallery, which is right next door to Trader Joes…where I always pick up a bag of chocolate covered peanut butter pretzels. If Clackamas Cycle World was refurb’d I could go there and not consume the extra calories.

I had the pleasure of meeting Dimitriy at a local business networking event the other night. He’s great!