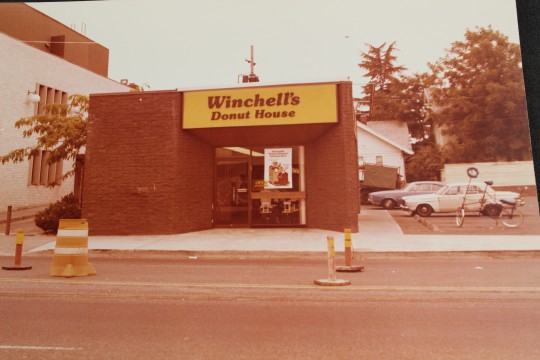 Local freelance reporter and BikePortland friend Lee van der Voo came across the above photo in the City of Portland’s archives and sent it along. It was taken in the parking lot outside the former Winchell’s Donut House at 5601 NE Martin Luther King Boulevard, now home to Geneva’s Shear Perfection barber and beauty salon.

Here’s a closer look at the same photo: 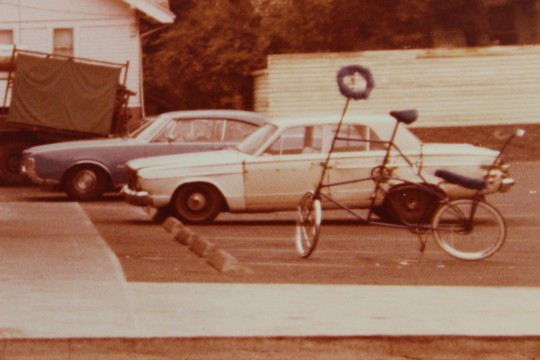 It’s hard to tell what that is dangling from the handlebars — a lei? A tutu? In any case, it’s nice to know that even in this town, some things never really change.

(And if you happen to know whose bike this is or was, please let us know.)

Plus, it’s a tandem.

Yeah, two frames plus a few more tubes, but I’d call it a tandem instead of a long-tail tall-bike because of the crank and pedals for the stoker. Hard to tell for sure, and I’m sceptical how well it would work, but it looks like a single loop of chain might connect all three gears in a triangle.

I love that it’s taking a parking space!

Well, claiming one, at least.

Maybe it was owned by the founders of Voodoo Doughnuts doing some early field testing.

I’m guessing that’s a steering wheel with a fuzzy cover.

Weird has deep roots here, yes it does!

How is it not tipping over on that kickstand?!??

Probably a steering wheel. We had tall bikes back in small-town Midwest USA in the dark ages of the hippie era, and bicycle steering wheels were necessary along with a banana seat, for the bike to be “complete”. We also had PPVs or people powered vehicles. Lightweight fiberglass pedal cars with side by side seating. The cops didn’t know WHAT to do about them, so they banned ’em of course.

absolutely hilarious. thanks for the link.

Not sepia, but a faded Kodacolor print.

Too cool!
Are there any Winchell’s in Portland anymore? Not that it’s that big of a deal, just trying to remember.

A.K.
Reply to  AndyC of Linnton

I don’t think there are, HOWEVER, I think that the Heavenly Donuts on Lombard is a former Winchell’s – someone can perhaps verify or correct that assumption.

Reminds me of the old Mojo Nixon song,
“Standing outside of the Winchell’s,
Feeling very existential.”

I have a photo of a bunch of bikes lined up in front of the old Coon Chicken Inn out on Sandy taken in the late 40s. Now, if somebody could tell me how to scan and post it? The photo quality isn’t very good anymore. On the other hand, realizing how politically correct things seem to be, might cause too much of a stir.