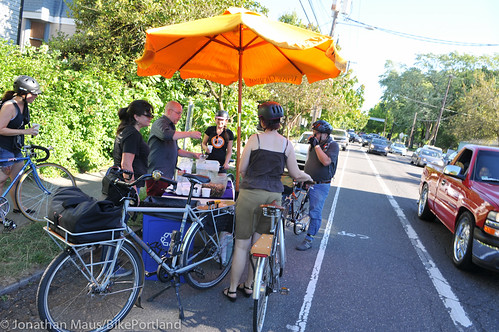 Wine Up, a wine bar on Williams Ave, gave away free snacks and drinks to bicycle riders yesterday.
(Photos by J Maus/BikePortland)

What often gets lots in emotional planning meetings and divisive media headlines is that, in reality, many business owners in Portland not only support bicycling, they embrace and encourage it. Nowhere was that more evident than last night’s Rider Appreciation Day on N Williams Ave. 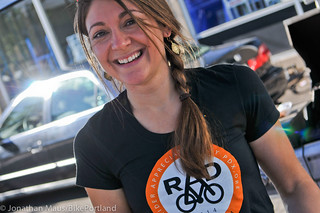 Created in 2012 by Portland Design Works, a business located at the southern end of the very popular Williams Ave bike route, the event was created to to change the biking/business narrative. It’s a simple idea really: encourage business owners to head out into the street and show their irsupport for bicycle riders.

In a parking lot adjacent to PDW’s headquarters on Williams and Hancock, the company’s co-founder Erik Olson and Jocelyn Gaudi, their marketing manager, mixed among a large crowd. Olson was BBQ’ing free hot dogs and Gaudi was busy making connections and making sure everyone was having a good time. The Bicycle Transportation Alliance had a booth set up where folks could sign up for the group’s email newsletter and become members right on the spot. Also at the PDW stop were Portland Bureau of Transportation staff who stayed busy walking curious citizens through the major changes coming soon to Williams Avenue. 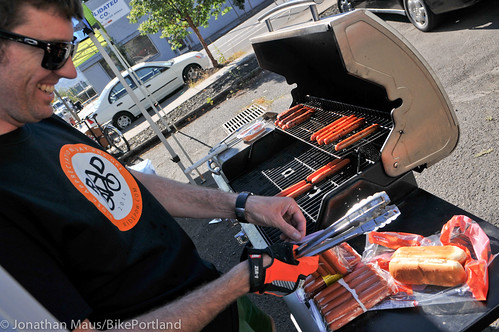 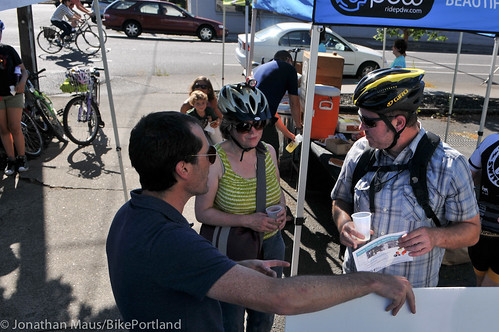 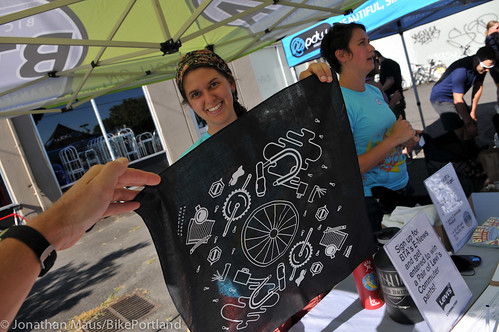 BTA volunteer Tessa Buono shows off one of their membership perks — a free bandanna.

A few blocks up the road, employees from Metropolis Cycle Repair were handing out free patch kits and stickers while store owner Nathan Roll was servicing bikes. 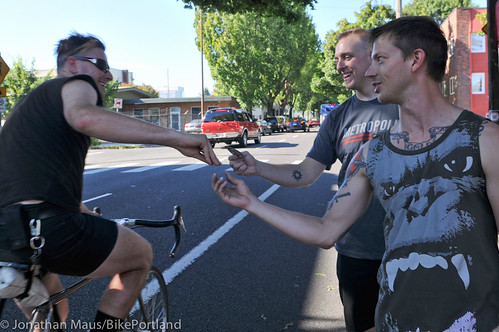 Further north I noticed an umbrella outside Wine Up on Williams so I pulled over to chat. Wine Up owner Camille Gonzalez and head chef Steve Payne poured me a cup of refreshing cold water infused with mint and cucumber and handed me a sampling of savory and sweet trail mix. “We see all these bikers going by all the time and we just wanted to come out and say hi,” Gonzalez said. As riders stopped in, Gonzalez told them about Wine Up and offered free wine tasting coupons. 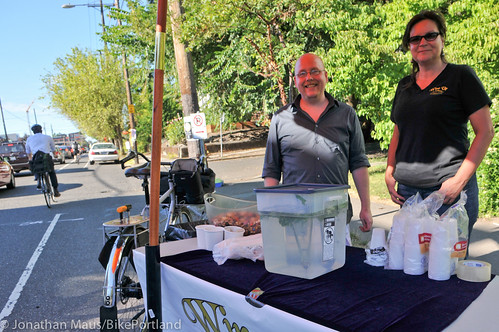 Camilla Gonzalez and Steve Payne from Wine Up on Williams. 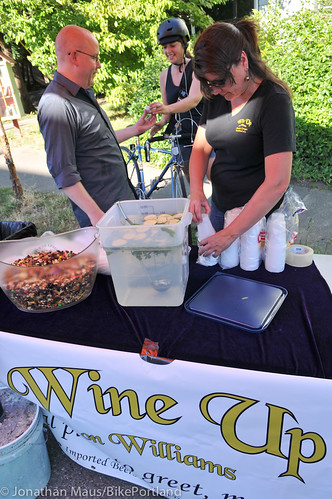 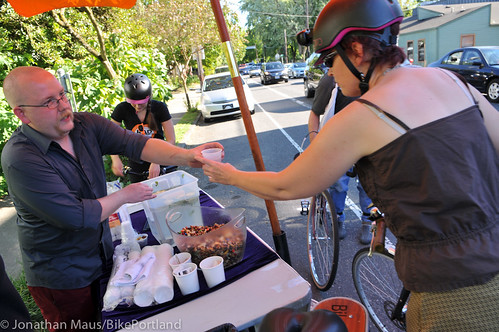 As we were chatting, we looked up to see another rider get right-hooked as someone turned their van onto N Monroe. The woman on the bike gathered herself and then slowly walked over to the Wine Up table. After getting a drink and enjoying a chat with Gonzalez I heard her say, “Thanks! I’m sort of glad I got right hooked and ended up stopping.” 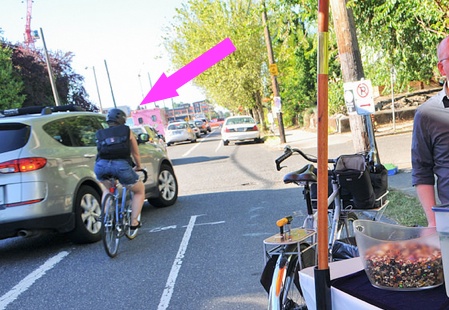 Yikes! This sucks, but at least she picked a good place to pull over and take a break.

Oh, the joys of biking on Williams.

After navigating the congestion around New Seasons, I gladly pulled into the next stop at Cha! Cha! Cha! taqueria. Employee Kayla Shutes was standing out near the bike lane offering riders ice cold tamarindo and horchata. For those who stopped, there was also a plate of taquitos and empanadas to sample from. 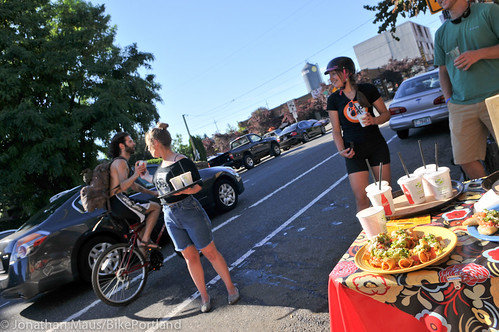 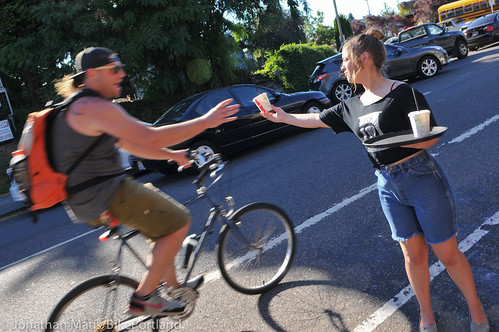 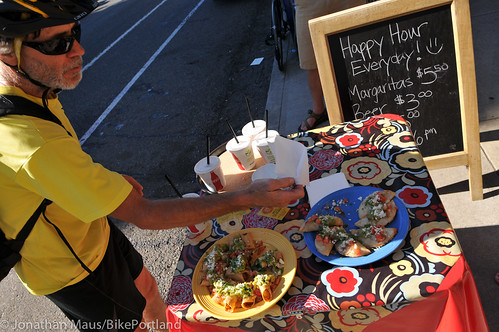 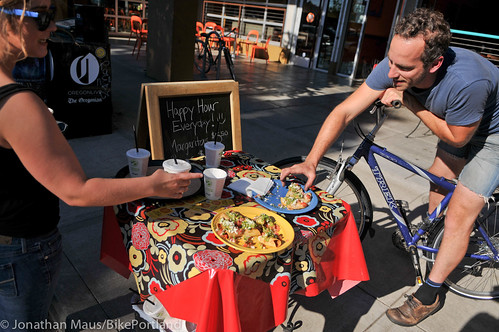 My last stop of the day was Hopworks Bike Bar where a live band played out front and the sidewalk was jam-packed with appreciative bike riders sampling free tastes of beer in free pint glasses wrapped in free koozies printed with a message of “Keep on biking.” 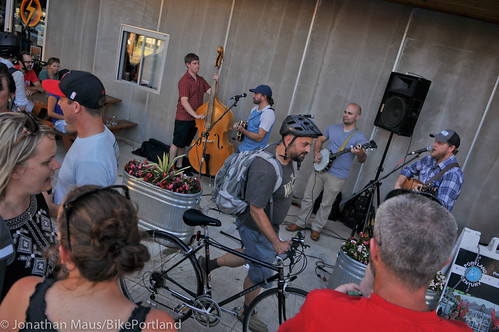 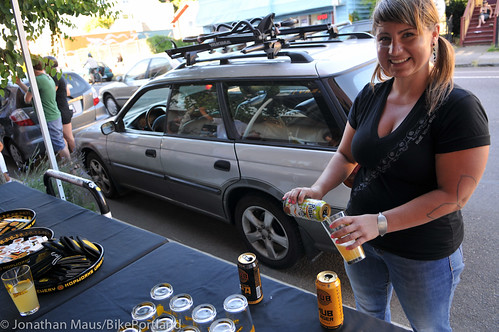 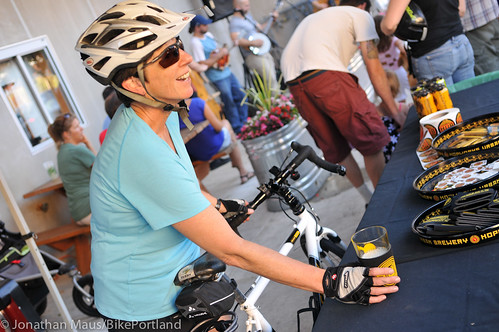 All this! Just to show appreciation for bicycling and the people who do it every day. That’s my kind of event.

Thanks to Portland Design Works and all the businesses that took part in R.A.D.

Looks like a great time! When does the restriping project happens on N. Williams? This summer?

When does the restriping project happens on N. Williams?

I don’t know, but the last time BP reported on it, they said it was scheduled to be completed by “end of summer”, well, we’re coming up awfully quick on back-to-school time and they haven’t even started. I’ve been looking around for any more up-to-date info and haven’t seen any.

Hi John, the construction is set to begin in mid September and last six weeks. The project open house is August 12, 6pm-8pm at Immaculate Heart Church at 2926 N Williams.

Thank you for the update, Steve.

Can you address a concern about the project work? N. Williams is a bit of a mess right now, especially just south and north of Fremont because of a few construction projects that have closed sidewalks.

Do you know if those sidewalks will be be back open before the re-striping begins?

Too bad you didn’t catch the plates on the right hook situation. Could have made good evidence for a citizen citation case. 😉

It was actually a event to support Bike Clark County and their “Back to school bike build” by Torque Coffee Roasters and The Mighty Bowl that ran from 11am-1pm. If you rode a bike or wore a BCC t-shirt we gave you a ticket for a free meal @ The Mighty Bowl and if you gave a donation to BCC you got a two for one coffee coupon @ Torque. Many thanks to Ryan & Steve, owners of Torque & Mighty Bowl for generosity in helping us raise $300 to rehab 50 bikes we will give to local at risk/needy kids (with a new helmet of course)!

Did that girl manage to avoid hitting that car?? Looks like a pretty egregious display! If it was me I can’t say there’d have been a ‘break’ – more like a chase would have ensued… kudos to her.

wow, this looks like a big deal, with permits needed for setting up in the right-of-way and everything…

I had no idea it was happening… was it not advertised anywhere? I often miss these cool events and have no idea where I could have found out about them…

With a lot of great events happening, it can be hard to keep track of them. That’s why ORbike is here – to help you find your next ride (or event). Since 2005 we’ve provided a state-wide comprehensive calendar of bike rides, workshops, clinics and free events. We also offer discounts on plenty of rides (currently: $20 off Gigantic Bicycle Festival and Tour de Lane).

Our newsletter goes out to 40,000 regional bike lovers. You can sign up for it at ORbike.com – we had an article about RAD.

Thanks for the great recap, Jonathan! PDW is so grateful for all of the support from our fellow businesses in celebrating the cyclists that ride Williams everyday. We had a blast and are already looking forward to next year!

It was great so much goodwill in a hectic environment.