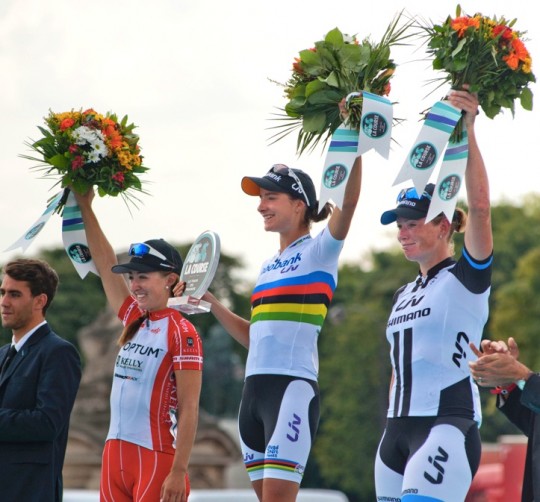 In Paris on Sunday there were women on the podium, not mere “podium girls.”
(Photo: Luc Revel)

— We’re excited to share a report from a major bike race in Paris — and we’re not talking about the Tour de France. Author and former Portland resident Anna Brones witnessed the first ever “La Course,” a women’s race put on by the organizers of the Tour, and she filed this report for BikePortland. (Photos by Luc Revel)


Three women stood on a podium on Sunday and it wasn’t to give flowers. It was to receive them.

When I was in middle school I wrote a list of life goals. Number 34 was “go to France and watch the Tour de France.” I already loved cycling and I loved watching the Tour de France on television with my father. For me the Tour embodied something that was about more than just cycling. As a matter of fact, I didn’t always know the names of riders, and I certainly didn’t entirely comprehend the ins and outs of bike racing, but what I did know is that cycling made me happy, and watching the Tour felt like taking part in something big, even if from afar.

Sunday I took part in something even bigger – something I never could have dreamed when I wrote my life goal list so many years ago. On Sunday, I stood on the Champs-Elysées to watch women ride their own race, a 91-kilometer route through Paris, at the inaugural La Course by Le Tour. 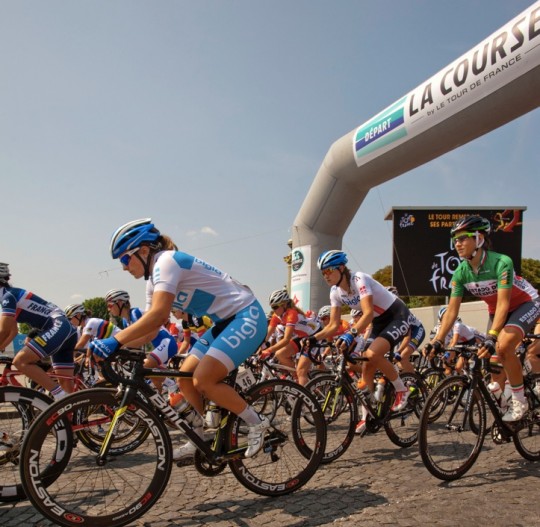 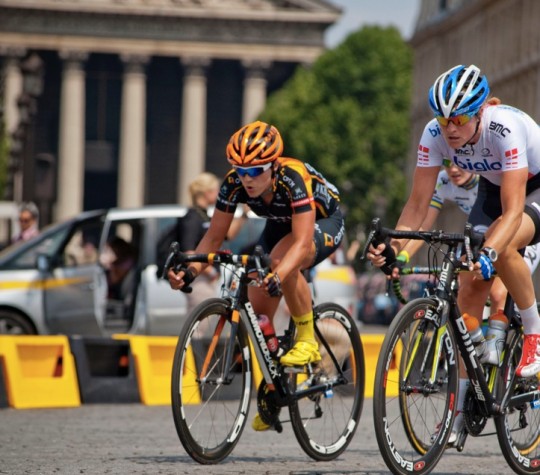 It was only a little over a century ago that cycling was still taboo for women. In 1891 a writer wrote, “I think the most vicious thing I ever saw in all my life is a woman on a bicycle.” The bicycle ended up being a vehicle for emancipation in the early 19th century, memorialized by Susan B. Anthony’s famous quote: “Let me tell you what I think of bicycling. I think it has done more to emancipate women than anything else in the world. It gives women a feeling of freedom and self-reliance. I stand and rejoice every time I see a woman ride by on a wheel…the picture of free, untrammeled womanhood.”

“I think it means even more for the women watching than the women racing.”
— Emma Pooley

Dealing with such a gender gap is no easy task, but you have to start somewhere, and what better way than with the most iconic bicycle race in the world?

I signed that petition. So did over 97,000 other people. The result was Sunday’s La Course by Le Tour, a momentous event that will go down in not only cycling history, but women’s history as well.

That aggressiveness and passion showed on every single lap as the women looped up and down the Champs-Elysées, speeding past some of Paris’ most iconic buildings and monuments. They were fast. They rode hard. It was a wonder to watch.

To run the race on the same day as the final stage of the Tour de France ensured an incredible amount of media coverage, ensuring exposure of a women’s bike race like never before. “This has the biggest audience of a women’s race ever probably,” said Pooley. “I hope lots and lots of women around the world see it and are inspired by it.”

That’s the ultimate takeaway from Sunday’s race. While the chance to ride on the Champs-Elysées is every cyclist’s dream, the end impact isn’t just for the racers. “I think it means even more for the women watching than the women racing,” said Pooley.

Wellington agreed, emphasizing that this was certainly more than just a race. “This is just the beginning, races like this will grow and develop, and at the grassroots [level] more women will get on bikes,” she said. “Hopefully little girls are watching this that grow up and think that they too can ride a bike, ride it professionally, if they want to, no matter where they live, whether they’re in France, or Britain or Afghanistan.”

Three women stood on a podium on Sunday and it wasn’t to give flowers. It was to receive them. La Course champion Vos, and all the rest of her racemates can be proud not only of the fact that they rode on the Champs-Elysées, but that they’re building a movement that goes beyond the race course.

So let us all ride, whether it’s for a race, or just for fun. And let’s make sure that we encourage others to ride too, in the process, building something bigger and better that everyone can take part in.

Big congrats go to Portland’s Brie and Southern Oregon’s Jade for getting their Optum rider to the 3rd step on the podium!

Damn straight! It’s high time to start including everyone all the way up to professionals.

Cycling needs to join swimming, tennis, soccer, track, etc. where women can hold their own. I would encourage co-ed participation on time trials and teams as well.

Kudos to the participants and the promoters! Let’s get cycling out of the 19th century.

What women’s professional cycling needs is more races, more sponsorship, and more TV coverage. The situation for the women’s tour is improving little by little, but not fast. Unfortunately the economic situation in professional road racing is shaky, even for the men’s tour. Few races make money (the TdF is the rare exception) and few teams have solid long term sponsors.

“Three women stood on a podium on Sunday and it wasn’t to give flowers.” One of my new favorite quotes from bikeportland!

I’m continually amazed at the gender disparity at the bike valet in favor of women! Over 60% of all users are female and they have some of the nicest bikes.

Head that Portland Bicycle Studio opened at 4:30 AM to show the race but unfortunately I’m not alive at that hour – so thank you for this coverage and great story.

I wanted to watch it, but I don’t have the right channel. If I’d known it was being shown locally (or even thought to look for it), I’d have gone, no matter the time.

Hey, ya remember when Marianne Martin won the inaugural Tour Feminin in 1984?

‘Bout d@mn time! Europe is like a crotchety old man in some ways

There is one minor typo, you typed “In 1891 a writer wrote, “The bicycle ended up being a vehicle for emancipation in the early 19th century”” when it really should have been the 20th century. Other then that, the article was great!

I didn’t get to see it, but just have to wonder – were there hunky guys handing the girls flowers and teddy bears and kissing them on the podium?

One of the biggest things I’ll miss about the Mt. Hood Classic is watching the girls race – they kicked ass!

I don’t normally comment about things like this, but give me a break. It’s bad enough that, in the men’s races, young women are used as decorations on the podium, but in the photo for this story, did you really have to call the women who made the top three “podium girls”? Would you have called Vincenzo Nibali a “podium boy?”

I hear what you’re saying… I was actually trying to be ironic and smart with that caption. I regret if it came off the wrong way. And yes, I would absolutely call Nibali a “podium boy” of the photo merited such a caption. I’ll add quotes around “podium girls” to help clarify my intention. Thanks for sharing your feedback and for trying to understand my attempt at wit.

Thanks, Jonathan. I appreciate your follow up. I can also appreciate a good sense of humor, since mine is most definitely skewed and occasionally gets me into trouble!

That bothered me too, I’m glad to see it altered. Unfortunately irony and cleverness can get clouded when infantalizing and minimizing language is the norm when it comes to women in sports.