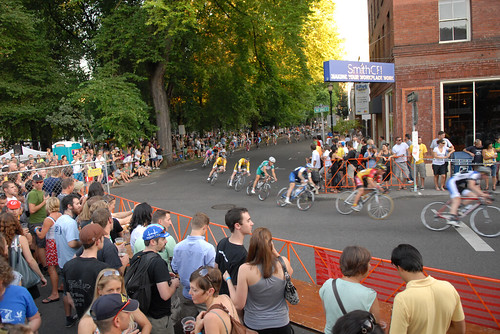 Corporate marketing professionals know a good tie-in when they see one. Perhaps that explains why Volkswagen will sponsor two bike events during the festivities leading up to the 2014 Major League Soccer All-Star Game that’s coming to Portland next month.

The big news is the announcement of the Stumptown Crit on Sunday, August 3rd. This event was created specifically for MLS All Star weekend and it continues the tradition of the Twilight Criterium. The Twilight is Portland’s only major downtown criterium race and it’s known for drawing top talent from all over the west coast and drawing over 10,000 spectators to the North Park Blocks. Unfortunately the Twilight has also had budget and sponsorship problems in years past. It almost died completely in 2008 before being resurrected in 2009.

With the backing of VW, the event is on solid financial footing once again.

This year’s criterium will run on the same course as the Twilight (although it’ll be during the day as opposed to the evening). In addition to the pro race (for both men and women) at the end of the day, there will also be a category 3-4 race, a pedicab race, and a kids race.

In addition to the crit, Volkswagen is also sponsoring the “Rose Pedal” family ride (also on Sunday 8/3) that will start at 10:00 am in Waterfront Park.

For more details, check out the MLS All-Star Game official schedule and PortlandCriterium.com.

The USAC license is $70 plus $35 entry fees make this basically a race for non-Oregon racers, which makes me just a little sad. It’ll be interesting to see if they have many racers in the categories besides Pro 1/2.

It will be even more interesting to see if they have any Cat 3-4 riders. Although some Cat 1/2 riders have USAC licenses, very few Cat 3/4 do. Unfortunately the Volkswagen sponsorship is tied to the USAC sanction. Oregon is very much anti-USAC. I am afraid this will mean that participation levels will be very low. May end up bring a lot of fuss for very little show.

Kids race free after they buy an international license.

Carrie, did you not see the “Pro-1-2-3 Women” on the schedule for 2pm? That’s the race for amateur women right there (Pros through amateur Cat 3).

I was excited until I saw the USAC bull- Support the Tigard crit that day instead!