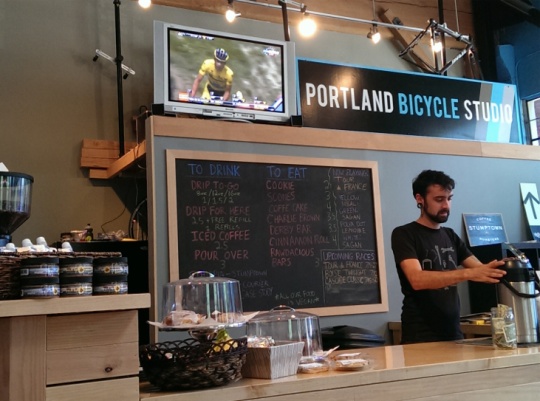 The Tour de France is already well into its first week and the action is heating up. For many fans “Le Tour” is a must-see race, but unlike the World Cup it’s not always easy to find a reliable (and cheap) television feed. That’s where bike shops and cafes step in to fill the void with viewing parties and big screens.

Portland Bicycle Studio (1435 NW Raleigh Street)
Portland Bicycle Studio has recently moved into a larger location that now features a cafe, full coffee service, a wide range of bikes, some serious bike racing enthusiasts on staff, and of course a big screen. Proprietor Molly Cameron invites all of you to her shop where she’s showing the Tour live every morning at 7:00 am (check the shop’s Facebook page for earlier start times). In addition to the Tour you can also catch up on the women’s-only Giro Rosa, another major race that’s underway.

Since you’re showing up so early, PBT will be serving fresh coffee roasted by local companies like Stumptown, Courier, Case Study, and Grimpeur as well as fresh pastries and snacks. 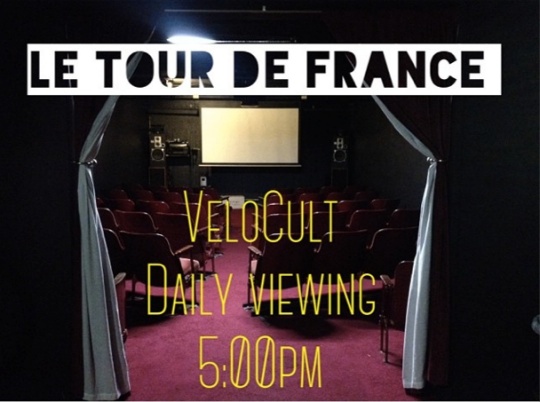 Your own private movie theater awaits at Velo Cult (seriously).

Velo Cult (1969 NE 42nd)
On the other side of the clock is another great option for taking in the Tour on a big screen. Velo Cult is running replays of the day’s Tour stage each day at 5:00 pm. While you won’t be seeing the action live, the fact that you can enjoy a cold pint from their always delicious beer selection more than makes up for it. Another bonus to watching at Velo Cult is that you get to sit in their awesome basement theater which stays nice and cool in this summer heat.

St. Honore Boulangerie – (3333 SE Division, 2335 NW Thurman, and 315 1st St in Lake Oswego)
St. Honore does right by its French roots by upholding a long tradition of showing the tour at their bakeries. This year you can watch it at all three of their locations. The Lake Oswego and SE Division locations will show the race every morning at 7:00 am and the NW Thurman location will show it at 6:00 am. If you don’t get up that early, they’ll be replaying the stage all day.

After an eventful “Grand Depart” in the U.K. that featured massive crowds of spectators (not all of them quite aware of how to be a bike racing fan), the racers have now headed to France. There’s plenty of racing left as the 21-stage event isn’t set to wrap up until July 27th. Tomorrow’s stage will be a much-anticipated jaunt over the cobbles of Paris-Roubaix fame. Happy viewing! And if you know of other locations, please let us know in the comments.

Does the downtown Bike Gallery not open their doors early for TdF viewing anymore? They used to, anyway.

It’d be fun to have Manouche music as a background in some place–Sel-Macs, not synthesizers! Oui!