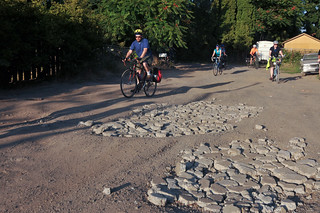 The projects are biking, walking, and transit centric and they come from all around the state. There are three projects in the Portland area that have been awarded funds.

The City of Portland will receive $640,000 for Phase II is their East Portland Access to Transit project (which costs $710,000 in total). This project will fund a variety of projects that will make biking and walking easier and safer in the area south of I-84, north of Foster Road, and east of I-205. The money will pay for development of bike boulevards, crossing treatments, sidewalks, and even a marketing push to make sure people know about the improvements once they’re built.

PBOT also won $400,000 for a large-scale SmartTrips marketing effort that will encourage residents to use the new eastside streetcar line.

Another project that will impact bicycling in the region is Metro’s Intertwine Regional Trail Signage Project. The agency won $265,000 for this project, which we shared a sneak peek of earlier this month.

What’s not on the list is the SW Barbur Blvd Demonstration Project, a $1.2 million project that would have built several safe crossings on this treacherous street between SW 19th and 26th Avenues. This project gained attention when it was passed over by Metro’s Flex Fund process (some said in favor of the bike share system) and activists have been clamoring to make it happen. While it wasn’t funded, it was included as an “Alternative” project this time around (which means, if one of the 25 funded projects falls through, it could get the green light)..

How much of this spending, this infrastructure, really, would be necessary if we didn’t (once we no longer) have to worry about cars running us over, crowding us off the roads, scaring us out of the public right of way?

One of the most interesting things I learned at the Car Free Cities conference when it was held here a few years ago was that in places where there are no cars sidewalks don’t exist. People just walk in the road. So much infrastructure, so much spending, and all to deal with the externalities of the automobile. Is anyone tracking & classifying these expenditures that way?

middle of the road guy
Reply to  9watts

How much of that infrastructure would get built if there were no cars providing the funding for it?

hate to say it, but cycling does not pay for itself. They big argument people use is that it does not cause any additional damage to infrastructure – but the funding of that infrastructure is dependent upon automobile use.

9watts
Reply to  middle of the road guy

“How much of that infrastructure would get built if there were no cars providing the funding for it?”
Last time I checked, cars weren’t providing funding for anything; they were depreciating. Those who drive cars pay gas taxes, ’tis true, but as we’ve had plenty of occasion to discuss here, those (declining) taxes do not cover the (growing) infrastructure demands automobility places on our budgets, much less the far larger societal costs.

But what I was saying above–and what you’re missing–is that this bike ‘infrastructure’ is almost entirely defensive, rendered necessary by cars driven at speeds and at densities that are unhealthy for everyone. As near as I can tell, these expenditures, this infrastructure is wholly unnecessary but for the overwhelming car presence on our public thoroughfares.

wsbob
Reply to  middle of the road guy

“…but the funding of that infrastructure is dependent upon automobile use.” middle of the road guy

Infrastructure construction and maintenance is dependent upon the need people have to travel and transport goods and services.

Motor vehicles are merely the present, predominant means by which that need is met. If there weren’t motor vehicles, people would still be traveling and transporting things, needing road infrastructure of some type to do that.

The use of motor vehicles for travel and transport in many, many traffic situations, is commonly an extremely extravagant use of road space. In those situations, walking and biking can be a far more efficient and conservative use of the roadway.

Art Fuldodger
Reply to  middle of the road guy

Beth Slovic, are you listening?

didn’t this happen awhile ago? was this just another body that had to approve the funding?

This is phase 2 of the project. Sorry post wasn’t clearer. Posted it from the Summit and didn’t take the time I’d like to have taken.

hooray for the east side!

Great news in tight times! I have to wonder about $400,000 for marketing, though. How much infrastructure could be built for that?

“…The City of Portland will receive $640,000 for Phase II is their East Portland Access to Transit project (which costs $710,000 in total). This project will fund a variety of projects that will make biking and walking easier and safer in the area south of I-84, north of Foster Road, and east of I-205. The money will pay for development of bike boulevards, crossing treatments, sidewalks, and even a marketing push to make sure people know about the improvements once they’re built. …” maus/bikeportland

“…PBOT also won $400,000 for a large-scale SmartTrips marketing effort that will encourage residents to use the new eastside streetcar line. …” maus/bikeportland

Even in these days of rising costs, $400,000 is a still quite a large chunk of change. I think you’re right John R …whether it’s cost effective to spend $400,000 just to encourage residents to use the new eastside streetcar line, is worth taking a close look at.

The streetcar won’t be open for months. I commented before that I think it’s a waste to “market” the streetcar until it’s actually available. Better to spend the money on some physical improvements or even continuing fareless square.

Finally. A network of Neighborhood Greenways for east Portland!

Correct me if I’m wrong, but isn’t the project just for sidewalks along a few limited streets? Seem to remember a lot along Division…

There are a three more bike/walk projects funded in the Portland metropolitan area that will benefit people walking and biking in other areas of the region:

2. Max Trail Completion and Enhancement in the City of Gresham – links to the Gresham-Fairview Trail

3. Arata Road Pedestrian and Bicycle Enhancement Project in Multnomah County will make it safer and easier to bike and walk near Wood Village

Barbur just can’t get any respect.

I really like the use of the “rock-garden” traffic calming. Who says there are no fun MTB features in Portland proper;)

Congrats to PBOT and ODOT. Good progress toward building the Portland Bicycle Master Plan for 2030 — keep it up.

Congrats to East Portland for securing this much needed and well deserved funding!

I testified at the OTC Hearing in Salem on Feb. 15th, in support of the Barbur Project. Despite the support of ODOT R-1 office, Mayor Adams, TriMet, Portland’s Pedestrian and Bicycle Committees, SW Neighborhoods, Inc, Willamette Pedestrian Coalition, Coalition for a Livable Future, and Upstream Public Health, this project sits at # 6 on the alternate list.

My testimony focused on safety issues – Barbur is a High Crash Corridor, a high speed and high volume arterial with long distances between safe crossings, bike lane and sidewalk gaps, poor access management, etc… The ODOT staff response to my testimony was that safety is included in all grant criteria, but not really the primary criteria for ODOT Flex Funds.

The Program Goals are: