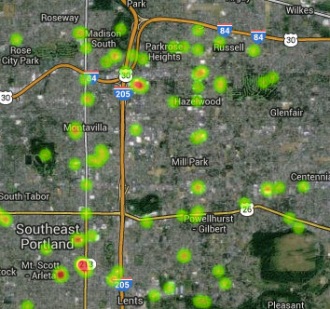 A coalition of nonprofits and community groups calling itself “Prioritize Portland!” has created an easy-to-use online survey to ask more Portlanders what walking, biking and public transit improvements are needed most.

Here’s how one supporter describes the survey’s goals:

The survey uses geographic-based online tools and asks respondents questions about locations: Where roughly do you live? Where do you see barriers to physical movement? Where would you like to see new sidewalks, crossings, transit service, or bikeways? Which types do you prefer? The resulting data includes statistical data, line data, and point data, including “heat” maps like the one attached.

Though anyone in the city is invited to participate, Prioritize Portland is putting particular emphasis on Northeast Portland’s Cully area and on Portland households east of 82nd Avenue, with a 14-question paper version being mailed to all 57,899 home addresses in East Portland with the help of “major one-time funding from the East Portland Action Plan.”

The coalition will also be conducting workshops this fall to help the neighborhoods use the resulting data to create neighborhood transportation master plans.

This looks like a terrific way to get very detailed data on the specific needs of ordinary people, who said in surveys this spring that they value safer walking routes even more than pothole repairs and other essential maintenance.

It also fits nicely into a project we’ve been wanting to do at BikePortland for a long time: a week of reporting from East Portland. In the second week of June, Jonathan and I will be setting up shop east of Interstate 205 and telling the stories of biking in the eastern third of Portland. If you know of one that needs telling, let us know.

The survey has a biasing flaw. It doesn’t have options like, “there are no streets nearby that we are reluctant to walk on.” I stopped taking the survey rather than enter false reports.

I kind of feel the same way, especially considering the preferred road to bike on question.

As a life long vehicular rider I prefer in the street without a bike lane which wasn’t an option – I picked unmarked side streets.

I think the questions about destinations, routes and sidewalks/crossings are the most helpful.

And you do have the option to skip questions, which is exactly what I did on the question that you brought up. Since I’m not really reluctant to walk on any street/sidewalk.

You can skip questions if they’re not applicable.

OPAL is listed as a promoter of this survey and we continue to be involved in it’s development, but we also want to continue to be vocal about our concerns over the survey process and current product. We sincerely respect the hard work that many people put into this. But without getting into too much detail, it’s sufficient to say that TriMet effectively vetoed important transit questions regarding satisfaction, coverage, affordability, and community members’ preferred transportation trade-offs (such as creating dedicated bus lanes by removing on-street parking and/or bike lanes and/or etc). The two transit questions that did make the final version of the paper survey are either redundant considering existing data, or quite narrowly framed and therefore limited in their usefulness.

The online version includes slightly more/better questions about transit, but not the questions community members most advocated for. They have also found this version very difficult to use and time-consuming, raising additional flags about how representative online survey responses will ultimately be.

Again, we respect the hard work that so many have put into this effort to collect better transportation data. Projects like this are very important. But we hope that this particular product can be improved moving forward.

Thanks for weighing in with OPAL’s perspective, Jared. That seems strange that TriMet wouldn’t want information of this sort. What questions in particular would you have wanted to see included?

It is not clear in your story that TriMet helped create the survey. It appears they had a hand in it from what Jared says.

“A coalition of nonprofits and community groups calling itself “Prioritize Portland!” has created an easy-to-use online survey

I’m not certain we need any more surveys or means of identifying problem locations. I think there’s plenty of local knowledge already. What we lack is a willingness to get things done. We’ve gotten ourselves into “analysis paralysis.” I don’t know what this effort has cost in survey development and administering it. There’s obviously been a huge staff effort from many agencies. I’d rather have the money spent on, say, one rapid-flash beacon.

It’s pretty easy for us east Portlanders. We duck and cover.

That’s why the street fee is such a scam. I doubt any of that money will be used east of 82nd.

Thank you to everyone who has taken this survey!

In reply to the May 27th comment: We are!

In reply to the question of public funds used for this survey: Public agencies Trimet & PBOT each contributed a total of 10-20 hours of a staff person to writing the survey and attending 4 meetings, as did non-profits OPAL, East Portland Neighbors, Verde, and BTA. City of Portland Office of Neighborhood Involvement, through its East Portland Neighborhood Office (EPNO) contributed about the same for writing the survey, but also about 40 hours of staff time in putting together the final edits and printing the survey. Two other non-profits and a private graphic artist were hired to do about $1,500 in translation and layout work. Printing 58,000 copies of the paper survey cost an additional $3,500 – these were sent to every single East Portland household, including apartment dwellers, through a neighborhood newsletter. In all, about $7,000 in public funds were expended for this survey, plus the cost of non-profit staff time. Considering that PBOT spent $78,000 for the flashing beacon and construction at NE 78th & Glisan, this is a bargain. Several community volunteers also helped in developing and promoting the survey, expending over 50 hours total.

Did I mention that 2 unpaid core specialized volunteers spent over 200 hours developing and processing this survey over the last 9 months? David Hampsten & Travis Driessen organized and conducted the sometimes difficult meetings (imagine OPAL, PBOT, the BTA, and Trimet in the same small room, each vying for as much limited space on a survey as possible, that they are not paying for), took notes, drafted the surveys, performed all of the web work, and are now processing the survey results. Other highly specialized volunteers are setting up the GIS data model for analyzing the results.

In reply to the complaints about the clunky tools: Sorry, it’s the best we could do with the free tools we have; we find them clunky, too.

About the complaints from Jared at OPAL: Trimet said the exact same thing. Welcome to “decision by committee”. Happy to work with you, too.

About the bias comment: You are right – We who wrote it live in East Portland and Cully, areas with few facilities.

I’d like to clarify TriMet’s involvement with the Prioritize Portland Transportation Needs Survey. The East Portland Neighborhood Office invited TriMet to participate in the process. TriMet staff developed survey questions to submit. Two TriMet questions were in the final online and hardcopy survey, but they were revised by other participants. Our intention was to recommend transit questions that would improve the usefulness of the survey results. TriMet made suggestions about the other transit survey questions that were submitted, however the final survey questions were ultimately determined through a group process led by East Portland Neighborhood volunteers.

We sincerely appreciate being part of such a collaborative process and respect the efforts made by volunteers to carry out consensus decision-making. We look forward to seeing the survey results and continue to look for more input to help make transit better. We invite everyone to share your ideas for better transit at trimet.org/future.