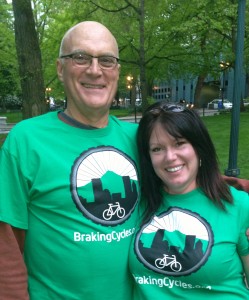 Two years ago, Rhona Mahl asked one of the young, homeless men she works with what his perfect job would look like.

“His was, he loved his bike,” the social service worker recalled in an interview Thursday. “He goes everywhere on his bike.”

The conversation inspired Mahl to create a social enterprise that could move him toward a job working with bicycles. This week, she said she’s on the cusp of making it happen: Braking Cycles, her nonprofit startup, would be a combination coffee shop/bike-resale charity/bike-gift-design firm.

Volunteers, she said, will staff the coffee bar and make bike-themed greeting cards and jewelry from old bike parts. They’ll also repair donated bicycles, which she then hopes to resell to local used bicycle shops. Mahl aims to hire experts in each field to train the volunteers, who will eventually be eligible for jobs at Braking Cycles or partner organizations.

In an interview Thursday, Mahl said she’s secured $15,000 worth of equipment donated by a defunct coffee shop and pledges from donors for enough startup capital to rent the coffee shop’s first space, though she’s hoping to find someone willing to donate free space somewhere in central Portland.

Mahl, who’s been working on the plan for a year and a half, said she’d be the paid executive director of Braking Cycles and would hire another staffer to manage the coffee shop.

It’s an unusual business plan. But Mahl is excited to begin it. She said local nonprofit pub Oregon Public House has chosen Braking Cycles as one of its “spotlight organizations” for July, August and September. Speaking by phone Thursday, Mahl said she was preparing for a meeting that day with Mayor Charlie Hales to talk about possible shop locations.

Part of Braking Cycles’ larger mission, Mahl said, is to create change in the world of homeless services, which depends heavily on government contracts.

She hopes the profits from Braking Cycles can be reinvested into the work of Transitional Youth, a charity with a $400,000-a-year budget that was created and for years was fully funded by Bert Waugh, founder of the major local real estate brokerage Prudential Northwest Properties.

“I love Portland and I just feel like we can utilize what’s most beautiful in Portland,” Mahl said. “And that’s bikes and coffee and art.”

“I told him, as soon as we get our shop, I’m going to hire him as a mechanic,” she said.

Why not do this in Beaverton where the charity is based? Keep it local and serve the homeless youth in your own city instead of forcing every homeless youth to move to Portland to get services.

Sounds like an interesting project with a lot of potential. I look forward to seeing it come together wherever the location ends up being. Bicycles are such an important transportation resource for low income people. Good work Rhona.

What a great program. I hope that Braking Cycles checks out The Bikery (http://thebikery.weebly.com/) in Oakland and Changing Gears (http://www.changinggearsbikes.org/) in Alameda.

I just wanted to give props to the Oregon Public House too. Way to go!

Thanks for the post and comments! We are really excited about it AND our partnership with Oregon Public House!

In terms of setting up “shop” in Beaverton, that is simply where our corporate office is with Transitional Youth. We have actually been serving in downtown Portland for 22 years. In addition, we have two homes youth can stay in long term to learn job skills and go to school.

We are looking for space closer in SE or NW. Far enough away from the hub some of the pitfalls in what keeps our youth stuck in cycles, yet close enough they can access needed services to keep them growing in the right direction.

Thanks for the support!

What an awesome, compassionate and constructive way to help those who really need guidance. I work downtown and see these youths regularly. Thank you for helping them.