On Monday, we highlighted a few bike ideas from around the country that Oregon might imitate, but so far hasn’t. One of them: formally endorsing the National Association of City Transportation Officials design guides.

But Jessica Horning, the transit and active transportation liaison for the Oregon Department of Transportation’s Region 1 (which contains the Portland metro area) replied to our question about this with a fair argument: Oregon’s in-house design guide is already really good.

Developed by practitioners in Portland and other cities around the country, the NACTO guides are a sort of professional Pinterest for human-friendly street designs such as protected bike lanes and traffic diverters. Images are well-annotated and informed by extensive research about safety and performance.

Washington, Massachusetts and California have all endorsed NACTO’s guides. It’s a big development for California in particular, where state regulators have until recently tried to prevent the construction of physically separated bikeways.

But here’s what Horning says about the situation here:

ODOT’s Pedestrian and Bicycle Design Guide was developed and adopted in 2011 – about the same time the NACTO Urban Bike Design Guide was being developed and published – and contains design guidance on many of the same design treatments that are covered in the NACTO guide. ODOT has formalized the guidance for the newer facility types in the NACTO and ODOT design guides (e.g. cycle tracks, raised bike lanes) into standards in our Highway Design Manual (Chapter 13). The ODOT guide also covers many rural/suburban design issues (e.g. rumble strips, chip sealing) that are not addressed by NACTO, but are vital for ODOT to keep in mind to facilitate pedestrian and bicycle access and safety in the non-urban areas we serve. 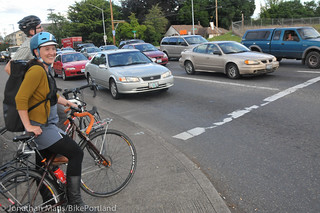 Here in Region 1, there are copies of the NACTO Urban Bikeway and Urban Street Design Guides available at my desk that staff regularly borrow for reference. We have hosted brown bag lunch presentations on the guides (in addition to our regular monthly Association of Pedestrian and Bicycle Professionals webinar series) to make sure staff are familiar with the subject matter and many of our staff have attended trainings that cover the NACTO guides. They are definitely valuable resources, and I can see the potential value in endorsing them. From a personal/practitioner viewpoint, however, I would prefer to identify any important guidance that is in lacking from our existing ODOT manuals and work to make revisions, rather than adding another two books onto our huge existing stack of advisory documents. It seems like things are a lot more likely to be implemented if they’re all in one place alongside all the other standards.

In a way, NACTO’s design guides are the standardized tests of the bike/pedestrian planning world, but maybe Oregon is already among the gifted and talented. It’d be interesting to hear other perspectives on this.

I did a webinar on using it last fall and have read through the design guidelines. It is very straight forward I thought and not difficult to use if you are “in the know” when it comes to transportation. It certainly helped me wrap my head around the possibilities for East Burnside.

The ODOT guide indicates that sharrows should be limited to low traffic and low speed streets. This is completely ridiculous. Sharrows and super sharrows are effective infrastructure for transition zones and commercial streets that are too constrained for other facilities (without major reconstruction). Moreover, the sharrowing of Market in SF was closely correlated with a massive increase in cycling mode share on this route (the most heavily used route in SF).

A report from ALTA before Birk started drinking the copenhagenize kool aid:

And bike mode share still increased dramatically throughout SF after they were under a four-year moratorium preventing essentially any future bike infrastructure from being built.

It’s hard to correlate the two.

there is no excuse for having so many major bike routes (e.g. SE 20th, hawthorne, alberta, NW 21st, SE 13th/milwaukie etc.) that lack any bike infrastructure at all. just because you may be ideologically opposed to sharrows (and bikes may use full lane signs) does not mean that they are not useful to other cyclists.

Do they have to be mutually exclusive? It seems like the NACTO guides are more for cities and ODOT’s jurisdiction is less urban. If ODOT endorses NACTO I can see it lending momentum to the local Oregon cities and towns that want to invest in human friendly transportation.

How about encouraging the police to lay a heavier hand on motorist behavior? Drivers have become something like a top of the food chain predator with no natural enemies–yes, I’m speaking about drivers as if they/we are not human beings–and need a predator above them to fear.
Driver behavior and our collective unwillingness to really try and control it is the key that nobody’s willing to pick up and stick in the lock.

Dave…excellent point but not really the focus of the narrow question of this short article. Keep it on task. Thanks.

Don’t discount the effect that ODOT adopting the NACTO guidelines will have on the rest of the state.
This is a statewide issue not a “we got ours, screw the rest you” situation.

Certain parts of Oregon (almost everything outside the Portland metro area) are much more red than blue, rural rather than urban but if we make every ODOT level decision all about us to the exclusion of the rest of Oregon we can’t really expect them to support us when we ask.

I love how whenever ODOT does anything outside the normal build and expand roads, it’s always in and around Portland (plus some for Eugene and Corvallis). For the rest of the state it’s business as usual. It gets worse as one moves farther south.

In Salem, ODOT, with the help of some short-sighted politicians and the Chambers of Commerce, keeps pushing a third bridge that we don’t need and can’t afford. Within the Salem-Keizer city limits we have roads widths at highway standards because they were thrown into the National Highway System and ODOT didn’t point out to the Legislature and the federal DOT that these are urban roads not highways. This is the situation in many cities throughout the state.

Frankly I’m done hearing how great ODOT is. Until they stop spending anymore money on new road construction or widening they’re not much better than any other state’s DOT. Just because people in Portland get to see the good side of ODOT doesn’t mean the agency is good.

And one more thing, ODOT has at least three buildings/complexes in Salem. Does the agency really need that much space? Most of them are auto-centric development and take land off the tax rolls because the are state-owned.

Vote Up0Vote Down
« Time to get excited for the 2014 Disaster Relief Trials (watch new promo video)
After host network failure, we’re back from the dead »