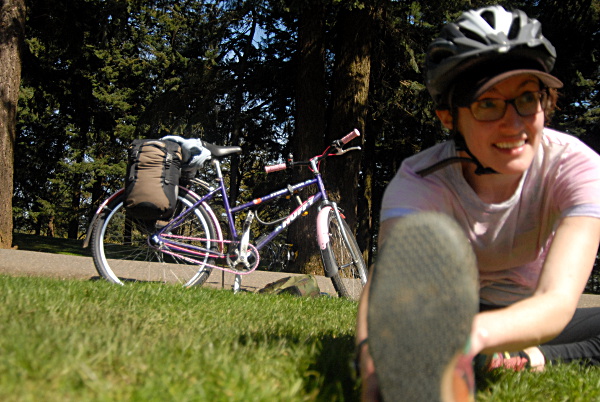 Every day, Rachael Pecore-Valdez trains by riding her 26-year-old Huffy to the top of Mount Tabor.
(Photos by M.Andersen/BikePortland)

Rachael Pecore-Valdez said her husband, for one, is thrilled that she’s finally coming around to bikes.

She’s a little nervous herself. For someone whose longest bike trip ever is 40 miles to Sauvie Island and back, a 1,200-mile, five-week mountain bike trek across most of Oregon will be, well, a leap.

“It’s going to be painful,” she said. 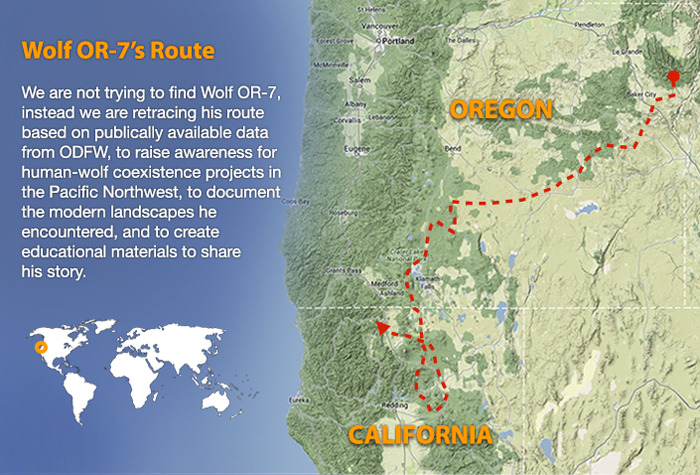 (Image by the Wolf OR-7 Expedition)

Pecore-Valdez, 36, leaves Portland May 17 as part of a six-person crew that’s headed into the wilderness on bike, foot and van to follow the rough trail of OR-7, one of 64 wolves known to be living in Oregon right now. Though she doesn’t hope or expect to find the four-year-old male, who made national news in 2011 as the state tracked him through the wilderness, she and her team are hoping to produce videos, photos and a blog that’ll help spread awareness of wolves.

To prepare, Pecore-Valdez has been riding from her Southeast Portland home to the top of Mount Tabor almost every day for a month. She rides Riona, the battered purple 3-speed Huffy that her mother bought for her when she was 10.

“I didn’t choose the colors,” she said Thursday as she pulled Riona out of the household’s storage shed. 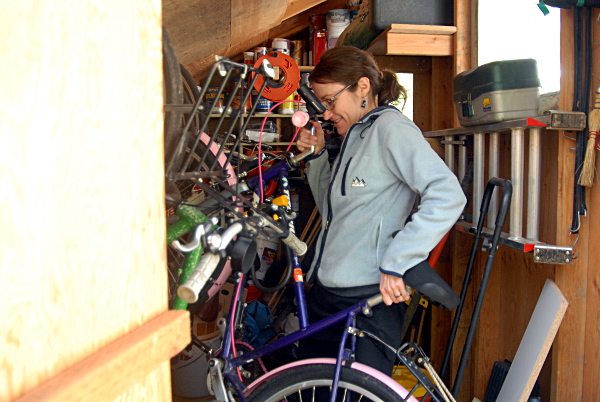 Born in Aurora, Ore., Pecore-Valdez attended high school in Garibaldi and college at Oregon State University in Corvallis. She and her husband moved to Portland four years ago. They spent last year in Berlin and Freiburg, Germany, where he was working in renewable energy — and she was starting to enjoy biking for the first time in her adult life, thanks to Berlin’s comfortable system of raised bikeways.

“I had time to dream,” Pecore-Valdez said. “And this is what I came up with.”

Wolves are also returning to Germany as they are to the West Coast, she said, and have again become a bigger part of the country’s culture, as they were when the Grimm Brothers collected the folk stories that still shape public perceptions of the animal. Meanwhile, Pecore-Valdez, who had previously worked with aquatic wildlife as part of SOLV‘s beach cleanups, was becoming more interested in wildlife preservation.

“I had a moment of despair, I call it, at the 1500 species that are on the U.S. endangered list,” she said. “There are 64 known wolves in Oregon, up from zero in the 90s, and four breeding pairs. We need four breeding pairs for four years in order to get them off the endangered species list for Northeast Oregon.”

She hopes that by using bikes to learn more about the daily lives of wolves, the OR-7 expedition will help more Oregonians prepare for the return of wolves rather than fearing it. They’ve launched a Kickstarter campaign with the goal of raising enough money for a film documentary about the trip. But even if that doesn’t succeed, donations from media group Xplore and the UK-based Sculpt the Future Foundation will cover the team’s expenses for the trip. 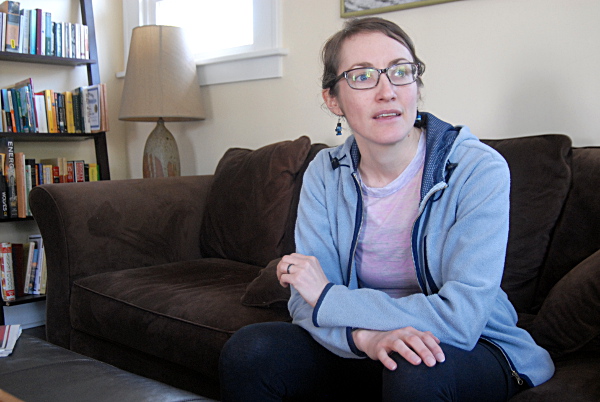 “The Kickstarter is really a matter of, do people want to come along?” she explained.

Pecore-Valdez is also gathering the names of teachers whose classrooms might want to follow along, either in real time or next fall, after the expedition is complete. She’s also hoping to find a donor who could contribute or sponsor the purchase or rental of two mountain bikes — one for her and one for another team member. (To get in touch, email rachaelgeneva@gmail.com.) 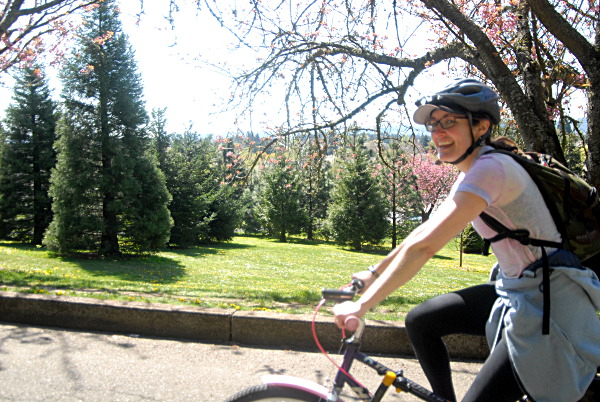 I joined Pecore-Valdez Thursday for her daily ride up Tabor.

“I really don’t like exercise,” she confessed as she stretched out to do a few pushups at the top of the hill. (She can do five.) “It doesn’t come naturally to me. But 1,200 miles is pretty terrifying, so I’m getting it together.”

Though she lives in a house with three other people, Pecore-Valdez says she doesn’t much care for large cities. But she’s fascinated by the amount of public controversy about wolves, especially between urban and rural populations.

“My untested hypothesis is that how a person views wolves is similar to how they’ll view the wilderness,” she said. “If they view the wilderness as an uncontrollable, unpredictable monster or if it’s a place where you’re free and peaceful and birds eat out of your hand.”

In any case, she’s eager to finish her adventure with a more nuanced view of wolves herself. And if nothing else, her two months of training are putting more miles on her bike’s tires than she’s ever put on them before. 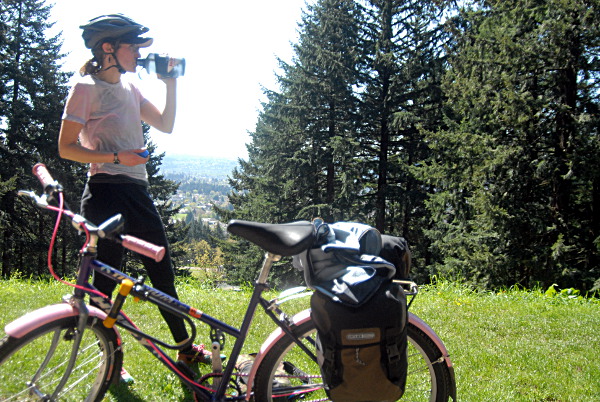 Not sure I’d agree with your first sentence, but 35 miles a day for five weeks is going to kill that bicycle.

“…is going to kill that bicycle
Hardly. You forgot about the pink chain. It has special powers.

Well the story says she’ll purchase or rent a mountain bike for the trip.

I wouldn’t go 3 blocks on a Huffy. Take one apart and look at the joints.

Uch, who cares about the bike. Sounds like an awesome trip!

“My untested hypothesis is that how a person views wolves is similar to how they’ll view the wilderness,” she said. “If they view the wilderness as an uncontrollable, unpredictable monster or if it’s a place where you’re free and peaceful and birds eat out of your hand.”

Neither of these views of wilderness are complete.

There is also another view of wolves, held by ranchers who live in rural areas. Many people who live in eastern Oregon are comfortable hunting, fishing and camping in the wilderness, but they don’t have a romanticized view either. They have a reasonable concern that wolves will kill their calves or sheep.

And their response is to kill them all so they can graze their livestock on a diminished public land without predators.

GO GIRL YOU ARE AMAZING! We want to follow you!