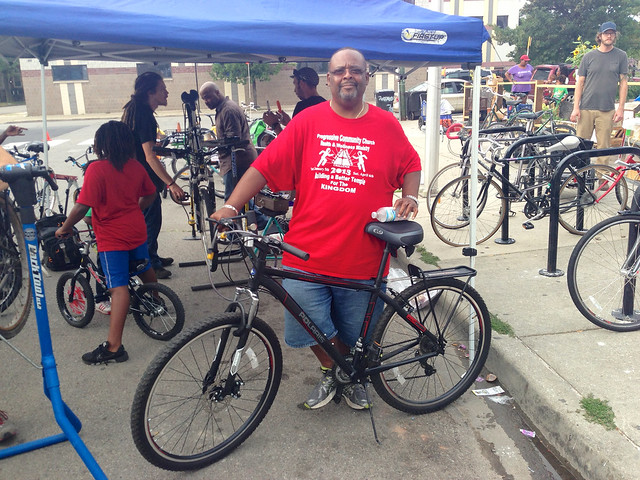 Can a Portland-brewed program that uses free events, maps and T-shirts to get people informed and enthused about biking and walking work on the inner south side of Chicago?

With the help of two experts from Portland’s top bike planning firm and two advocates in Chicago’s Bronzeville community, the City of Chicago is trying.

In the first pilot of a new initiative this fall and spring, Chicago gave Alta Planning’s Jessica Roberts and Cathy Cibor three months and $200,000 to create a customized, temporary version of Portland’s Smart Trips program in a mixed-income, overwhelmingly African-American community where bikes have never been a big part of city life.

The results, Bronzeville advocate LaKeisha Hamilton said, are showing that though the sticking points may be different — one bundle of T-shirts had to be redesigned after organizers realized a six-pointed star was a local gang symbol — biking is an idea too powerful for this community to ignore.

It’s a story that could return lessons to Portland, too. 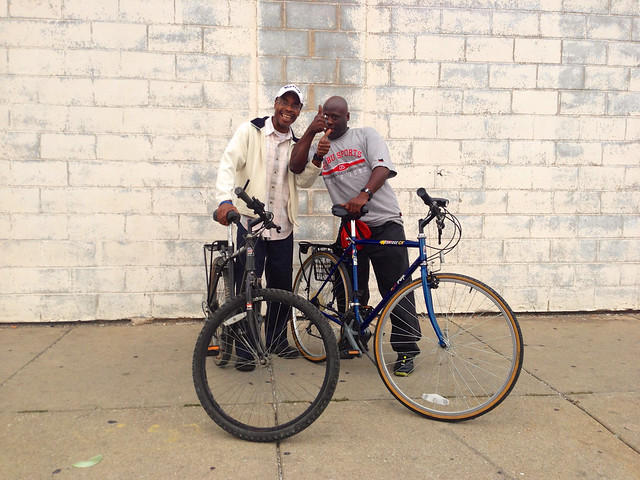 Hamilton, 36, had once lived in Bronzeville and now lives in an adjoining neighborhood. But she was confused when she heard the city was looking to hire two community members to distribute free information about biking, walking and public transit.

“It was like really? Bronzeville? Really?” she said in an interview last week.

One of the oldest African-American communities in the northern U.S., Bronzeville was a hub of black culture from the 1910s onward. Today, it’s also the site of cultural collision between well-off black people moving into its historic homes near downtown Chicago and longtime black residents, many of them low-income.

It’s not, Hamilton said, a place where low-car transportation is often seen as desirable. 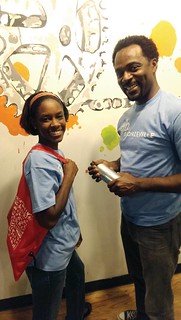 But Hamilton was won over, she said, by seeing the area’s two aldermen, both black, riding bicycles regularly.

So Hamilton, who also works as a Japanese instructor and manages a local after-school program, took a temporary, part-time $15-an-hour job as a community ambassador for “Go Bronzeville“, working with Alta’s Portland-based program managers and an organizer from Chicago’s Active Transportation Alliance.

With her collaborator Ronnie Harris, a third-generation Bronzeville resident who also lived car-free in Sweden before returning to his hometown, Hamilton used the program as a chance to talk to everyone she could about the benefits of building biking and walking into daily life.

Almost everyone they spoke to was skeptical at first.

“With Ronnie and I being of African-American descent, we really looked people in the eye and said, look, we’re not going to argue with you about this,” Hamilton said. “We have obesity in our community. We have diabetes. We need to make some changes.”

But it wasn’t personal health that seemed to really win people in Bronzeville over to thinking about bikes, Hamilton said.

“Our air quality is so bad that they went and got money to come and fix the problem,'” Hamilton would tell residents.

“Every time I spoke I pointed out about the air quality. and people just froze and said, ‘Man, I didn’t think about that.'”
— LaKeisha Hamilton, Go Bronzeville ambassador

It was true; 80 percent of Chicago’s funding for the Bronzeville program came from federal grants tied to the Clean Air Act. As in many communities near freeways — the nearby Dan Ryan Expressway sliced through Bronzeville in 1962 — asthma rates in the area are disproportionately high.

“Every time I spoke I pointed out about the air quality. and people just froze and said, ‘Man, I didn’t think about that,'” Hamilton said. “I saw the light bulbs flicker. … Those were powerful moments for me.”

They were powerful moments for those who heard it, too. “In one week we’d have five meetings to go to, just based on one meeting. ‘Oh, I’ve got to get you to come to my meeting!'” Hamilton recalled. “I was excited that people were getting excited.” 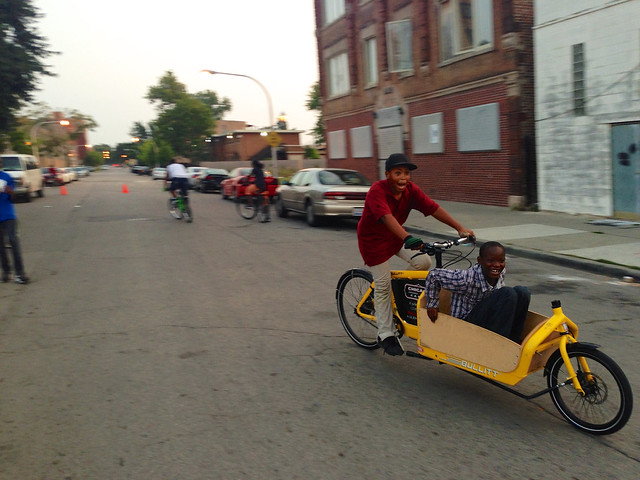 The city is testing its results in Bronzeville this spring with a survey and a tally of how many households requested information about transportation options.

Roberts and Cibor, meanwhile, are moving on to the next phase of Chicago’s program, running a similar short-term program in the mostly Latino Pilsen neighborhood.

“It’s kind of hard to walk away from this neighborhood,” said Roberts, who called the Bronzeville program the most rewarding project of her career.

But Hamilton said that much as Portland’s Smart Trips program has shifted behavior by swarming a quadrant or segment of the city with biking events and resources, Alta’s “Go Bronzeville” has worked by giving black people a chance to see other black people on bicycles.

Bronzeville Bikes, one of the country’s oldest grassroots African-American bike clubs, is now more visible; it’s organizing bike rides on alternate Sundays in the summer. Hamilton said she’s become so enthusiastic about what bikes can do for the community that though her city gig is over, she plans to build biking into her after-school programs.

“I believe that it will grow,” Hamilton said of biking in Bronzeville. “Because residents will actually walk up to me and say, I’m dusting my bike off. I want to be ready for the spring.”

We first read about this project on the terrific Streetsblog Chicago. Thanks to their contributor Steven Vance for the first-rate photos above.

One thing in the story that stood out to me was how powerful a single person’s example is (or in this case 2 people). “…Hamilton was won over by seeing the area’s two aldermen riding bicycles regularly.” I’ve often thought the same when I ride (or see someone else riding) in outer East Portland where it’s not as common. Won over by simply seeing 2 people riding their bikes. That really says something.

Good to see things like this. Where I grew up there was one large African-American cycling club and two Mexican ones–this was SoCal in the late 1960’s and early 70’s.

Love this story. Would love to sit down with Cathy and Jessica to learn more. Thanks, Jonathan.

Glad you liked the story Linda. I’m sure they’d be happy to chat with you more about the program. And thank Michael next time you see him. This story was his from the start. I simply said Heck Yes! when he asked to do it and then I just pushed the “Publish” button. 😉

“One of the oldest African-American communities in the northern U.S., Bronzeville was a hub of black culture from the 1910s onward. Today, it’s the site of cultural collision between well-off black people moving into its historic homes near downtown Chicago and longtime black residents, many of them low-income.”

Why have white people from outside the Bronzeville community gotten federal funded to implement this bike program in Bronzeville, when there are life long cyclist like myself, who operate effective not for profit heritage tourism and Eco-tourism development programs in Bronzeville that could have administered this program?

For the past decade Bronzeville residents have conducted its own annual bike tour of Bronzeville that struggles to secure funding and sponsorship every year.

Could this be white supremacy, institutional racism and a deeper, more insidious re gentrification program at work in Bronzeville to disenfranchise and remove its lower income residents?

Bronzeville in 2014, is an international hub of black culture!!!

Good points, Harold! I didn’t mean to imply that the neighborhood is no longer a hub of black culture, so I’ve added “also” to the sentence about the cultural clash to clarify this. I’d love to know more, though — is the longtime resident-run bike tour organized by Bronzeville Bikes, the group mentioned in this post, or is there another organized ride group as well?

I believe Harold was talking about the annual bike tour of historic Bronzeville, organized by BARCC, the Bronzeville Area Residents and Commerce Council.