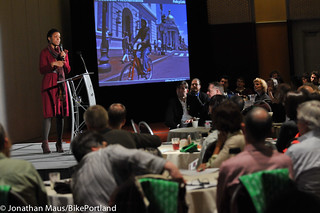 Good conferences are like good cities: the most interesting things usually happen between schedules and around edges. For a transportation conference here in Portland, that probably goes double.

The two-day Oregon Active Transportation Summit, which starts one week from Monday, is filling out its schedule and the official agenda has some must-see keynotes and lots of breakout sessions that will be informative and inspirational (if past year’s are any indication). But there are two events not on the agenda that you should definitely plan to attend.

Learn more about them below the jump…

The event itself is all day at the Sentinel Hotel (the former Governor Hotel) at 614 SW 11th on April 21-22. Monday will be plenaries and breakout sessions; Tuesday will be professional trainings and mobile workshops. The cost is $85, which includes one continental breakfast and one plated lunch, with some scholarships available.

It’s worth noting that the Monday night event is a Pecha Kucha and a party. Come for the thinks, stay for the drinks.

This is a great opportunity to crash OATS if you’re not attending the official event.